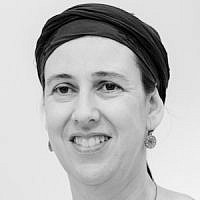 The Blogs
Ruth Wellins
Apply for a Blog
Advertisement
Please note that the posts on The Blogs are contributed by third parties. The opinions, facts and any media content in them are presented solely by the authors, and neither The Times of Israel nor its partners assume any responsibility for them. Please contact us in case of abuse. In case of abuse,
Report this post.

Twelve year old Shira was a big Moshe Peretz fan. She was living in an emergency shelter for children who had been removed from their families due to abuse or neglect. She was so excited when she heard that her favourite Mizrachi music (Middle Eastern-style) singer had agreed to come and play some songs at the home. She made a very special picture for him to show him how much it meant to her that he was coming to perform for them. The big day arrived and Moshe came to the home. She loved the music and was delighted to meet the handsome young singer, and shyly gave him the picture she had made for him.

Ten years on, Shira is now a graduate of Orr Shalom and learning for her degree. Since she is over 18 she doesn’t live in a foster home any more, but lives in an apartment with friends. She is still supported by our therapy staff and social workers who are helping her to find her way in the world and to ‘hold her hand’ as she starts her life as an independent young adult. We often take for granted how much our parents and family help us out, and even as adults we would find it very hard to be completely alone in the world. Orr Shalom mentors stay with our graduates and keep in contact, so they have someone who cares about them and can guide them through life’s important decisions as well as the day to day grind. They understand the specific problems (financial, bureaucratic and psychological) of children who have been through foster care.

Of course when Shira heard that Moshe Peretz was going to be performing at our 35th anniversary gala fundraiser, she was one of the first graduates to volunteer to help at the event. It was an amazing evening, with a Tel Aviv hotspot hosting 500 supporters of Orr Shalom who enjoyed gourmet food, presentations to our top volunteers, and the highlight; the wonderful music of Moshe Peretz and his band. Everyone danced, sang and had a great time, and the evening was a huge success.

At the end of the performance Shira made her way behind stage and looked for the famous singer. She found him in a quiet corner and said “You won’t remember me, but I’m Shira and I gave you a picture when you came to sing at our emergency shelter ten years ago…” He gently interrupted her, smiled and said “Of course I remember you Shira, I think of you every day when I look at that picture which hangs on my wall. I had it framed and have taken it with me to each new home. It is my ‘good luck charm’ that reminds me who I am and why I am here. I don’t think I would be where I am today if it wasn’t for that picture.” He called over the band manager and asked him to describe to the amazed girl the picture that hangs on the wall by his door. The manager said “It’s the picture by the girl we played for at the emergency shelter!”

Shira couldn’t believe what she was hearing. She was sure that this big pop star had forgotten all about her and never given her another thought. His words touched her heart and she realized that she was actually someone rather special, who could make a difference even to the famous singer Moshe Peretz.

About the Author
I have lived in Israel for 20 years, mostly in Anglo communities, and currently living in Bet Shemesh. I recently walked away from my job in the accountancy sector to do something more meaningful and challenging, and love my new job in Orr Shalom, helping children who have suffered from terrible abuse and neglect. I'm hopefully making a difference to their lives, and I would like to share their stories.
Comments