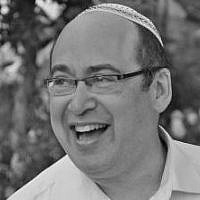 The Blogs
Lenny Solomon
Apply for a Blog
Please note that the posts on The Blogs are contributed by third parties. The opinions, facts and any media content in them are presented solely by the authors, and neither The Times of Israel nor its partners assume any responsibility for them. Please contact us in case of abuse. In case of abuse,
Report this post.

I was in South Bend, Indiana around a month ago for Shabbat. For those who are new to this blog and myself and my band Shlock Rock, I have actually been all over the world performing for the last thirty years. I have played all 50 states and many many cities!  It has been such an out of the box interesting career. I could tell you plenty of concert stories. But not in this column.

I was in South Bend to play a Lag B’omer party and happened to come for Shabbat as well. During Shabbat I was the cantor during Mussaf which is usually the case when I am in a community. A friend from South Bend who happened to be an Israeli named Moshe Katz, comes up to me and asks if he can sing the blessing for the protection of the Israel Defense Forces. I said sure go ahead. Before he did it — he said to me — you will record it!  And he proceeded to sing the blessing to the tune of “You Raise Me Up”.  The popular song which was written originally by Rolf Lovland, with lyrics by Brendan Graham. The song was re-recorded by Josh Groban and the British band, Westlife, among others. Both of those versions are fantastic.  I really loved it. The melody is fantastic. It gives you shivers!

Anyway, I got back to Israel and started working on it. I finally got it to the point where all the words fit in and the melody flowed as best as possible.  I recorded a piano demo of just myself singing and playing. The next Shabbat I was the cantor in my Synagogue and I decided to test it out!  I sang the prayer with that melody.

Needless to say, after synagogue, people came up to me and said things like “You brought me to tears”, or “That was the most beautiful rendition of the prayer for the Israeli soldiers that I have ever heard.”  Really, a fantastic dress rehearsal!  Now the next step was to record it.  Moshe Katz from South Bend was right.  It was worthy of being recorded.

However, this is where the story ends. In order to record this song, permission was needed from the two writers. Within one week of myself applying for permission, they said no. They simply do not want the words changed. I can’t really blame them. For me, it is disappointing. But there will be other songs! The melody goes straight to the soul. And with or without words it is possible to raise your soul higher! This is one of the secrets and purposes of Shlock Rock.  Until next time!

About the Author
Lenny Solomon has performed over 2000 concerts worldwide and has recorded and released 40 albums since 1984 with his band Kesher and his band Shlock Rock. He lives in Bet Shemesh, Israel with his wife and four daughters and one son in law. His goal is to reach out and educate the Jewish people scattered to the 4 corners of the earth through Music and Media. He is also currently producing a movie/musical on the book of Daniel called Daniel in Babylon.
Comments