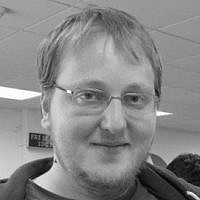 The Blogs
James Genn
Apply for a Blog
Please note that the posts on The Blogs are contributed by third parties. The opinions, facts and any media content in them are presented solely by the authors, and neither The Times of Israel nor its partners assume any responsibility for them. Please contact us in case of abuse. In case of abuse,
Report this post.

Quick Introduction: I made Aliyah in December 2014. A lot of my friends back in England, as well as here in Israel thought it would never happen…one of the reasons for the delay was my infuriation with Israel’s centrist and centrist-right community and their shift to the extreme right (disclosure: I used to be a Likud supporter and even considered being a member despite living in England, then I saw the political light).

I’m currently living in a Mercaz Klita (absorption centre) in Jerusalem, where I am learning Hebrew at one of the top Ulpanot (specialist Hebrew teaching schools) in the country. This particular Ulpan requires applicants to be in the age range of 20-35 and have college degrees. In general, we are all quite clever people…one issue does exist though, political arrogance and ignorance.

During our particular semester of Ulpan, the 2015 Israeli Elections took place, in which Likud gained a mass of seats, becoming the largest party by a sizable chunk. In the weeks leading up to the elections, a lot of the chatter between the students at Ulpan involved party politics and who people would vote for. I want to make it clear, people can vote for whoever they want, they just need to be able to justify it with a genuine reason. Unfortunately, the most common reason I heard for people who said they are voting for Likud is (to paraphrase) that ‘only Bibi (Netanyahu) and Likud can keep us safe from further rocket attacks and terrorist groups in Gaza, and that the Zionist Union will just give away land no matter what the consequences’

Sorry, what?!?! Is this based on any facts at all? As someone who takes pride in being reasonably educated in Israeli political allow me to analyse these two statements.

Actually, Zionist Union is the only party that is open to negotiations rather than (at least in rhetoric) emphatically saying give it away or keep it all. Being willing to negotiate a land deal is not the same thing as being willing to give away all the land. It is also worth noting that both major land deals in Israel’s history have come during a Right/Centrist-Right government (Begin with Egypt in 1978, and Sharon with PA (Gaza) in 2005)

Likud will keep us safe

I wish there would be faith in all parties to keep us safe. I have faith in Likud to do their best to keep us safe, but the idea that only one party has Israeli citizens interests at heart is beyond ridiculous. The fact is that since Bibi’s election there have been more and more rocket attacks, and a constant increase in terrorist attacks and warning levels.

Additionally, this government seems to be pursuing an isolationist policy and weakening relations with both the USA and the EU, damaging Israel’s credibility on the world stage.

I really have faith in Israel and Israelis to be able to get through these troubles, but as of today, 26th May 2015, the rockets have started falling in the South again a mere 9 months after the last period of increased, intense violence.

I hope for peace in the area, and open the floor for somebody to prove me wrong, but I can’t see The Right being right any longer…

About the Author
A veteran of IDF International Cooperation Division, and a Master's in Security and Diplomacy from Tel Aviv University, as well as an oleh of several years, planning to use this blog to explore issues of life in Israel, Israel's diplomatic and strategic position in the world, and other stories from personal life.
Related Topics
Related Posts
Comments