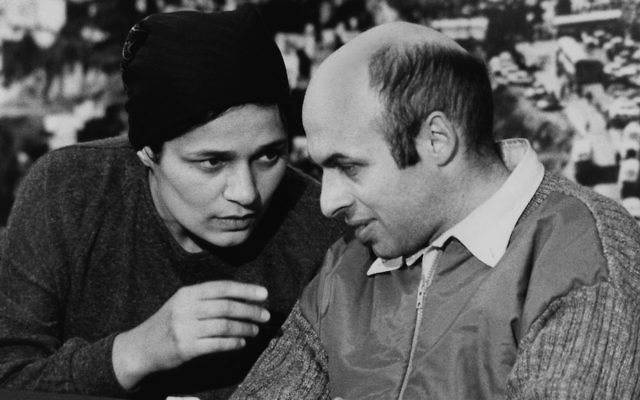 My parents. Former Soviet refusenik and prisoner, Israeli politician, human rights activist, and author Natan Sharansky, with his wife, Avital, after his release from prison in the Soviet Union. He landed in Israel on February 11, 1986. (Moshe Shai/FLASH90.)

I would not exist if it weren’t for you.

When my father, Natan Sharansky, was arrested by the KGB, many rational observers thought his life was over. Some even approached my mother, who had left Russia three years earlier and was waiting for him in Israel, and encouraged her to move on with her life.

When one man stands against an empire, they told her, what are the odds that he will win?

They saw a man standing alone against an empire.

They failed to see that he wasn’t alone at all.

They failed, in short, to see YOU.

You marched in rallies. You wrote letters to your congressmen. You chained yourselves to Soviet consulates in the US, and released mice in a performance of the Moscow Ballet in London, and got your elected officials to issue official statements of support, and generally made it so that when Gorbachev tried to talk policy with President Reagan in Washington, the latter could point at a huge protest right out his window and say, “You can say whatever you want, but my people believe this lady [my mother]” and demand my father’s release.

Here’s the thing: You ALL did.

It doesn’t mean I always agree with all of you (that would be impossible by definition, since you vary). But it does mean that even when I disagree with you, I know: you are my people. You are flesh of my flesh. You are those who care about your brethren. You PROVED it.

ALL of you did.

I can never pay you back. Nor is it the kind of debt one repays.

All I can do is stand here and remember and remind you, as well: we are one people. Even when we disagree.

About the Author
Rachel is a Jerusalem-born writer and speaker who's in love with her city's vibrant human scene. She writes about Judaism, parenting and life in Israel for the Times of Israel and Kveller, and explores storytelling in the bible as a teacher and on 929.
Related Topics
Related Posts
Rachel Sharansky Danziger
Comments