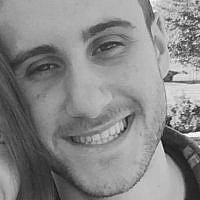 The Blogs
Aaron Bondar
Apply for a Blog
Advertisement
Please note that the posts on The Blogs are contributed by third parties. The opinions, facts and any media content in them are presented solely by the authors, and neither The Times of Israel nor its partners assume any responsibility for them. Please contact us in case of abuse. In case of abuse,
Report this post.

My grandmother is an older woman. She is 89 years old, and yet she is stronger, braver, and more resilient than I will ever be. By the time she was twenty years old she’d withstood the harsh erosion of horror and humiliation, had lost her love only to find him again in the sands of Israel. She looked death in the face and did not tremble; not when her sister was taken, and not when her mother died on a cold death march. These women are not faceless. They were people. They were my people. They are my family, my cousins and grandmother and my aunt. And we have failed them.

Seventy years have gone by since quiet settled over Europe and the true toll of the Holocaust was bared naked for the world. In camps and in mass graves; in piles of ash and blackened crematoria. Clutching at wire fences, all white skin and harsh bone, the truth of genocide stared humanity in the face and demanded, with weak but brave voices, the justice they deserved. “You failed us once,” they seemed to say. “Will you do so again?”

When American General Dwight D. Eisenhower visited the first concentration camp liberated by the American Army,Ohrduf, he demanded that journalists be flown in to take all the pictures they could, in order to “give first-hand evidence of these things if ever, in the future, there develops a tendency to charge these allegations merely to ‘propaganda.'”

Those who have died will remain dead, no matter how many tears we shed at a memorial service or how many stand in attention at a siren. We can keep our loved ones alive in our hearts by the force of our memories, but that is not enough. It is an insult to their memories to think that they, the victims of the Holocaust, would be satisfied with just being remembered. The weight of the crimes of the Holocaust demand more than the planting of memorial trees; it demands more than a single day of simple remembrance. Those pictures of mass graves and mutilated, emaciated bodies piled one atop the other are not objects of weakness and grief. They are demands. They command us to not only remember them, but to remember also their murderers and how it came to be that humans could be slaughtered by the millions. They warn us that if we not keep a watchful eye, if we do not keep sentry over the beasts and demons that reside within all of us, we will let this happen again, and in doing so commit the crime of witnessing. We can no longer just be testifiers. “You must be rebukers,” they scream. “You must be justice-makers.” Seventy years after the Holocaust, it’s time for us to ourselves important questions; have we heeded their call? Have we respected their memories with the memorial of action? Have we suffered the burden with the rest of mankind, or have we let the weight slip from our shoulders, awed now by how simple it was to let go and how much more upright we walk when uninhibited by responsibility? Have those images made homes in our minds, or have we banished them to a dark corner, taking them out only when necessary, and pretending that that is enough? Do our hearts beat softer in their loss? Do our bodies cry out for justice as they would for oxygen? Do we feel them walking beside us, whispering all the while their strong but desperate plea that we remember and act?

The Tutsis know the answer. The people of Darfur know the answer. The Armenians know the answer. The Muslims of Bosnia know the answer. Time and time again, the world has shown itself to have learned nothing from the lessons of the Holocaust. Our brother’s blood calls out to us from the soil, and we are silent to his distress. A humanity that forgets its sins and its sons deserves not its progress nor its future. Our lazy memorial and global inaction are an insult to the survivors and a disgrace to those who perished in the flames of the Holocaust. It is easy to remember; it is hard to act. Even with our services and our sirens and our museums we have done the very minimum, the very absolute least, we could do for the survivors and the memory of the Holocaust. And then we pat ourselves on the back and congratulate each other on a job well done and a world well ordered and return to our homes feeling guiltless. It is a selfish process to rid ourselves of the hardship of grief while others still fight in the struggle against genocide and death.

When my grandmother was 19, she faced Auschwitz and Mengele and Death in all his adornments. She looked genocide in the face and did not tremble. Humanity, on the other hand, has not even the courage to look genocide in the face and call it what it is. Instead we hide and we evade and people die and nothing changes. Certainly we haven’t changed. We still act as witnesses, we still “testify”.

Now ask yourself this; When does a witness become an accomplice?

Seventy years on and we have done nothing concrete to atone for the sins we committed and allowed to be committed. The battle for justice against criminality and genocide started in the Nuremberg Trials, but some times I wonder if the hunt for justice wasn’t the last victim of the Holocaust.

Our brother’s blood calls out to us; From Rwanda and Armenia, from Bosnia and Sudan, from ash and bone and mass graves. Every year, we stand as witness to the Holocaust and beg our ancestors for forgiveness for not having done more; a global humanity stands in attention to plead and ask forgiveness.

Now ask yourself one final question:

Do we even deserve it?