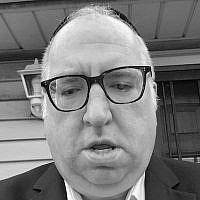 The Blogs
Rodney Weiss
Apply for a Blog
Advertisement
Please note that the posts on The Blogs are contributed by third parties. The opinions, facts and any media content in them are presented solely by the authors, and neither The Times of Israel nor its partners assume any responsibility for them. Please contact us in case of abuse. In case of abuse,
Report this post.

On August 23, 2022, as part of the ongoing litigation between a group of students and Yeshiva University, the court ruled that Yeshiva University must immediately recognize the YU Pride Alliance as an official campus club rather than being allowed to wait until the appeals process has been completed.

As a very proud YU alumnus, I want to share a perspective on this topic. I am also putting out a request to those who are pushing this agenda to seriously reconsider their position, consider the impact of their actions on others such as myself, and appreciate what YU has truly represented to the Torah world for more than 100 years.

In the fall of 1983, I began a journey that has left an indelible mark on my life. It was the day that I came to Yeshiva University High School for Boys. I remember that it was a short time before Rosh Hashana and Rabbi Yitzchak Cohen, my ninth grade rebbe, taught us about Teshuvah and how to connect to Hashem through learning Torah. The journey over the next eleven years was paved with gold as I was fortunate enough to have the opportunity to learn from some of the greatest Torah scholars of our generation. These Rebbeim taught and guided me on my journey of Avodas Hashem (service of Hashem) which has included my lifetime commitment to the Rabbanus and Jewish Education. I remember the excitement and feeling of seeing Rabbi Soloveitchik z”l, at the Yeshiva. Although at the time the Rov’s health was failing, the mere presence of the Rov on campus created a sense of Kedusha unlike any other I have ever experienced. We were heirs to the great Yeshiva of Volozhin and the “Shalsheles HaMesorah” (The Chain of the Mesorah) going back generation upon generation.

When the Rov passed away, the next 30 days were spent with presentations of eulogy after eulogy from the Roshei Yeshiva expressing just how much the Rov meant to Yeshiva University, the world of Torah, and Orthodox Judaism. I remember the excitement of the visit of the Rishon l’Tzion HaRav Ovadiyah Yosef z’l and the shiur he gave to a packed Bais Medrash. I remember watching in awe the Mesiras Nefesh (selflessness) of Rabbi Ahron Soloveichik z’l who, despite his disabilities, came every week from Chicago to give his Shuirim. Watching Rav Ahron walk through the Beis Medrash using his walker is a sight that none of us will ever forget.  When Rav Norman Lamm, z”l passed away a few short years ago, I realized that the firm establishment of Yeshiva University as a Makom Torah was his legacy. Rav Lamm, through his legendary efforts, created a place where Limud and Shemiras HaTorah (learning and observance of Torah) not only had a place in the Modern Orthodox world but the ability for it to thrive.

At my personal Chag Hasemicha in 1997, we marched down the street and into the Nathan Lamport auditorium to the tune “Baruch Elokaynu”, extoling the values of Torah and thanking Hashem for giving it to us. Yes, this is the Yeshiva University from which I proudly earned 4 degrees.

There are two more memories that I would like to share. Who could forget the Chanukah and Purim Chagigot (celebrations) when Rav Dovid Lifschitz, z”l would enter the packed Bais Medrash accompanied by scores of his students, come to the middle of the circle of the dancing, and sing “V’taher Libaynu L’avdicha Bemes, (purify our heart to serve You sincerely). This is the Yeshiva University that has touched the lives of countless people. If one looks around the world, at the many Rabbanim and Magidei Shuir, as well as simply the average Baal Habatim committed to a life of Torah, one will see the massive success of the place that we call “Our Yeshiva”.

For almost twenty years, I had the privilege of being the Baal Tefilla at the YU Bais Medrash on the first night of Selichos. Who can forget the Divrei Chizuk (words of inspiration) of both Rav Yosef Blau and Rav Meir Goldvicht followed by the sounds of the Selichos that reverberated through the room demanding us to achieve higher levels of spirituality. When one davens Selichos at YU, Hashem’s presence can be felt, and we are moved and inspired by this special evening. I can go on and on, but I want to present just a small taste of what Yeshiva University means to me and so many others. It has been a place where we grew and came close to Hashem and took this with us as we began our lives outside the Yeshiva. No matter how long it has been since we were there daily, it was and remains to this day, our home.

Recently, there has been an attack on my home by people who have taken their demands to a new level. They sued YU in order to strong arm them to accept them and allow them to have their club and the courts, for whatever reasons, are forcing YU to comply. The question I ask with tears in my eyes is “why”? As I have shared above, YU has been such a special place, a home to so many dedicated to the study and observance of Torah. Why is there a need to go there and drag in things which are not in accordance with a Torah way of life? Why demand that the Yeshiva community violate our own beliefs, convictions, and principles to conform with those in direct conflict to our own? Any of the individuals who wish to come to join the Yeshiva should be welcomed and given an environment safe from harassment and discrimination. We should absolutely empathize with this group and their desire to be accepted. We should absolutely invite them into shul, the Bais Medrash, and our smachot, but to come to a place that one knows is an institution that inextricably binds itself to Torah and Orthodox Judaism is unfair.

As we have just left the period of the Three Weeks and are begging the month of Elul and season of the Yomim Noraim (Days of Awe), I beg those involved in this lawsuit to take a step back, recognize what Yeshiva means to so many people and to the Jewish world, and reconsider their approach. Though there is still much work to be done in this area, please know that we do respect you as individuals and we empathize with your struggle for acceptance. I beg you to take a moment to reflect on what you are fighting for and to realize that what you ask is just simply impossible and unattainable under the umbrella of a Yeshiva. I beg you to leave our Yeshiva alone allow it to remain the Yeshiva it has always has been, to continue its mission to produce Bnei and Bnos Torah that will impact the Jewish community for generations to come, through the legacy of its past luminaries and the potential of the budding Jewish leaders.

As we now have entered  Chodesh Elul, now is the time to reflect on this idea and may Hashem grant us a year of protection and salvation and may He send us Mashiach speedily in our day in the merit of the Kavod HaTorah and preservation of its Kedusha.

About the Author
I am a Rabbi of a shul in Brooklyn and have been in Jewish education for almost 30 years. I have 4 degrees from Yeshiva University including semicha and a Masters. I am married with 3 children. I am the Rov of Merkaz Yisroel of Marine Park, part of the Judaic Studies faculty of HAFTR and Touro College.