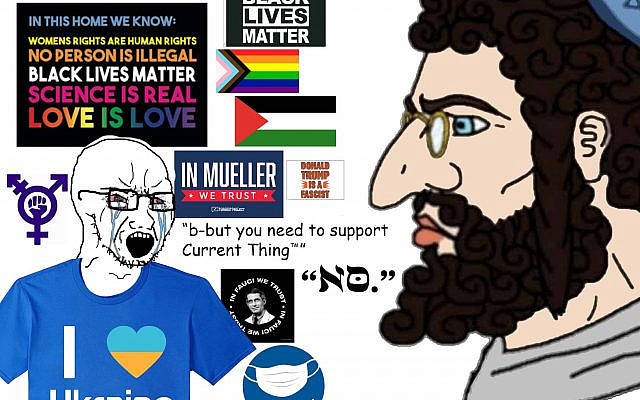 It seems like Jewish organizations cannot bend over backward fast enough to praise Ukrainian President Volodymyr Zelenskyy, who happens to be Jewish, as the Jewish hero of our time. While there is surely something admirable in leading a country through a staling invasion by an economic third-world country, I don’t see Zelenskyy as this generation’s Jewish hero, or any Jewish hero at all.

Yes, Volodymyr Zelenskyy does not behave in the way one would expect a Jewish hero to behave. He married a non-Jewish woman named Olena in 2003 and Baptized their children in a Russian Orthodox Church. He openly celebrates such holidays as “the Day of Christianization of Kievan Rus-Ukraine,” a holiday marking the establishment of Christianity as the official region of Kievan Rus in 987, and, by all accounts, religiously identifies as a Christian, not a Jew.

The way Zelenskyy entered the office is equally disqualifying towards his proposed status as a Jewish hero. In Ukraine, a country rife with antisemitism historically and today, Zelenskyy needed all the help he could get to get elected. He got this help largely from Ukrainian neo-Nazis and their allies, like political kingmaker Arsten Avakov, willing to compromise to present a united front against Russia. Even today, Zelenskyy continues to pay homage to his coalition, donning the Nazi Iron Cross in interviews and speeches and praise of Ukrainian Nazi and Holocaust collaborator Stepan Bandera.

On such occasion where our alleged Jewish hero donned the Nazi symbol was in his address to the Knesset earlier this week. The speech was a disaster for Zelenskyy, perhaps the turning point for his global perception. In front of Knesset lawmakers and ministers, Zelenskyy equated the Russian invasion to the Holocaust, denied Ukrainian involvement in the Holocaust, and, confusingly, urged Israel to treat Ukrainians the same way Ukrainians treated Jews in the Holocaust (Ukrainians made up much of the SS’ volunteers and lent their land to the building of many of Hitler’s concentration camps). The speech was roundly lambasted nearly unanimously by the Knesset, Arabs and Jews, coalition and opposition.

Despite all of these things, however, Zelenskyy has been praised by mainstream Jewish sources as a Jewish hero, some going as far as to compare him to other Jewish heroes that willingly served in foreign governments, like Yosef and Mordechai. These comparisons really do get to the root of the problem, because despite the rejection of Judaism and Jewishness, the attacks on Israel on the world stage, the embrace of Nazis and Nazism, and Holocaust denial, these comparisons are still dramatically inaccurate, and yet they are still being made.

Take Mordechai, who at the end of Megilat Ester is the vizier to King Ahashverosh. When he is first introduced, he is not introduced as a man of the empire, a  “Farsi”, nor is he introduced as a Jew in a more ethnic sense, an “Ivri” or “Yisraeli”, but as “Ish-Yehudi,” a Jewish man (Esther 2:5). Mordechai is the first figure in the Tanakh to be referred to as a Jew, an explicitly national title, a reference to the royal tribe of Judah, similar to how Chinese nationals refer to themselves as such to honor the historical royal house of Quin. Mordechai is not a Persian, nor is he a hyphenated Persian-Jew or Jewish-Perian, but simply and exclusively Jewish man.

When Mordechai becomes vizier, he keeps this focus and intention. His goals and initiatives as vizier are not for the benefit of Persia but for his nation, specifically their return to Yehud, to their homeland, then a province of the Persian Empire and rebuilding of the Temple (Megillah 16b, Menachot 65a). His leadership may be formally under a foreign government, but it is for the benefit of the Jewish people. This is the same reason Yosef gave for assuming his political post in Egypt:

“Now, do not be distressed or reproach yourselves because you sold me hither; it was to save life that Hashem sent me ahead of you.”

Volodymyr Zelenskyy is not a Jew assuming foreign posts to benefit his people, he is a Jew who has utterly and completely sold out to foreign power and foreign interests. He is a servant of a foreign country, a foreign people, and foreign culture. This is the greatest and most fundamental issue with the Ukrainian president. From that point, a point of complete submission to a foreign power, it is completely understandable why a Jew would marry a non-Jew, Baptize his children, embrace neo-Nazis, reject and attack Israel, and distort and deny the Holocaust.

As much as Volodymyr Zelenskyy would like you to forget, or perhaps does not believe himself, all too many Jews have been violently and unjustly murdered in Ukraine. I hope Zelenskyy is not soon the latest on that long list. Be’ezrat Hashem, Israel will save and bring home the remaining Jews of Ukraine, broker peace between these warring states, and begin to assume its place as the focal player on the world stage.