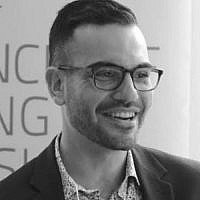 The Blogs
Zachary Schaffer
Apply for a Blog
Please note that the posts on The Blogs are contributed by third parties. The opinions, facts and any media content in them are presented solely by the authors, and neither The Times of Israel nor its partners assume any responsibility for them. Please contact us in case of abuse. In case of abuse,
Report this post.

In the midst of the 2020 election for the 38th World Zionist Congress (WZC), Haaretz Correspondent Anshel Pfeffer writes that we should not “waste time” voting, once again raising his critique that “Zionism is an archaic and misleading term in our day and age.”

Pfeffer is one of many who see Zionism not as a dynamic ideology but as a program that ended the moment it was “fulfilled” on May 14, 1948. He reduces Zionism to a program with only one goal: establishing a Jewish State; therefore, he believes Zionism and its institutions are a relic of the past.

However, one does not need to look far into the past to understand that Pfeffer is projecting a definition of Zionism that many of its very founders would reject. While he is correct to recognize that “there were too many types of Zionism […] to give us any clue as to how to run a country,” he fails to concede that this was never the only stated goal of Zionism in the first place.

In short, Pfeffer is not wrong that the Zionist movement pursued a political program to create a Jewish state, but he is wrong to essentialize Zionism as only a political program. By doing so he misses two other fundamental aspects of Zionism.

First, he fails to recognize that alongside re-establishing the Jewish State, Zionism sought to re-establish the Jewish people. It was a cultural and psychosocial movement to liberate a land and a people. In his opening address to the First Zionist Congress in 1897, Theodor Herzl made this quite clear. “For Zionism is a home-coming to the Jewish fold,” Herzl explains, “even before it becomes a home-coming to the Jewish land.” He envisioned Zionism and the Zionist Congress as an instrument for “reviving […] national consciousness” and “creating an agency for the Jewish people.” Zionism is as much about empowerment as it is about politics. In fact, Dr. Nathan Birnbaum was the only speaker at the First Zionist Congress to demand Jewish sovereignty in Palestine.

Second, Zionism was always a movement that saw beyond the horizon of statehood. Generations of Zionist leaders have articulated a goal not just to create and sustain a Jewish state, but to nurture a Jewish society. Many Zionist visionaries, Herzl included, had much loftier goals for the movement than just Jewish statehood – he and others sought Jewish self-fulfillment. In this way, Zionists sought a state as a means to an end, and not only as an end in itself. The Zionist Congress – indeed, Zionism itself – was an opportunity for the Jewish people to pursue a Jewish State, but it was also a stage to have a global conversation about the Jewish future.

At the First Zionist Congress, Herzl opined his desire not to create an “international league but international discussion” as a means to “creating agency for the Jewish people.” This is why Zionism’s Founding Father ends his opening address to the First Zionist Congress by insisting, “our Congress shall live forever, not only until the redemption from age-long suffering is effected, but afterward as well.”

The Zionist Congress serves the same grandiose purposes today as it did 120 years ago. It is our people’s global forum to discuss, debate, and actualize the potential of the Jewish people and the Jewish State. I reject Pfeffer’s position that the World Zionist Congress “keeps in existence a long-outdated paradigm that the Diaspora needs to “support” Israel with its money and lobbying.” I am a proud, young American Jew who feels deeply honored to have the opportunity to run in this Congress and to bear witness to our people’s only remaining democratically-elected global forum. It serves as a reminder that we are one people, that our fate is intertwined, and that all of our voices matter. It reminds me that Zionism sought much more than a state for Jews, it sought Jewish liberation and a deeply Jewish State. It reminds me that I have agency in the debate over our people’s future. I am not the only one who feels this way, as voter turnout for this year’s election is up around 500% compared to the most recent election in 2015.

While Zionism did succeed in creating a Jewish State in our ancestral homeland, the movement to safeguard and enrich this new reality must carry on. Additionally, many of the other ideals of Zionism remain unfulfilled. We still have work to do to improve the collective condition of the Jewish people, to enhance our consciousness as a global community, and to nurture a country grounded in a Jewish and democratic ethos.

The World Zionist Congress creates a space for Jews across the globe to invest in a future which affirms the authenticity of Jewish existence in a sovereign Jewish State and in the Diaspora. This election and the ensuing Congress will convene the mainstream religious movements, political parties, Zionist organizations, and representatives from all walks of Jewish life and from around the world for this important conversation.

Rather than discourage participation, we must build on the foundations of these legacy institutions and take advantage of every opportunity we have to grapple with the challenges facing our global community.

I cannot think of anything more empowering – and more Jewish – than that.

About the Author
Zachary Schaffer is the Executive Director of a Jewish nonprofit whch is forging inclusive, courageous, and multigenerational leadership in the Jewish non-profit sector. He is also the President of Friends of Roots and a Resetting the Table facilitator. He has led workshops around the country on topics such as Zionism and Jewish Peoplehood, polarization, civil discourse, storytelling, Christian-Jewish relations, and more.
Related Topics
Related Posts
Comments