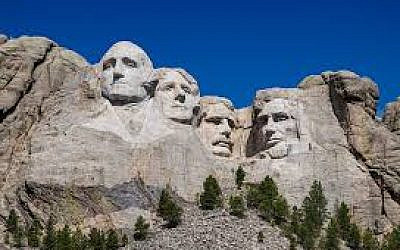 Former Soviet dissident Natan Sharansky invented the ‘3D Test’ for differentiating legitimate criticism of Israel from antisemitism. There had to be Demonization, Delegitimization and the application of Double standards.

All three are used against Israel.

All three are used against Donald Trump.

When he announced his presidential run they demonized him as some kind of monster. When he was inaugurated they marched in their tens of thousands to delegitimize him as “not my president”. And for the past three and a half years the Left have not stopped applying double standards by projecting on Trump acts of dishonesty and misconduct of which Democrats are themselves guilty in spades.

In one of his best speeches yet, President Trump stood beneath the iconic memorial to four presidents to extol the virtues of America, its achievements and its enormous potential as the land of freedom and opportunity. It was love of people and country – a call for patriotism in the face of those who trample the flag and kneel for the anthem.

The following day, virtually all the mainstream media wrote up the speech as ‘racist’.

This reminds me of the 2001 Durban conference, organized by our friends at UNESCO, which proposed that ‘Zionism equals Racism’.

Well, the folks who brought you Durban, are now saying Americanism equals Racism.

No wonder Trump is so empathetic to Israel.

They both see the world in 3D.

About the Author
Zalmi Unsdorfer is a Jewish Religious Zionist and Chairman of Likud-UK. He is a commentator on Israel as a writer, TV & panel commentator, and advocate. He supports Jewish resettlement in all of the Jewish homeland, Eretz Israel.
Comments