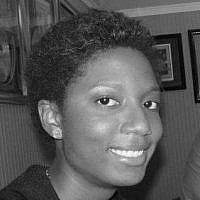 The Blogs
Chloe Valdary
Apply for a Blog
Please note that the posts on The Blogs are contributed by third parties. The opinions, facts and any media content in them are presented solely by the authors, and neither The Times of Israel nor its partners assume any responsibility for them. Please contact us in case of abuse. In case of abuse,
Report this post.

On one cool Sabbath afternoon, an elderly lady sat at lunch surrounded by many who were waiting in line to shake her hand. They wanted to tell her how much she meant to them, how much her message had touched them. When she graced the podium in Shul only a few hours earlier, she spoke of how *it* was happening again. She spoke of how Jews were coming under attack in France, Israel, Argentina, and elsewhere. She spoke of how we needed to stick together, to be strong, to hold each other up. I reflected on her words and glanced out the window of the Shul. A guard kept watch at all times during the service. A police car was parked across the street to ensure our safety.

Today, we commemorate the 70th anniversary of the liberation of Auschwitz; yet there are guards outside the places of worship where Jews congregate. Today we remember the tattooed arms, the lamp shades made out of human flesh, and the gas chambers; yet there are debates on the BBC on whether or not we should “lay the Holocaust to rest,” as though our memorialization were some science project we should have grown tired of dealing with. Today we think back to the time when Jews were forced to wear yellow badges of ignominy and we proclaim, “Never Again.”

“Never Again.” But a dozen Jews were stabbed on a bus in Tel Aviv last week.

“Never Again.” But Jews who were peacefully praying in their synagogue in Israel were butchered last year.

“Never Again.” but an 11-year-old girl was wounded in a firebomb attack last year, when a Palestinian Arab attempted to lynch her and her father.

Yet, all is not lost. Where anti-Semitism spread in the past — and still continues to do so with impunity in many areas of the world — Zionism remains the political embodiment and the true realization of the very concept of ‘Never Again.’

“Never Again,” thus did not fall on deaf ears. Every year, we should take pride in knowing that the slogan was actualized in the reestablishment of the state of Israel. It is actualized in every policy Israel takes to ensure its people are secure and self-sufficient. It is actualized by the very existence of the Israeli Defense Forces (IDF).

We were never meant to stop at commemoration; at sloganeering; at 24 hour days of dedication where we mourned the desolation and slaughter. We did not simply remember what occurred in the 1930s. We responded to it and continue to do so today. Our response to Auschwitz is unified Jerusalem. Our response to the gas chamber is the roar of the IDF fighter jet. Our response to the Dreyfus Affair is the very presence of the Israeli Knesset.

Zionism, then, is both an affirmation of and a response to “Never Again.”

This past Shabbat, I sat beside Rebbetzin Esther Jungreis — the woman who had graced the podium just a few hours before lunch;the survivor of Bergen-belsen who had just warned us of the growing anti-Semitism  and who told us to be strong. I looked at her and told her how much I appreciated her words. I will never forget that moment for as long as I live. It was the first time I had met her, but immediately, she felt like family. She stroked my face gently and said she would always be there for me.

The feeling is mutual.

The author is a consultant for the Committee for Accuracy in Middle East Reporting in America and a fellow at the Lawfare Project.

About the Author
Chloé Simone Valdary is an expert in Israel-Engagement in the millennial space. As a Tikvah Fellow at the Wall Street Journal, she developed a blueprint on the topic of Israel advocacy on campus -- namely what works, what doesn't, and how to make it better.
Comments