My story of growing up Jewish in America is probably very similar to that of many of my friends and Jews around the country.  I was blessed to have Jewish grandparents (Henry and Naomi Klein) who were more like another set of parents to me then grandparents, I attended Jewish day and sleep-away camps, I had my bar mitzvah at 13 years old and sadly,  I experienced anti-Semitism on many occasions.

My grandparents were life-long supporters, defenders, cheerleaders and fundraisers for the Jewish homeland, Israel. There were subtle and not so subtle messages as I was growing up about Zionism. Whether it was from the blue Jewish National Fund (JNF) Tzedakah boxes on their dinner table to birthday cards that were filled with certificates of Israel Bonds and trees planted in Israel through JNF or to my grandfather introducing me to the Director of the Mossad when I was a child in their Philadelphia home. (Apparently the Director of the Mossad would stay with my grandparents when he came into Philadelphia.)

My grandfather was a life-long board member of Beth Zion-Beth Israel here in Philadelphia. He was a proud Hungarian Jew and a proud Zionist. He would never compromise in his support of Israel. In his retirement years and before I was born, he volunteered in the Israel Defense Forces for 3 months in a bullet making factory. This probably wasn’t my grandmother’s idea of a vacation but for him, it was everything. It was his way of rolling up his sleeves to contribute to Israel’s future in a way that many Jewish-Americans never have or never would.

My grandmother played her role as well. She was one of the Founding Chairs of the Soviet Jewry Movement in Philadelphia and personally traveled to the U.S.S.R on multiple occasions to help refuseniks get out of the U.S.S.R and immigrate to the United States or Israel.

In early 2017, I took a meeting with a local fundraiser for JNF. We talked about my grandparents, my emotional connection to Israel and my desire to visit our homeland. One thing led to another and I was fast tracked to become a Philadelphia Board Member for JNFuture. JNFuture is the young leadership arm of JNF, creating the next generation of Jewish-American leaders.

In my role, I am tasked with donating my time and funds to JNF – to raising funds from my friends and to raising awareness. However, the single greatest thing that I’ve done in my role as a JNFuture Board Member is to show other Jewish-Americans that they shouldn’t be  afraid to speak up about their love and support for Israel.

When friends say things to me like “Bryan, I’ve always loved Israel but I’ve been afraid to publicize it. But then I see your Pro-Israel words and actions – it makes me want to join you and it inspires me to step out of the shadows.”…it melts my heart.

Since JNF’s founding in 1901, our single driving focus has been to ensure a strong, secure and prosperous Israel for the Jewish people everywhere.  And our results speak for themselves.

Together with our partners, we re-established our ancestral Jewish homeland in modern Israel. We planted more than a quarter-billion trees in what was once a barren desert. And we built hundreds of vibrant, bustling, life-affirming communities throughout Israel – including the modern metropolis of Tel Aviv. But, while we’re proud of our success, we have little interest in looking backward. Today, our passion, our commitment and our vision for the future of Israel and the Jewish people remain clear and unwavering.

And the future is very bright. Israel and the American Jewish community face both unprecedented opportunities and serious challenges in the decade ahead. To meet those challenges head-on and to leverage the opportunities before us, our strategic roadmap channels Jewish National Fund’s core values into groundbreaking new ventures.

Under the leadership of CEO Russell Robinson, JNF will be investing over $1,000,000,000 (ONE BILLION DOLLARS) into the future of Israel over the next decade. Here’s the breakdown:

Earlier this year, I was selected to join 15 young Jewish leaders from around the country to represent Philadelphia on the 2018 JNFuture Leadership Institute Mission trip to Israel. JLIM is an annual leadership development mission for 15-30 selected, proven, high-impact young Jewish leaders who are willing to commit their time, leadership, talent and resources to strengthen JNF and Israel and to be change agents in the Jewish world.

In short, the trip changed my life and took my love and commitment for Israel to the next level. Words can’t explain the feeling of growing up and living my entire life as a minority and how once you land in Israel, you’re no longer the minority. You’re the majority. It was a powerful feeling that I felt all throughout that week in July and one that I still feel today. 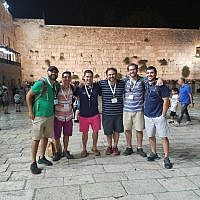 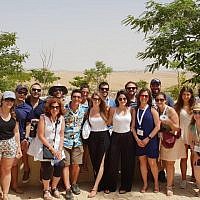 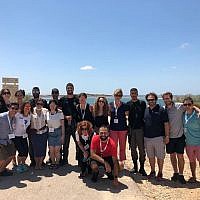 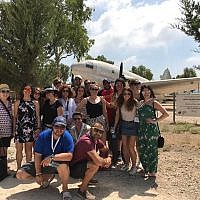 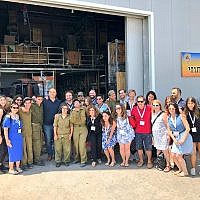 When Theodor Herzl wrote his landmark book The Jewish State, he used fiction to inspire millions of Jews around the world to take action. Today, JNF’s dreams for the future transcend fiction. With your help, our dreams will become a reality!

In closing, I owe my deep connection, love and passion for Israel & my Jewish heritage to my grandparents. My parents didn’t push Israel…that was my grandparents job/role. And they succeeded. Just as JNF has succeeded in taking Zionism from a dream to a reality.

My grandparents stood with Israel every day for most of the first 70 years (Grandpop passed away in 2010 and Grandmom in 2014). However, I pledge today and forever to carry out their life’s work and to stand with Israel for the next 70 years. The most beautiful part about me saying this is that I know I’m not alone!

Thank you to the JNF for being my voice in Israel – together, we will make sure Israel continues to grow and thrive forever. Am Yisrael Chai.

About the Author
Bryan E. Leib is a Philadelphia native, he is a Jewish Voices for Trump Coalition Member and a former U.S. Congressional Candidate in 2018 for PA-03.  He is the Chairman of HaShevet and he has served on the boards of the National Museum of American Jewish History, United Way, Jewish National Fund, Jewish Business Network and the Camden Youth Soccer Club. He tweets at @Bryan_E_Leib
Comments