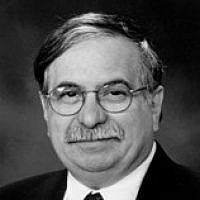 The Blogs
Lawrence J. Epstein
Apply for a Blog
Please note that the posts on The Blogs are contributed by third parties. The opinions, facts and any media content in them are presented solely by the authors, and neither The Times of Israel nor its partners assume any responsibility for them. Please contact us in case of abuse. In case of abuse,
Report this post.

Zionism’s ultimate goal is the redemption of the world through Judaism. The initial and already successful goals were to provide a new post-Enlightenment identity for Jews as members of a nation, ingather exiles from the Diaspora to Eretz Yisrael, and gain sovereignty over the land. While these goals were all successfully begun, they were not completed. Not all Jews see themselves as part of the same Jewish nation. Nor have all Jews have made aliyah. Additionally, Israel has continuing struggles to defend itself and maintain the sovereignty it worked so heroically to achieve. Perhaps it is the very incompleteness of the Zionist enterprise, the need for a continuing focus on preserving its historical gains, that masks the ultimate Zionist aspiration.

The deeper, visionary goal was that, from Israel, the Jewish people would be a light unto the nations. The ultimate Zionist goal of redeeming humanity would provide the foundational meaning to human existence and reconcile human behavior with Godly intentions.

Theodor Herzl glimpsed this goal. His emphasis was on providing a protective haven. But Herzl, struggling to find the right language, put it this way: “It is fine that we aspire to our ancient land. But what we want in that ancient land is a blossoming of the Jewish spirit.” The Jewish state, that is, was meant to revive the Jewish spirit, a spirit warped but miraculously intact, savaged but still alive, stymied in its attempt to redeem the world but still chosen to do so.

It was David Ben-Gurion who could finally give full voice to this vision: “The renaissance of Israel did not and does not consist merely of the establishment of state-national instruments for the Hebrew nation, but it will express its fullest and highest form in the revelation of its eternal spirit and the fulfillment of its historic mission in redeeming mankind.”
Martin Buber wrote that “Israel is the foundation stone and solid basis of the messianic building of humanity.”

Of course, more religiously sensitive souls than Herzl or Ben-Gurion and more traditional ones than Buber understood this as well. As Rabbi Abraham Isaac Kook put it, for example: “The hope for the Redemption is the force that sustains Judaism in the Diaspora; the Judaism of Eretz Yisrael is the very Redemption.”

But if redemption is the end goal of Zionism, what are the mechanics to achieve it? How are Jews supposed to go about redeeming the world now that the Jewish nation is restored?

There are many Rabbinic sources that indicate the Redemption (or the end of days) would be marked by the nations converting to Judaism. Judah Halevi mentions this in the Kuzari. Nahmanides notes it in his work Kitvei Ramban. Hai Gaon believed that with the Redemption all nations would embrace Judaism. A variety of early Ashkenazic sages believed in redemption by conversion. Rabbi Meir ben Shimon asserted that the beginning of redemption after the end of the exile involved the mass conversion of Gentiles.

For these and other Jewish thinkers, God would bring about this Redemption, just as, for them, it was God Who would restore the Jewish nation. On this interpretation, the Jewish mission was to serve as moral models and patiently await God’s Messiah. That is, there was a powerful tradition to remain passive, to wait for God to bring the Jews to Zion or God to convert the Gentiles.

But Zionism itself is a dynamic refutation of passivity. The movement rose precisely against the loudly-proclaimed assertion that Jews were to await the Messiah who would lead the people back to their sacred land. Zionism secularized the idea of waiting for God to bring the Jewish back. Following that tradition, Israel should secularize waiting for God to bring humanity to Judaism.

Zionism’s next step, remaining faithful to its logic of auto-emancipation, is actively to encourage the conversion of sincere Gentiles who wish to join the Jewish people on its historic spiritual journey.
All efforts to bring Gentiles into the House of Judaism need to be effected without coercion, or force, or emotional blackmail or pressure and without intruding on the privacy of others such as by stopping people in a public place or make an unsolicited call or visits to their home. Jews have themselves been subject to all of these methods and so cannot morally mirror them in trying to offer Judaism to those who freely wish to accept it.

Israel has much work to do to prepare for its redemptive efforts. First of all, there needs to be recognition of conversion’s role in the Jewish mission to be a light unto the nations. Secondly, there are practical matters of conversion to be resolved. Israeli religious and national authorities need to determine the Halachic ways, in the spirit of Hillel not Shammai, to welcome sincere converts. The virtues of such a resolution include bringing home people with Jewish ancestors, uniting religiously-divided families, and finding a gateway for those on a religious journey. It requires such a resolution for the Jewish people to fulfill our spiritual obligations.

One significant question Israelis face is whether or not they should wait until all the initial goals have been met, or at least until security is fully achieved, before embarking on the final goal. This is a significant question because it must be decided whether or not the crucial ultimate goal would interfere with or harm completing the initial goals. This is an issue worth discussing, but working toward the ultimate goal has many virtues on its side. First of all, in doing so Zionism would be fulfilling its own plans. Secondly, Israel is secure enough to proceed. Thirdly, seeking to redeem humanity can inspire Jews around the world and lead to increased aliyah. Fourthly, there is no evidence that current efforts to encourage conversion to Judaism have met hostility or resistance. For these and other reasons, it is time for Israel to move from its initial goals to its ultimate one.

There is a terrifying seriousness, an unbearable heaviness, to Israel’s divine mission. Nevertheless, welcoming converts is implicit in Zionist theory, it was prized in pre-Exilic Jewish history, and it was widely recognized as a sign of Redemption. Now that Israel is restored, it is time to focus on both continuing efforts to remain secure and to begin the staggering effort to be a light unto the nations. Israel will be the base emanating the sparks of Redemption. It will undertake the holy efforts, inevitably accompanied by some frustrations and failures, to fulfill Israel’s historic mission to the nations.

About the Author
I am the author of a variety of books about Jewish life including "The Haunted Smile: The Story of Jewish Comedians in America." My most recent book is "Converts to Judaism: Stories from Biblical Times to Today" published by Rowman & Littlefield.
Comments