The Blogs
Naftali Rothenberg
Apply for a Blog
Please note that the posts on The Blogs are contributed by third parties. The opinions, facts and any media content in them are presented solely by the authors, and neither The Times of Israel nor its partners assume any responsibility for them. Please contact us in case of abuse. In case of abuse,
Report this post. 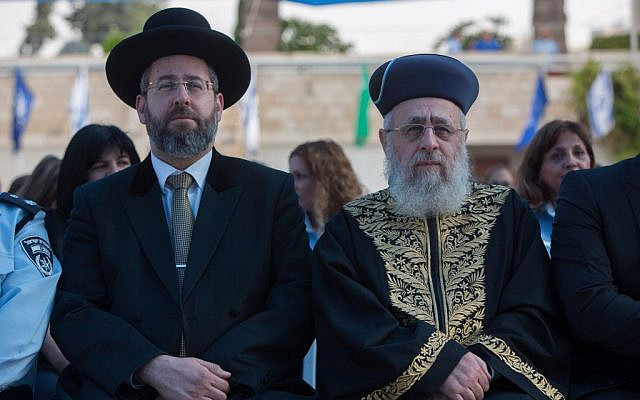 The coalition agreement between the Yamina and Yesh Atid parties spells out a goal of changing the electoral process for the chief rabbi of Israel with the purpose of electing a “Zionist chief rabbi.” The plan is based upon flawed assumptions and should be abandoned.

Elections for the chief rabbinate of Israel – and often for municipal rabbis – have for decades been an arena for political struggles over the proximity of candidates to one sector or another. The coalition achievements of the Haredi parties naturally led most of the time to a majority of their representatives in the “electoral body” and to the selection of candidates from the public who sent them and are acceptable to their rabbinical authorities.

Despite this, the selected candidates with the ultra-Orthodox background were usually experienced in the service of diverse communities, especially outside the ultra-Orthodox framework. They were accepted by the general public; were recognized at “hesder yeshivot” (which combine Torah study with army service) and in Zionist communities. They participated in national events, and continued the established halakhic line of the institution.

Although not educated in the framework of religious Zionism, these rabbis were “Zionists” in their attitude and public functions, even before they were elected to office. Contrary to the prevailing public image, a comparison between rulings of rabbis with an ultra-Orthodox background and rabbis with a Zionist-religious background does not indicate that the latter are more “open” or more lenient in halakhic rulings or more involved in the general public.

As an institution, the origins of the chief rabbinate may come as a surprise to some. The chief rabbinate is not commanded in the Torah or by the sages. Today’s chief rabbi is an elected heir to the “Chacham Bashi,” a role established under the Ottomans according to the “Millet” framework of limited self-rule by religious minorities that was later modified during British rule to add an Ashkenazi chief rabbi. The framework was adopted by Israel’s first prime minister, David Ben-Gurion, in order to maintain government control over the religious establishment. The popular claim that Rabbi Abraham Isaac Kook founded the chief rabbinate is inaccurate and, of course, ignores the Sephardic rabbis who served in the position of “Chacham Bashi” in Jerusalem as early as 1841 and were called “Rishon LeZion.”

Ultra-Orthodox communities along with many Zionist-religious communities do not accept the halakhic authority of the chief rabbis as such. They have their own rabbis. There are individual chief rabbis whose authority has been recognized by virtue of their personalities and not because of being appointed to such a role. Any rabbi, if elected, would be accepted, if at all, by a very small segment of Israeli society, a few individual communities.

The general public understands that a “Zionist rabbi” is not necessarily more committed to the Jewish people than are Sephardic or Ashkenazi rabbis who were not members of the Zionist religious parties and did not send their children to the Zionist Bnei Akiva youth group, but were very committed to the general public in Israel. An attempt to create the illusion that the halakhah of “Zionist rabbis” is more “considerate” and more “open” towards women, the secular, agunot or foreigners has no basis in reality.

Who is a Zionist?

And then there’s the question of how the distinction between “Zionist Rabbi” and “non-Zionist” will be made.

Some stereotyping is all we have, and that’s not reliable. For example, is someone who studied in a Lithuanian yeshiva “Zionist”? What if that same person served in the IDF? Now is he considered “Zionist”? What about someone who studied at the official yeshiva of Rabbi Avraham Yitzhak Kook? That sounds pretty Zionistic. But what if that same person did not serve in Israel’s army and had rarely encountered a secular Jew ever? What about a rabbi who studied at a hesder yeshiva, served in the IDF, and then went on to seclude himself in a Lithuanian yeshiva, continued to study, and eventually qualified to serve as a dayan, a religious court judge? Is he a Zionist?

As complicated as these resumes may be to define, there is another set of considerations that challenges the definition of “Zionist” in other ways. For example, what about one who incites against minorities in Israel? Or one who told IDF soldiers to refuse orders? Is defying the Israeli army Zionist? What about one who encourages Jews to ascend the Temple Mount, when, historically, most rabbinic decisors have rejected this practice? Who is the Zionist here?

The call to appoint a “Zionist rabbi” opens a dangerous campaign of de-legitimization and incitement. And not only against rabbis. Is it not enough for a person to be a law-abiding citizen in a democratic nation-state to qualify for a public service job? Will we start rummaging through the Zionism credentials, as it were, of every educator, government official, IDF officer? Will we publish metrics for the “Zionism” of the candidate?

And let’s not exaggerate a chief rabbi’s ability to bring about a comprehensive revolution in religious services for Jewish citizens. A chief rabbi’s influence depends on his relationship with his colleagues, his ability to create a delicate balance, lead agreements, get backing and finally influence also thanks to his personal prestige. These decisions are far from the day-to-day service to citizens provided by an independent local rabbinate. The local rabbinate is not “run” by the chief rabbinate. The administrative impact of the Ministry of Religious Affairs is more significant.

Those who engage in serving the public and who enjoy public trust are worthy of our respect. The rabbis who serve the general public in cities, towns and neighborhoods are fortunate to have the opportunity to offer love and assistance, to help, to strengthen, to teach and learn. In contrast to the prevailing images, I believe Israel’s rabbinate generally succeeds in fulfilling its tasks. The power struggles we are witnessing around the chief rabbinate election upset this balance. There is no call for personal disqualification and woe to those who fail in it. Delegitimization of sectors and communities is a blatant distortion. Even in politics, that which is not done for the Holy One’s sake – for kiddush HaShem — must be avoided.