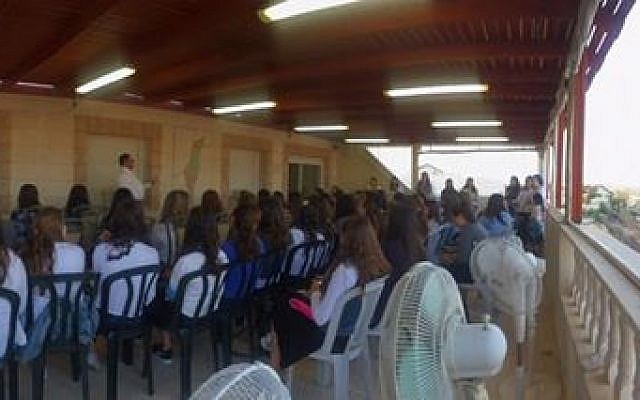 As an Israel educator for almost 15 years, I have taught high school and college students Israeli history, Israeli current events and how to advocate for a strong U.S.-Israel relationship. I take students out of the classroom to see the issues on the ground in Israel, to the Hill and the White House to lobby elected officials in Congress and members of the administration. During that time I’ve developed a set of 10 principles that I use to guide my Israel teaching.

1. Don’t be embarrassed to mention God, but know when and where to discuss Him.
If not for God giving us the Land of Israel, it wouldn’t have any significance to us. God protects the land and it is only through God’s providence that the Jewish people remain safe in Israel. It is important to keep in mind that not everyone is ready to hear about God and sometimes mentioning God causes more harm than benefit. Sometimes the best messages about God and Torah are taught implicitly through action and not explicitly through words.

2. America is where we live, but Israel is home.
America has been wonderful for Jews. There’s been no country that has been as generous to the Jews as The United States. Jews are welcome guests in America, but eventually all guests overstay their welcome. Israel is the Jewish people’s homeland.Not every Jew might be able to move home today, but every Jew should strive to move home at some point. No matter how far a Jew strays from home, Jews have a vested interest in ensuring their home is safe and successful. If Jews abandon their home they abandon a part of their past, their future and their national identity.

3. Israel is a Jewish state, and being Jewish is consistent with being Democratic.
The land of Israel was always meant to be for the Jewish people. Israel is the historic homeland of the Jewish people and the Jews never gave up hope of returning to it. The Jewish state is open for all Jews to return to it. It is not discriminatory for an immigration policy to allow all Jews to return to their homeland and not keep the doors wide open to all others. A Jewish state doesn’t discriminate against Gentiles. The Ger Toshav has always had a place in our land. There are no rights awarded to Jewish citizens in Israel that non-Jewish Israeli citizens can’t enjoy.

4. There’s a difference between education, which is the history of Israel, and advocacy, which is the movement to accomplish.
It is important for Jews to know Jewish history, the history of Zionism, and the different personalities and opinions that shaped modern day Israel. It is also important to teach Jewish students that they have a responsibility to help their fellow Jews. They must effectuate positive change and their teachers must teach them how. Advocacy doesn’t mean being a cheerleader; it isn’t talking into the echo chamber of people who agree with you. Advocacy requires taking action that makes life better for Israelis in Israel.

5. We don’t criticize or prescribe action to Israel, but we’re not hesitant to discuss where Israel can improve.
Don’t judge someone until you’re in their shoes and give everyone the benefit of the doubt are two important lessons from Pirkie Avot – Chapters of the Fathers. These lessons direct how we are to judge others. It is easy to second guess when not facing the pressure of living with the consequences of their advice. Just because a person might be correct doesn’t mean it should be said. Israel advocates can admit and discuss areas Israel needs to improve, but they should do so in a supportive manner.

6. If we don’t know the Arab perspective, we can’t teach our students how to answer the false narrative or to dialogue with Arabs.
Israel has every right to exist, rule over all of its land, and dictate policy and law to those who live within its borders. That doesn’t mean there isn’t a different viewpoint than Israel’s. Many aspects of the Arab perspective are false and the only way to know how to answer the lies is to be familiar with them. Jews are commanded to be rodef shalom (pursuers of peace). While many aspects of the Arab narrative are false, they still represent how Arabs feel and in order to make peace with the Arabs we must empathize with their feelings.

7. We must know the Arab perspective, but we don’t have to answer it.
Pirkie Avot – Chapters of the Fathers instructs to know what to answer. Our scholars have commented on this teaching that we are instructed to know what to answer but not that we must actually answer. There are times that a Jew cannot stay quiet. Decency demands that we object and point out the truth, but that’s only where our words will be effective. There are times where we’d like to object, to point out the truth, but our audience is too biased to listen. At those times it is best to stay quiet.

8. Bipartisan support for Israel is necessary, but it doesn’t mean you can’t be a Republican or Democrat.
Democrats and Republicans often switch from the majority to the minority. If Israel only has support of one party, when that party is out of power Israel loses. It is important that we never call out a party as anti-Israel but explain our concerns and express where we need it to improve. There are values that both Republicans and Democrats share with the State of Israel, both can find a home in supporting Israel. Just because we strive for bipartisan support of Israel doesn’t mean an Israel advocate can’t be liberal or conservative themselves.

9. Iran, Hamas, Hezbollah are our enemies; those that disagree with us are our opponents.
Iran, Hamas and Hezbollah want to annihilate Israel. This would mean the destruction of our autonomy and the death of millions of Jews. This is what defines an enemy. Organizations that advocate a position we disagree with and even find dangerous to Israel’s future are not enemies, they are opponents. We kill the enemy, we treat our opponents with respect. When we confuse enemies and opponents, enemies thrive and opponents needlessly die. In the mid 1990’s we confused the two, and while Hamas succeeded in blowing up buses, Prime Minister Rabin was assassinated.

10. Israel makes mistakes, but its policies are just, moral and legal.
Irrespective of what Israel’s opponents and some of it friends say, Israel’s control of Judea and Samaria, its immigration policies, how it treats Palestinian Arabs, and how it conducts war is just, moral and legal. At times Israel does wrong, but it corrects its mistakes and punishes its abusers. It does not celebrate them. Above all, this is what makes Israel a liberal Democracy.