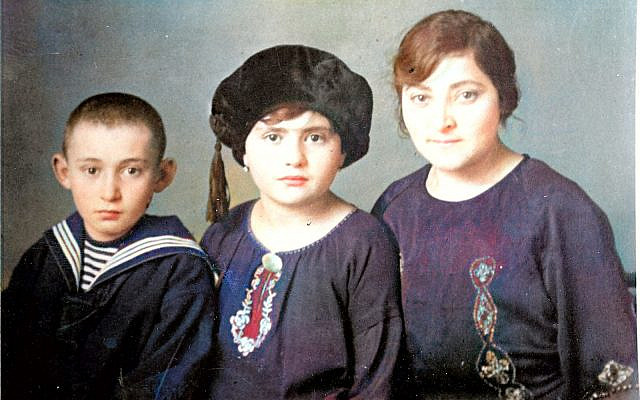 Dinner between cousins was scheduled for Shabbat on Friday, May 14, 1915. How was I to know that the Shabbos meal never took place? Without warning, Russian forces launched a genocidal mass deportation of Baltic Jews into the depths of Russia. Families were torn apart, lives were destroyed, and communities of Jews devastated.

The first inkling I had was on my grandmother’s deathbed. Her final lucid words to me were: “I wish I knew my name. I wish I knew who my family was.” We thought we knew her name – Bertha Lee Arenson. We were wrong.

My grandmother had been adopted. She had a genetic brother and maternal cousins. I knew her youth had been traumatic; nothing more. A deathbed plea for her own identity from a beloved grandmother is nothing from which a grandson can turn away. The search for my Grandmothers identity became my life’s mission. It was the only act I could still perform on her behalf. There were clues to her real identity, but in a pre-internet age, they were not viable. 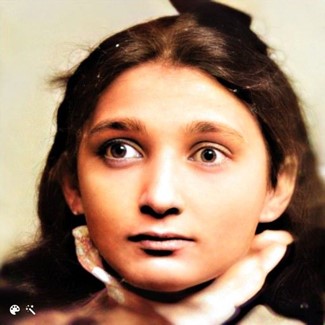 My grandmother had not known her country of birth. At times, she had claimed she was born in Latvia, Lithuania, Poland and even Russia. I hired six different researchers in five different countries. Her date of birth had been randomly imposed upon her, yet she remembered her mother’s first name had been Sirella, her father Jankel, and their last name approximated Novosedz. Novosedz just means “new settler” in Russian – it was not a hint of any value. I had little with which to work. 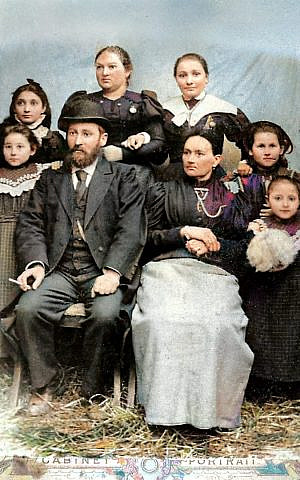 The discovery of my Grandmother’s identity was accidental, a series of random searches where the puzzle pieces fit. Sirella was the diminutive of Sire Elke. Jankel was the abbreviation of Iankel Ber. Novosedz was Lithuanian. Bertha Lee was actually Brocha Leya. Her fictional date of birth, December 7, 1912 was actually July 10, 1911. My grandmother was Brocha Leya Novosedz, born in Birzai Lithuania, to Sire Elke Garrenbloom and Iankel Ber Novosedz. The Garrenblooms and Novosedz families were both well-established, prosperous families, living in Lithuania for hundreds of years. It was a good marriage!

Iankel, my great-grandfather, worked for Baron Von Fredrichshof on the Fredrichshof estate in Riga. Sirella’s family, the Garrenblooms, were a prosperous family in Raguva Lithuania. The children were well cared for, education was primary. 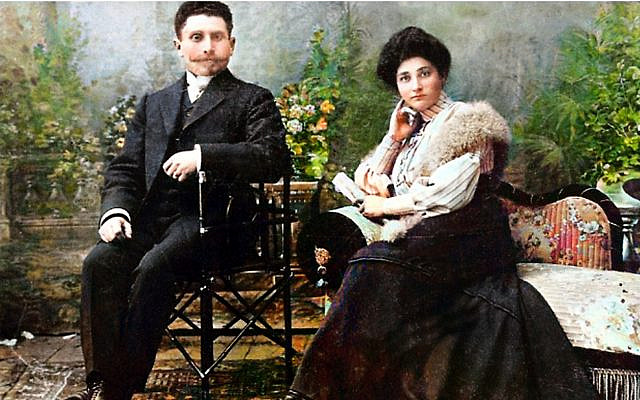 Jankel, Sirella and all of their relatives were deported into Ukraine in a mass deportation of Jews from Lithuania and Latvia on Saturday, May 15, 1915. The Russian instigated deportations were sudden, they were brutal. Immediately, and sometimes even before the Jews were forcibly removed from their homes, Lithuanians plundered their possessions. Ordinary, people’s lives were utterly destroyed simply because they were Jews.

From being a wealthy successful family, they were placed on cattle cars and transported into the Russian hinterlands without food or means of survival. My grandmother was four years old. Her younger brother Moshe was two. Criminals indeed! The Shabbat dinner obviously never happened.

In Ukraine, Sirella, her sister Sonia, and their mother Esther sold candy at the roadside trying to eke out pennies to survive. Sonia (mother of the South African national hero Esther Barsel) swept the cemetery, begging for crumbs.

These were the times of massive pogroms in Ukraine. Jews were forbidden from trading in grain. They were not allowed to possess food, they were not allowed to trade food, they were not supposed to remain alive. Jankel was thrown into prison for his crime of trying to feed his family. He was beaten and starved. He contracted typhoid in prison from the torturous and filthy conditions in which he and other Jews were held. On the very morning of his death, prison guards threw his almost lifeless body outside of the prison so they would not have to deal with yet one more dead Jew. He died that same day. 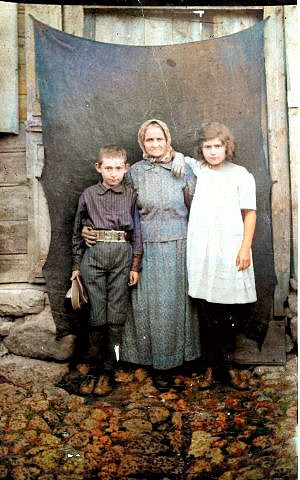 Esther Garrenbloom with her grandson Moshe (Morris) and granddaughter Brocha. (Photo taken in Ukraine in about 1919. Source: Personal archive)

Pogroms against Jews in Ukraine were considered a “national good”. They were planned with the approval of local authorities. Often Jews would know their intended date of murder and rape. They were helpless against the hordes and officials that sought their eradication.

Sirella died of deprivation and illness while Jankel was imprisoned. Brocha and Moshe were made orphans, fending for themselves, living with their Aunt Sonia and their grandmother Esther. They were exhausted, starved, and persecuted. How could children understand that they were made orphans just because they were born Jewish?

Sonia and Esther took the children and relocated to Kharkov where Sonia met and married a Ukrainian Jew, Joseph Levin.

Stalin and Lenin imposed their first Holodomor on Ukraine in 1922. There was no intention that disposed Jews should survive. Sonia and the children somehow made their way back to Lithuania in the hopes of survival. There is no trace of Esther.

Officials in the newly independent Lithuania cared just as much for Jewish wellbeing as Stalin. The newly created Lithuanian government tried to prevent the return of Jews. Nonetheless, Sonia and her wards reached Raguva to live in the old Garrenbloom home.

Sirella’s siblings Sarah, John and Abraham had previously emigrated to South Africa. Sonia reached out to Sarah. She told her that she could no longer care for their sister’s children, and to send rescue.

Sarah’s husband, Abraham Arenson was dispatched to Lithuania to collect the children. This was simultaneous with the Ochberg Orphan rescues (the rescue of Jewish orphans from the Ukrainian pogroms who would otherwise have starved to death).

When the Novosedz family was deported in 1915, a Lithuanian friend entered their home in Birzai and removed Esther’s gold watch (see in the picture above and below), and some silver serving pieces. They held these few remnants in safekeeping on the slim hopes the Novosedz family would survive.

Abraham brought the children to the safe haven of South Africa. Abraham and Sarah transformed my grandmother, Brocha Leya Novosedz, into Bertha (Bee) Lee Arenson. Her relationship to the Garrenbloom family remained. The Garrenblooms knew nothing of Sirella’s husband’s family, Novosedz. That connection was destroyed. The Arenson family was poor. At age 14, Brocha was removed from school and sent out to work. Russians and Lithuanians had ensured her life opportunities were taken from her.

Brocha and her brother Moshe’s memories were so horrific that they psychologically blocked them out. Their adoptive parents tried to protect them by reinventing their identity. All memories of Lithuania and Lithuanians were so traumatizing, that Sarah and Abraham forbade Lithuania from ever being mentioned in the home (PTSD was unknown at that time). It was only on my grandmother’s deathbed that she referred to her past for the first time. When she expressed her terminal losses, I was simply unable to not try to discover her identity.

For decades I searched for clues. The Garrenblooms had been from Raguva, the cemetery in Raguva Lithuania should have offered clues. After WWII, Lithuanians dug up the cemetery in Raguva looking for gold fillings on “rich Jewish skeletons”. They stole the Jewish gravestones for use as building materials. Thus, there were no clues coming from the dead. 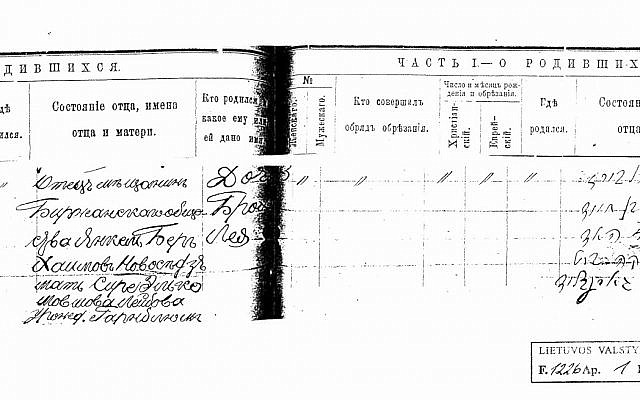 It was an accidental search that found my grandmother’s birth record and began to unravel the mystery of her descent. The Novosedz family was a storied family from Birzai, Lithuania with a traceable history back to the 1700s. Even before the arrival of Nazis into Birzai, Lithuanians chopped off the heads of rabbis and displayed them in storefronts for the entertainment of the local population. Lithuanians raped Jewish girls, and murdered Jewish families, leaving only scraps for Nazis to finish off. Lithuanians ended the known survival of the Lithuanian Novosedz family.

Upon her death, my grandmother entrusted to me with her grandmother Esther’s gold chain and watch. She gave me the napkin rings and cutlery taken from her childhood family home in Birzai. 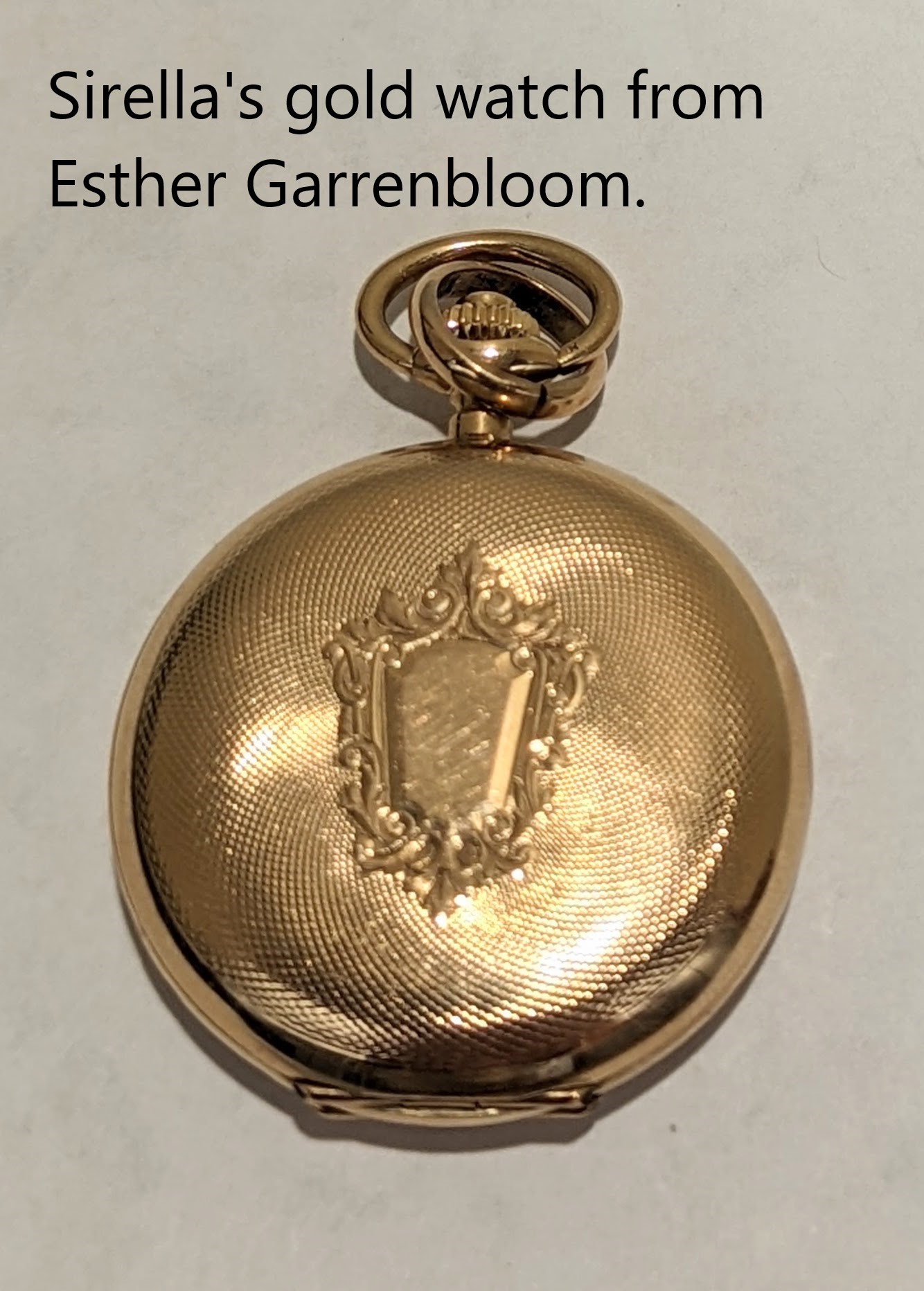 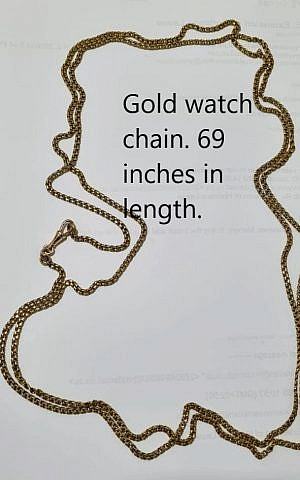 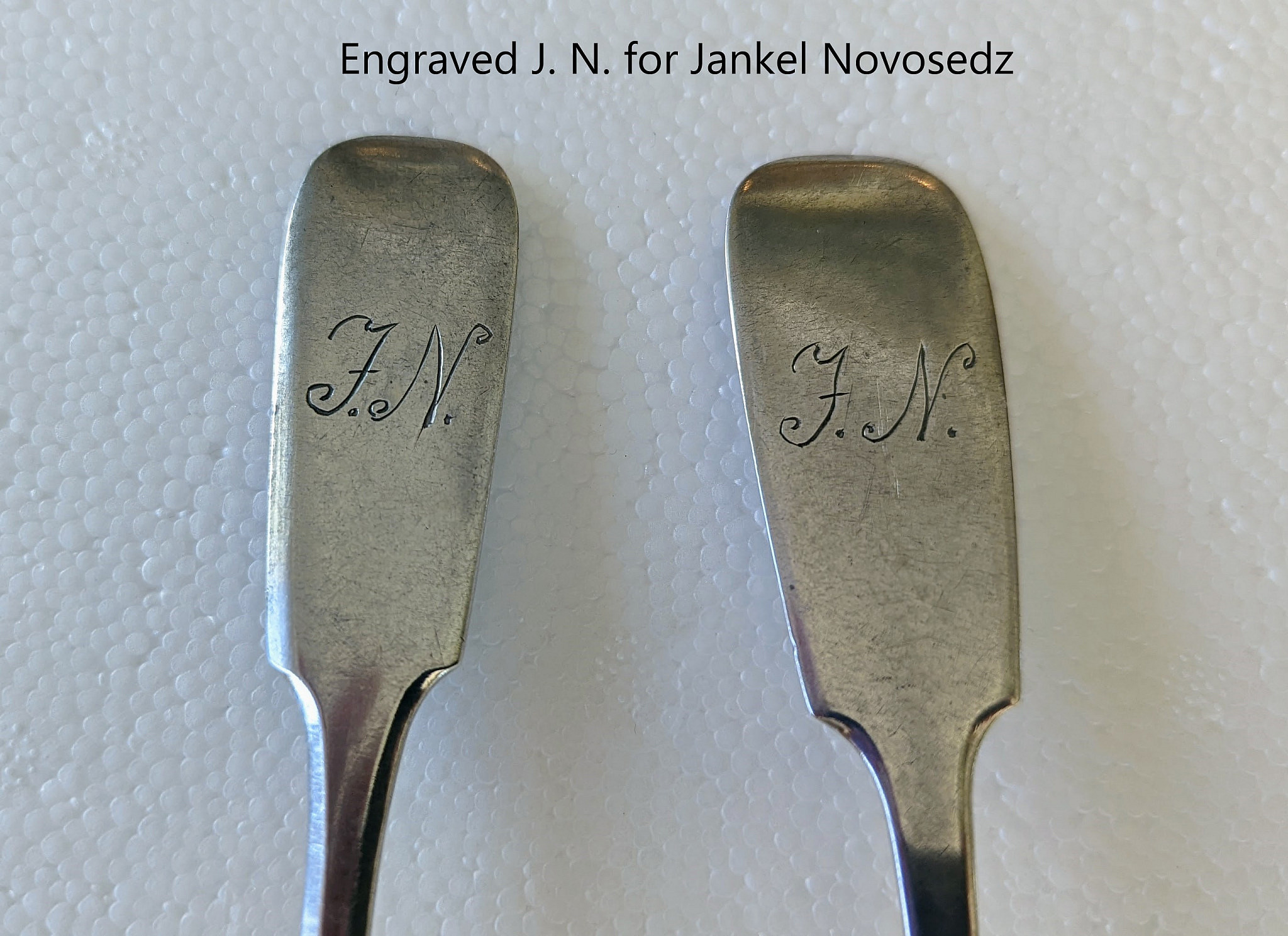 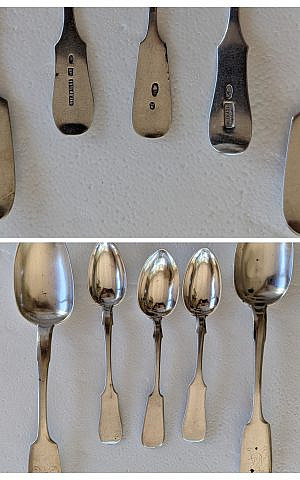 The items say ‘Вильна,’ which is ‘Vilnius’ (or Wilna, Vilna, Vilno, and so on. It was spelled differently depending on who held the control there). One of them also has word “М. Гольдт” which is the name of manufacturer, and there is ‘МГ’ on others, which likely stands for the same ‘M. Gold.’ The number ’84’ is the old system of silver purity mark, which is equal to the more contemporary 875 purity – i.e., 87.5% of content is pure silver. (Thanks to Grisha Alpernas). 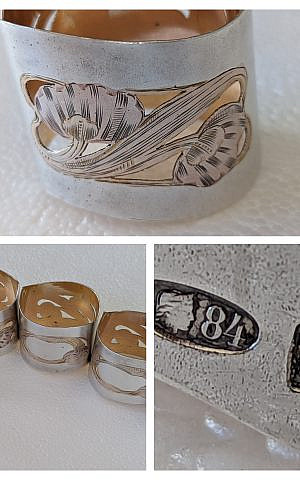 ’84’ is the silver purity code. They also seem to have letters ‘БРЗ’ or the two first letters and number 3. It is most likely the personal stamp of the manufacturer or expert who was asserting the purity of the material. (Thanks to Grisha Alpernas).

On July 8, 2022, Daniel Singer and I will meet in person. Two Novosedz cousins breaking bread on Shabbat, one hundred and seven years, and seven weeks late for dinner. We will eat using the cutlery last used by the Novosedz family in Birzai in 1915. The table décor will include the Novosedz napkin rings. The candles will be in the candelabra given to Brocha as a wedding gift by Sirella’s sister, Sarah.

Despite the annihilationist efforts of Lithuanians, Nazis and Russians to eliminate all Jews, two remnants of the Novosedz family remain alive to represent our Jewish people. Today, Lithuania celebrates the murderers of our Jewish families as their national heroes. A simple dinner between myself and Daniel proves they did not have a total victory. 3.4% of us survived and have gone on to bring incredible benefit to the world. 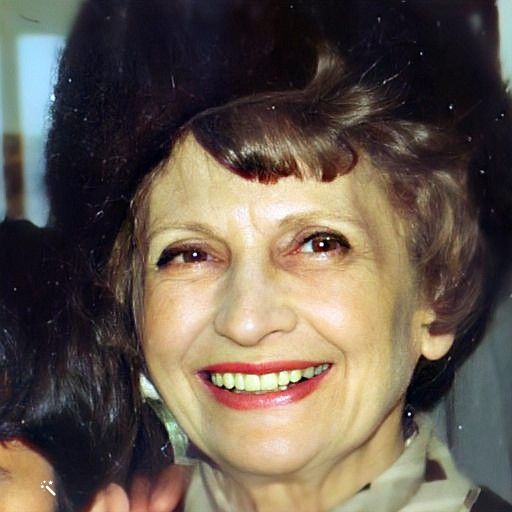 My grandmother has her name back. Her family is now known. I have given her back some of what was so brutally taken from her. Dinner is ready. There is life and joy and family at our Shabbat table. They tried to murder all of us. Lithuanians and Nazis did not win. Let the Shabbat dinner begin.