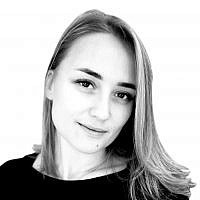 The Blogs
Sophia Tupolev-Luz
Founded The Reboot, welcoming displaced professionals to Israeli Tech
Apply for a Blog
Advertisement
Please note that the posts on The Blogs are contributed by third parties. The opinions, facts and any media content in them are presented solely by the authors, and neither The Times of Israel nor its partners assume any responsibility for them. Please contact us in case of abuse. In case of abuse,
Report this post. 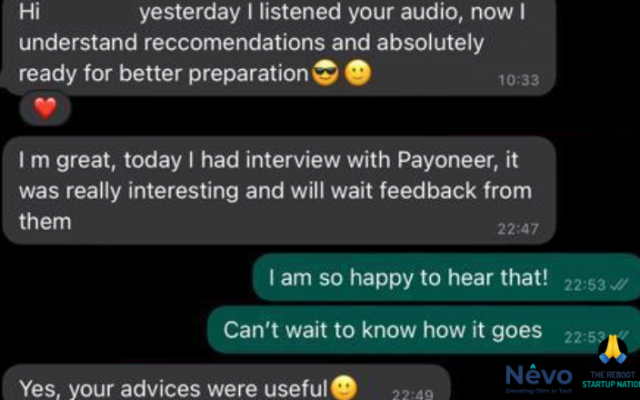 A Nevo Reboot Mentor's follow up with a new immigrant after participating in the program. (courtesy)

Since February 2022, The Reboot volunteer movement has been sharing the heart-wrenching stories of displaced professionals who fled to Israel this year, impacted by the Ukraine war and political oppression in Russia and Belarus. I would like to share my own immigration story and invite every local professional to join us to do one small thing for a newcomer – that will make a big difference in their trajectory. Can you guess what it is?

The crisp notes of Bach waft through the soundtrack of my childhood memories, mixed with my immigrant mother’s voice, muttering something about antisemitic policies, nightmarish Soviet dentists, and shortages of anesthesia. In the Boston area, my afternoons were spent picking books at the public library or seated pin-straight at the piano, wrists down.

My parents had left Russia behind in 1990, in a previous cycle of destruction. I was a baby and my mom was 24. Her Soviet demeanor was so embarrassing to me, an American teenager living every cliché of a Soviet Jewish upbringing. Her abrupt way of relating was nothing like my friends’ moms, who’d greet their daughters with “Hi Honey!” blow-dried hair, and wide grins when they picked us up from the mall. Mine, on the other hand, was not as effusive when she drove me home from my friends’ houses where I’d seek the refuge of TV and the junk food in their pantries. 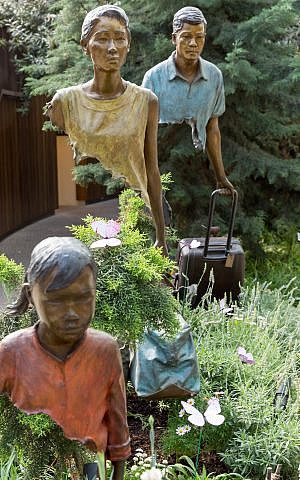 Between the two, there is often a painful transformation across a dark chasm from emigré, the one that leaves their homeland, to an immigrant, the one that starts over in a new country.

That’s why the effects of emigration, whether by choice or by force, can ripple through generations. I was an adult by the time I realized my mother had simply been in a perpetual state of mourning what she’d left behind in the old country.

The sculptor, Bruno Catalano, captured that feeling in Marseilles, France, with his ‘The Travelers’, a series of ten metallic human figures clutching bags, with gaping negative space where their torsos should be. To me, the artist seems to be saying, “No matter how far you travel, whether by choice or by force…you’ll always have that hole in your heart, that longing for who and what you left behind.”

In our networked society, we have the tools and technology to connect newcomers to locals, and to transform outsiders into insiders faster than ever. I live in Israel now, and here, our foundational values are about ‘welcoming the stranger.’

But no matter how far-flung we end up from home, it is also each immigrant’s responsibility to shed the inner shadow of our emigré and get local. Fast.

I wish I had known it at 19, when I moved back to Russia, and again in 2015, when Israel became my third immigration. In Tel Aviv, thanks to a friend who made a phone call, I found myself in my first high-tech job, in B2B technology, first as a startup employee and later, as a communications consultant with a company of my own. But working in English, I didn’t have to admit that my Hebrew was only sufficient for small talk. 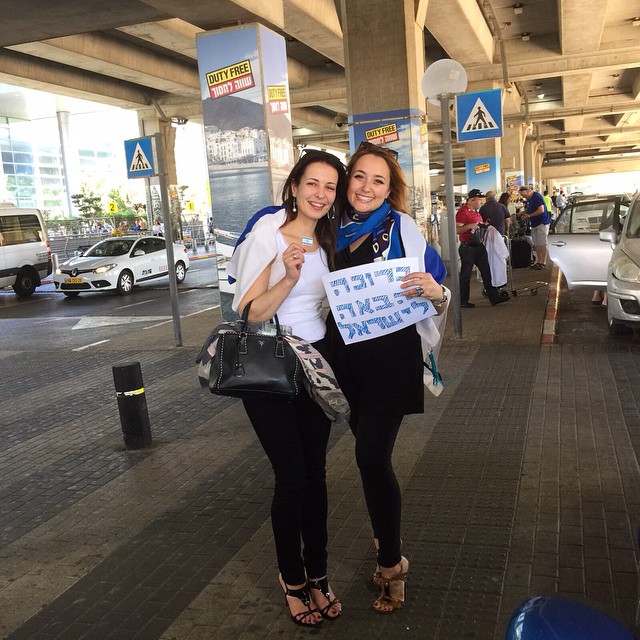 Oceans away from the refuge of childhood friends’ houses, my work became my refuge. I mostly socialized with other immigrants and often said that I wished I could have transplanted my friends to Tel Aviv with me. As they say, be careful what you wish for. In the last weeks of February of this year, my friends from Kiev, Minsk, and Moscow started calling me, panicked, flooding into Israel overnight. Many had no way back home.

Since the start of the Ukraine war, 50,000 people have moved here from the post-Soviet space.

My local friends and I formed a volunteer group that connected displaced professionals to tech companies, calling ourselves The Reboot Startup Nation. Eight months have gone by, our community numbers 12,000, and in our surveys, one thousand of them reported getting new jobs in the Israeli tech ecosystem, recently.  Does that sound like a lot? It’s actually not a lot, at all. There is much work to be done.

And you can help. I am asking every local professional in Israel to be someone’s first call. 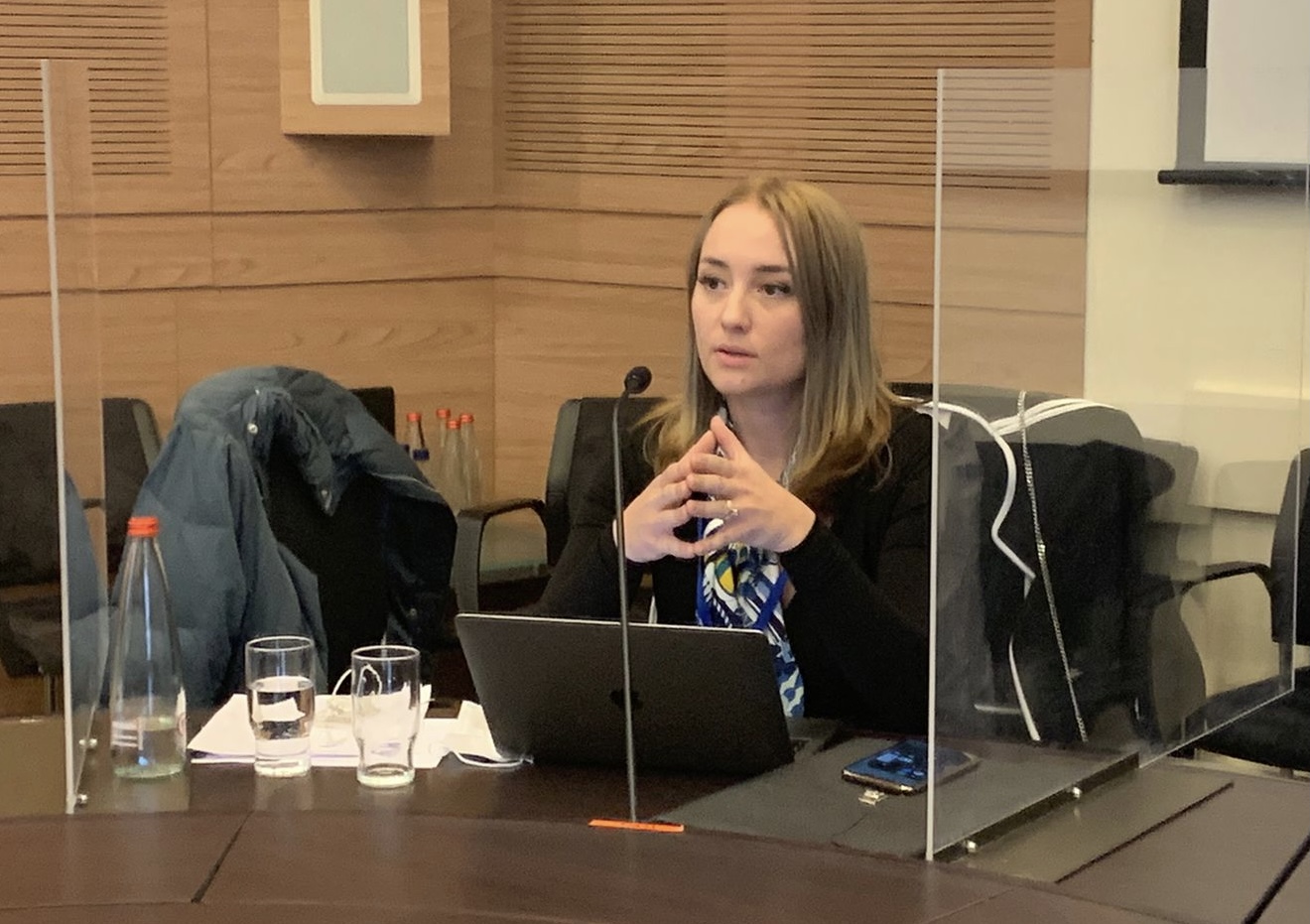 If you moved to a new country tomorrow, who would be your first call? Because when you’re rebooting your professional life in a new country, step one is figuring out WHO you need to know. That’s why, four months ago, The Reboot Startup Nation and Nevo Network launched a free mentoring program connecting local, experienced professionals with displaced professionals and immigrants.

So far, 212 local professionals have raised their hand to be that first call. According to Sabry Roisman, one of the first volunteer mentors in the program who is an immigrant, an entrepreneur, and a product manager at Selina,

My main goal is for them not to be alone in this process, and if I can make a difference and help them build their confidence, for me, I’ve met my goal.

Our local professional community has had hundreds of short introductory calls with newcomers. There’s a tech CEO offering advice on,

Getting a job in Product, Marketing, and Data.

Then there’s a director at a fintech unicorn who signed up to share,

and an investor with,

“Introductions to local VC’s and late-stage startups for job opportunities.

Just think about the ripple effect of this simple act of camaraderie.

Through our networks, and through technology, we will transform the outsider into the insider.  In a quick intro call, we have the opportunity to change the trajectory of someone’s career and the futures of their families in the new country. Because in our country, we share our future with the displaced professional, the immigrant, the refugee, the outsider, the stranger, and even the traveler. Join us as a volunteer mentor by signing up at this link. Be their first call.

About the Author
Sophia Tupolev-Luz is the founder of The Reboot Startup Nation, a non-profit, grassroots initiative rallying Israel's tech sector to welcome displaced professionals affected by the war in Ukraine.
Related Topics
Related Posts