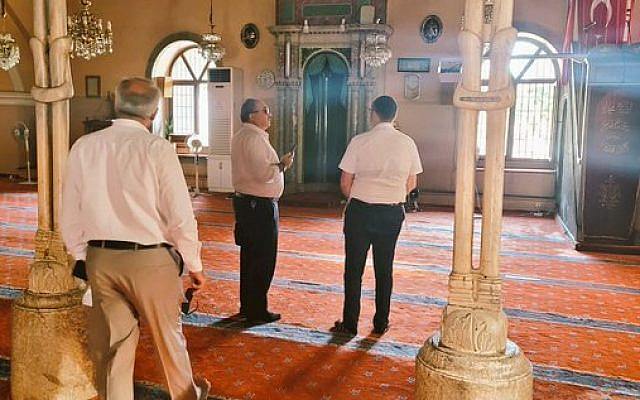 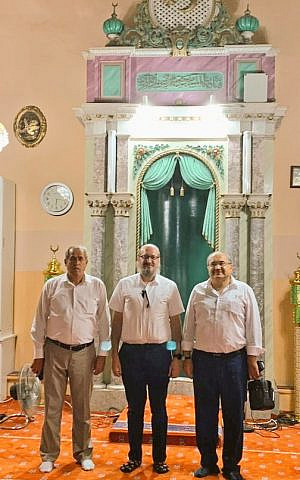 2 Imams and 1 Rabbi. And a lot of common ground.

“When you go to Manisa, Imam Osman looks forward to see you.” – Selim Öztürk

The Cultural Attaché at the Turkish Embassy in Tel Aviv – a student of Imam Osman of the Ulu Cami in Akhisar. “He will help you find Jewish traces.” And so it was. 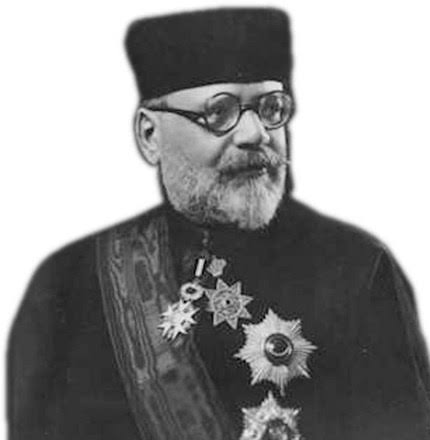 We started moving around in Manisa, once home of a vibrant Jewish community. The last Hahambashi of the Ottoman Empire, Rav Haim Nahum, was born here. He had a colorful character who resigned from the rabbinate just to later be appointed as the Chief Rabbinate of Egypt until his death in 1960. 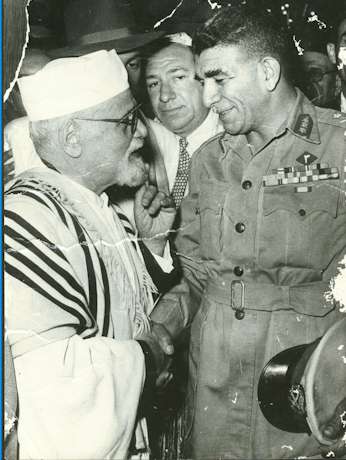 Haim Nahum has a one-of-a-kind character, whose counterparts had varying views on his capabilities as a rabbi or his religious convictions and practices. Though being a professor of Arabic and working with Nasser didn’t help much of his rabbinical standings.

But there was no trace of Haim Nahum left in Manisa…

The Archeological Museum was closed for renovation.  When it was still open to the public, it hosted many artifacts from Sardis (which we will visit soon). There were no traces of other great scholars that lived in Manisa as well but Moris Aşkenazi, left his mark.

This Manisa born American cigarette producer was cured by a Doctor here in his childhood – well just read about him here.  He left a huge mark in this city – a city hospital that treats kids! Charity is apparently much greater than scholarship.

Unfortunately, we were lost while finding the Manisa synagogue and the good Imam was driving back and forth until we found the Jewish cemetery of Manisa! The last burial was held back in the 1950’s and the Manisa Municipality takes care of cleaning the area up until today. 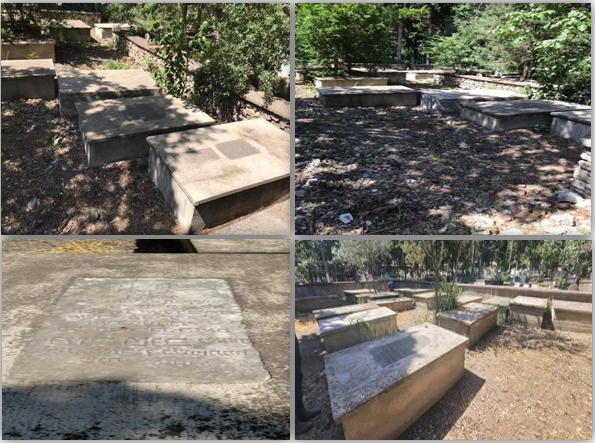 Chaim, Eliezer and I said some prayers for the souls of the Manisa Jews. We also mentioned Haim Nahum Efendi in our prayers. How can you be in Manisa and not mention him?! But not only him – all the other great rabbis and scholars, as well.

Then off we went to Turgutlu. I never knew that there was a sizable Jewish community there, until Mehmet Gokyayla, who directs the Turgutlu Kent Museum shared it with us as we sat in the garden drinking Turkish tea under a 41° temperature. 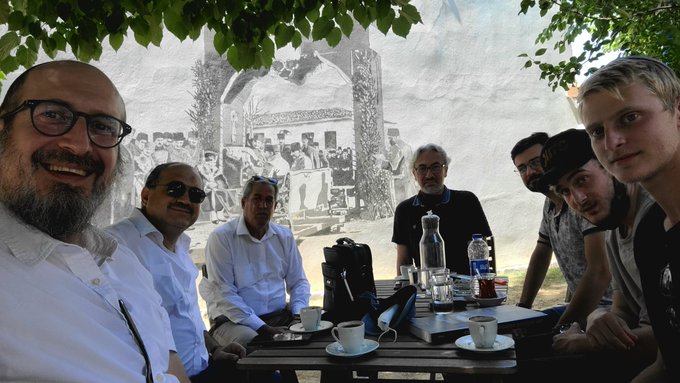 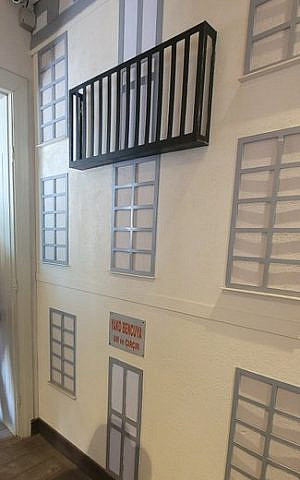 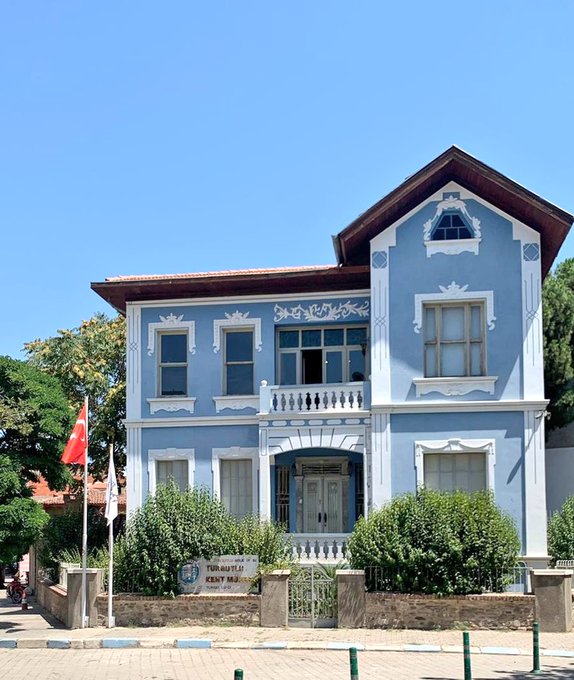 Imam Osman told me how the Turgutlu Kent Museum with its display of diversity and inclusiveness is a real example of the attitude people in this region have towards Jews and other minorities. Chaim and Eliezer and myself were walking with our Kipa and Tzitzit felt totally welcomed.

The Turgutlu Synagogue is just 150 meters away. While it is still standing and recognizable, it is not in good shape anymore. It was built in 1930, after the fire, in which the two more ancient synagogues were destroyed.

Chaim, who is much taller than me, was able to get a few pictures of the Arc (Aron Kodesh) through the window. 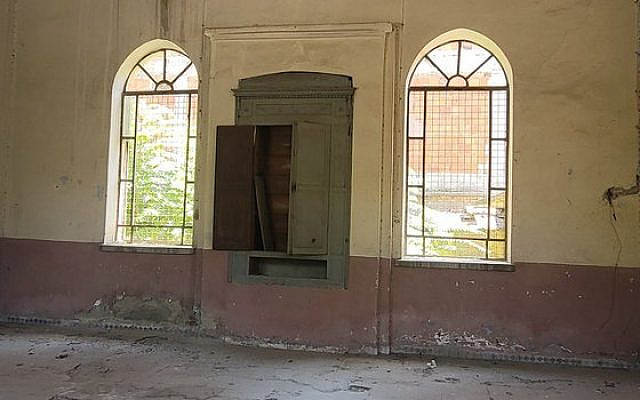 Walking back to the car in the scorching heat, my new friends Imam Osman and Imam Yaşar, suggested that we have another tea before we move on. This turned into a town hall discussion with the Director of Education, a school principal, local historians, all Yahudi Mahalle çocukları (Children born in the Jewish neighborhood). 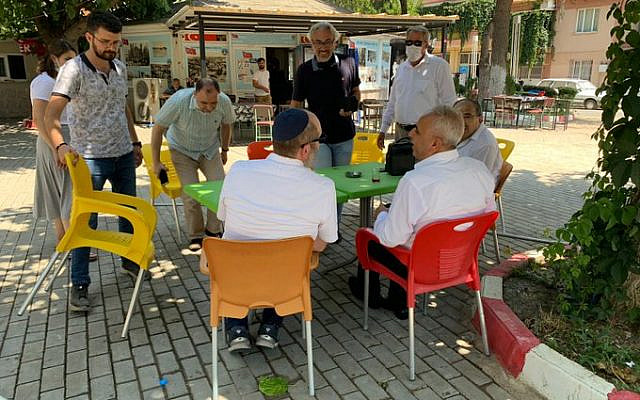 “My father would light the candles in Jewish houses on Saturdays” said Mehmet Olmez. “My father did too! They used to get 5 kuruş for it!” said another. “The second floor of my home was used as a Midraş, until the synagogue was built” and “Bencoya was known for charity”. 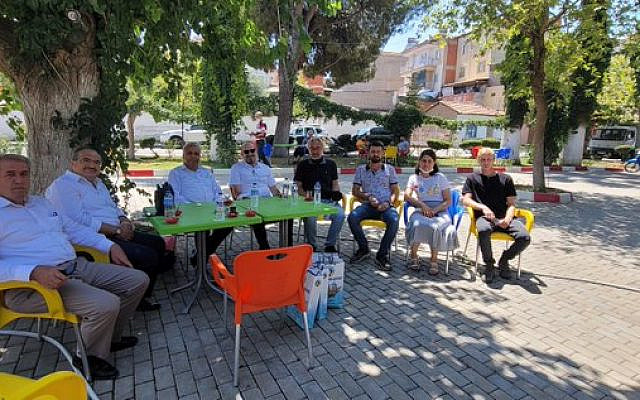 After about 5 cups of hot tea it is time to move on. Our destination? Sardis. The oldest Jewish settlement in Anatolia – one that dates to 700 BCE! 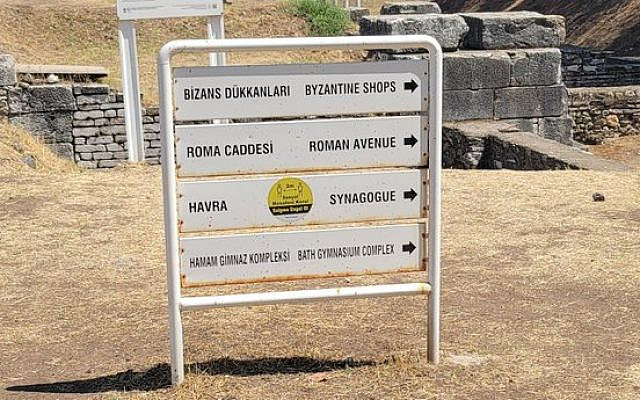 Before the destruction of the first Temple of Jerusalem, Sanherib has exiled thousands of Jews from Lahish – and the Prophet Obadia told us about the “Diaspora of Jerusalem that is in Sfarad” – the ancient name of S[f]ardis!

I love seeing Sardis Synagogue. But visiting this time with Imam Osman and Imam Yaşar gave it a whole different perspective. Having Teoman as a guide also gave us more information. Teoman has been digging here since 1960! 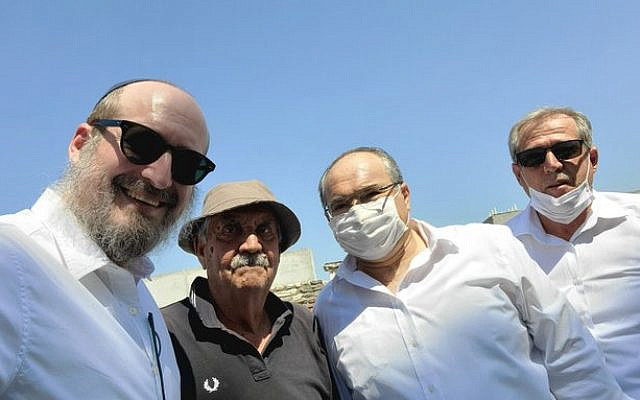 We looked at the 1500-year-old Jewish Restaurant that had only remains of Kosher foods, unlike the restaurant next door that has non kosher animal remains. When we were in Jacob’s shop, Imam Osman said, “I didn’t realize that Jews were here for so long.” 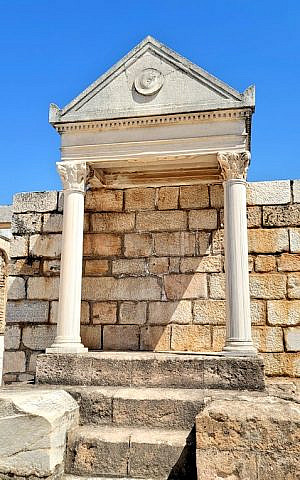 “This is the Arc, where the Holy scrolls were stored. There is an inscription that says so.” said Teoman. “It looks like the one in our synagogue”.

This ancient synagogue in Sardis is the oldest in Europe, and is more than 1200 square meters in size. It could hold close to 2000 worshipers at a time. Teomen told us that a new roof is being constructed to protect the beautiful mosaics from the elements. 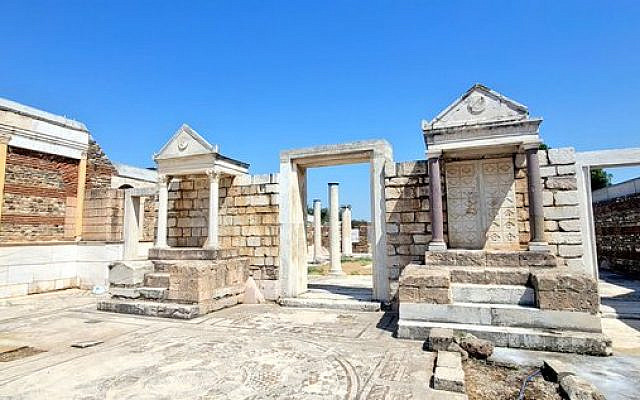 An Arc (Aron to store the scrolls), a Teva (reading table), seats for the elderly, and even a list of donors engraved in stone. Tell me, isn’t this just a typical synagogue?

With the 41° temperature of heat and the baking sun, my bold head and my fair skin aren’t doing well. Imam Osman and Imam Yaşar went to pray ikindi Namaz at the Sardis mosque. We patiently waited in the air conditioned car and drove around town until they were ready. 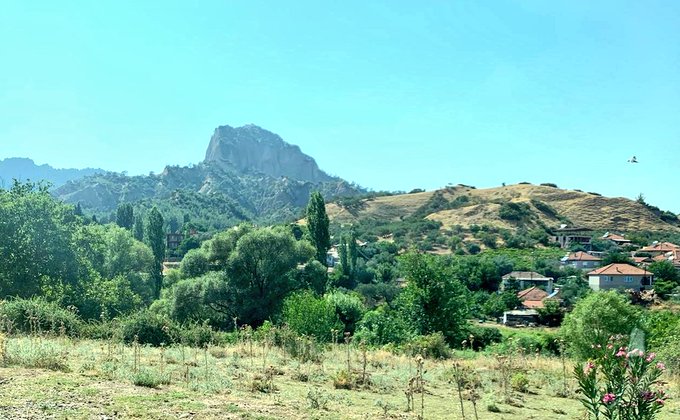 We then went to Akhisar, also in Manisa, where we first visited the meticulously kept remains of the Jewish cemetery. 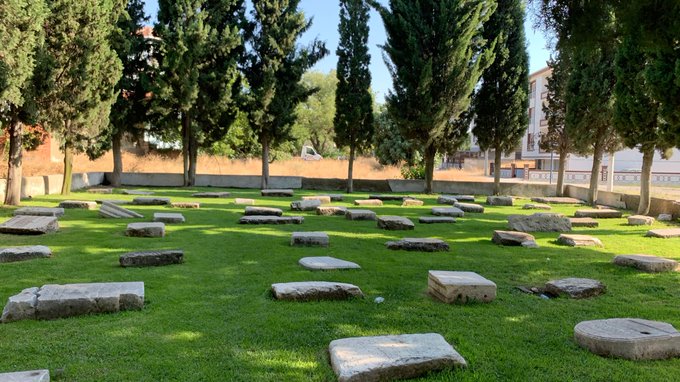 We don’t often get to see that a Jewish cemetery is looked after with such dignity! Well done Akhisar Belediyesi! 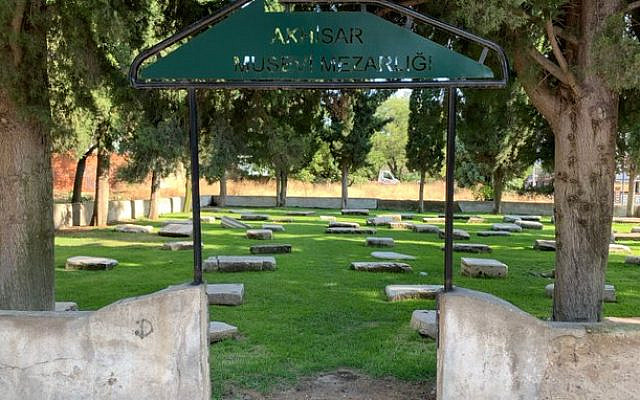 “Let’s go to my mosque.”, said Imam Osman and to the Ulu Cami we went. Imam Osman talked about acceptance of others. That Jews and Muslims should refuse to be enemies!

We had one tea after another and talked about Abraham and Moses. We spoke about our differences and about the things we share in common.

Of course, not wearing shoes but our happy socks are on display, too. 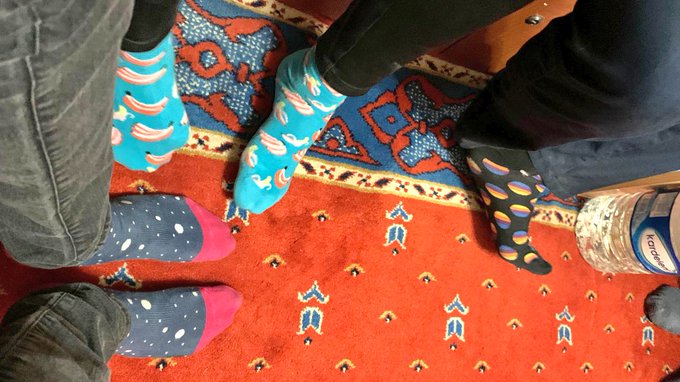 We talked about tolerance and coexistence; about morals and patriotism. 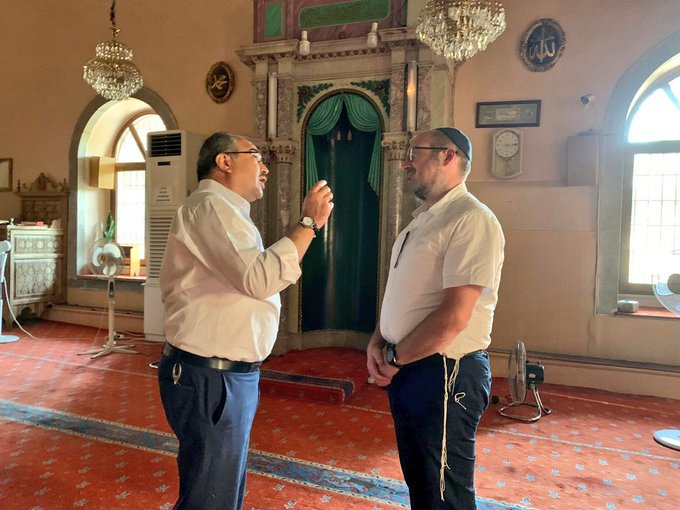 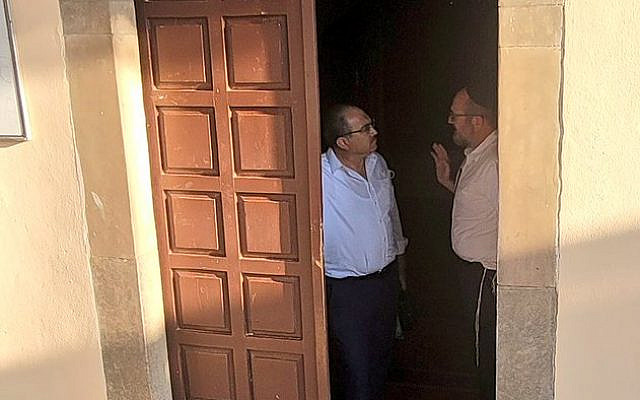 20 minute drive and 2 cups of tea later, and we are at the Or Yehuda agricultural school building in Akhisar.

Chaim and Eliezer jump over the gates to snap a few photos of the dilapidated but impressive structure.

It was time to part, but we can’t say goodbye without drinking a few more cups of hot Turkish tea.

Which again turns into a town hall style meeting where we meet Sabit, a chess champion.

It was a full day of exploring, visiting, discussing, arguing, agreeing, embracing and yes, a lot of hot tea!

Thank you Imam Osman and Imam Yaşar for taking us in as your guests, thank you Selim Ozturk for introducing us to each other! 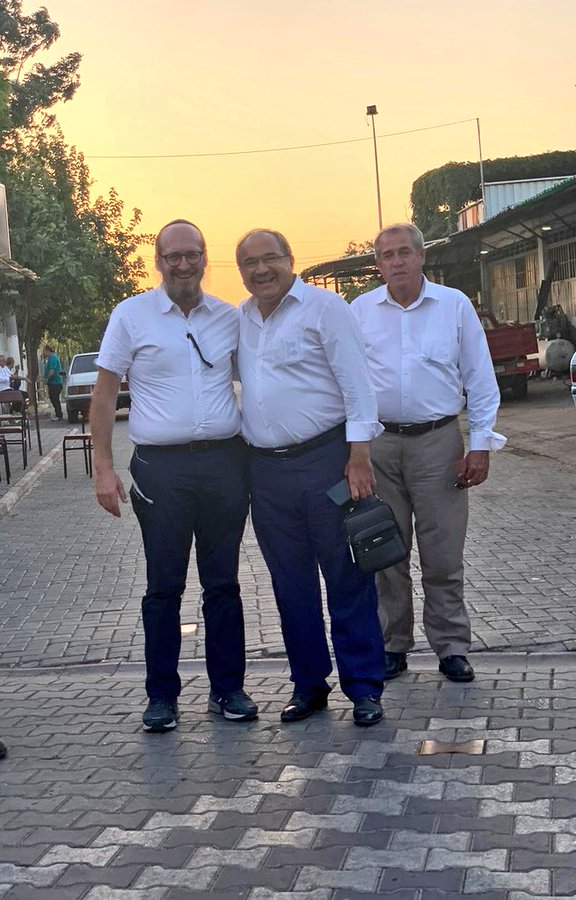 2 Imams and 1 Rabbi and a lot of common ground.
About the Author
Mendy Chitrik is the Ashkenazi Rabbi of Turkey and Chair of the Alliance of Rabbis in Islamic States. Follow me on twitter at @mchitrik
Related Topics
Related Posts
Comments