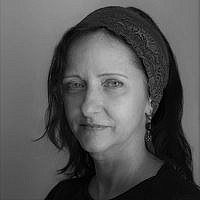 The Blogs
Ewa M. Maniawski
Apply for a Blog
Advertisement
Please note that the posts on The Blogs are contributed by third parties. The opinions, facts and any media content in them are presented solely by the authors, and neither The Times of Israel nor its partners assume any responsibility for them. Please contact us in case of abuse. In case of abuse,
Report this post.

In 2010 my American-born husband and I went to Poland – to Krakow, to visit my parents. It was his first time there. For me, it was the first time back since I had left for the US in 1988. After coming back to the States, I wrote a short piece for The Jewish News of Sarasota-Manatee. I recently re-read it during working on a session my husband, Richard Tuschman — a photography artist – and I were asked to hold with adult participants of The March of the Living in Krakow. I was struck by how it still resonated with me – even more so now, in 2018, when Richard and I have been settling into our Jewish life in an apartment 150 meters away from the (THAT) Krakow ghetto plaza, in a building that turned out to have housed the Jewish communal orphanage during the Shoah. It’s intense. Humbling. Gives us an additional reason to try harder, to grow, to live, to continue.

This will be a personal piece about the pain of undoing the results of education based maybe on lies, and definitely on omissions.

In case you have heard me speaking, and have not figured out my accent yet, yes, I was born in Poland. I spent most of my childhood, pre-teen, teen and college years in Krakow. This past summer was the first time when I went back after 22 years. I had extremely mixed (with the negative ones definitely prevailing) feelings about the trip, despite the fact that my extended family still lives there. I was not prepared for what I saw.

I left a Third World city. I found a first rate, sophisticated, European metropolis, where the architectural gems dating back to the 11th century have been finally properly preserved and proudly exhibited in all their astounding beauty. The city, especially the Old City, teems with life and tourists from all over the world. As you walk the old streets, you pass a café, a restaurant, a café again, a cute hotel, an art gallery, a café again, a hotel, an art gallery, and so on. It is simply lovely.

The Jewish Quarter. When I was leaving Krakow it was a crime-ridden, dilapidated area. Its synagogues were boarded up, their windows broken. Needless to say, that’s not the case now. I will spare you the details – you either know them, have been there, or you can easily find gorgeous pictures and articles on this subject on the Internet, or in so many books that have been written recently. Yes, there is a resurgence of Jewish life and interest in all things Jewish. By the way, the creator and the driving force behind an immensely popular annual Festival of Jewish Culture in Krakow is my college classmate from Jagiellonian University. Of course not everything is so rosy. Walking up to one of the beautifully renovated synagogues I could see graffiti on its wall – the Star of David with the word “Jude” under it. There were more of those in other places.

I am finally getting to the main point of my story, which is the central square of the Jewish ghetto, and the Schindler’s factory.

One night my high school girlfriend, with whom I reconnected after those 22 years, was driving my husband and me back to the place we were renting. Since our conversation revolved around “all things Jewish”, she took a detour to show us a very unusual Holocaust memorial erected on the square that used to be a center of the Jewish ghetto, and from which the Jews were deported to Auschwitz during the liquidation of the ghetto. As we drove into the square, I felt a sudden surge of fury. I knew that square very well. For years, I used to pass through it twice a day, taking a tram on the way to my high school in the Old City. From time to time, especially in the winter, I would spend an hour or more at a stop there, waiting for a replacement tram that would take us to our destination. The trams had the habit of breaking down a lot. All these times I had absolutely NO idea where I was standing, what that place meant, what suffering took place there. There was no mention of it anywhere. There was no mention of it during history classes we took either in high school, or at the university. The sudden realization that I unknowingly spent countless hours standing on the same cobblestones that bore the memory of unspeakable human tragedy was painfully humbling, and the anger almost crippling. As was the realization that the factory I had to do my compulsory pre-college internship for two months was in fact the Schindler’s factory. Again – at the time no one knew about it. Sins of omission.

Knowledge is power. Access to information is power. Education is power. Denying them to others is a crime. Having to re-learn, re-evaluate, undo, peel away the layers of lies you had been fed is an excruciating, lifelong process that so often leaves you angry, but eventually liberated. We, educators, cannot take part in twisting the history or commit sins of omission – there is no Yom Kippur prayer, there is no Vidui that would absolve us from them.

About the Author
Ewa grew up in Europe, spent 30 years in the U.S., and recently moved to Krakow, Poland with her artist husband. A Jewish professional and consultant, she is passionate about building communities that "love one's neighbor as oneself."
Related Topics
Related Posts
Ewa M. Maniawski
Comments