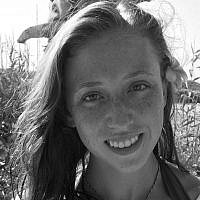 The Blogs
Ronit Davis
Apply for a Blog
Advertisement
Please note that the posts on The Blogs are contributed by third parties. The opinions, facts and any media content in them are presented solely by the authors, and neither The Times of Israel nor its partners assume any responsibility for them. Please contact us in case of abuse. In case of abuse,
Report this post.

Before I even visited, I decided I wanted to write about my 24 hours in Ramallah, but a few weeks later and I still don’t know exactly what to say, and I definitely don’t know how to say it.

It always feels so easy to write about Israel, so comfortable, but Ramallah, the West Bank and all the feelings my visit left me with, are complicated, and definitely not comfortable. I am no expert on the Middle East and in my quest to learn more I have more questions than I do answers.

Last summer in Tel Aviv, the decisions Israel made seemed clear to me, and the threats to Israel’s security were painfully obvious. A year later, and a chance to go into the West Bank, things don’t seem so clear.

I felt frustrated that despite the very real need to check Palestinian permits, there are not the appropriate facilities set up for Palestinians to enter Israel in a reasonable time frame, nor are they always treated with respect. Most especially because I didn’t even have my passport checked when I entered Ramallah or when I left.

I felt frustrated that many Arabs in Ramallah feel scared to get too close to settlements because they think there is a possibility they could be harmed.

I felt frustrated that my friend, who has been to Israel many times, and was part of an Israeli-Palestinian dialogue group with me, was denied entry into Israel once, even though he had a permit, and really should have been allowed in.

I felt frustrated when I learnt that his childhood home was collateral damage in an Israeli operation against a neighbour, and there was no compensation for his family when they had to start their lives again.

I felt frustrated that I was surrounded by settlements all above Ramallah, like they are in some way looking down at it, most especially because settlers are Jews like me, and I am in no way above the Palestinians in Ramallah.

Yes, I felt so frustrated in Ramallah. I felt frustrated on behalf of my friend, and the ordinary Palestinians living in the West Bank, who just want to lead an independent, normal life, free of these frustrations.

But, I felt frustrated for me too.

I felt frustrated that Israel’s security concerns didn’t seem to be viewed as legitimate by those I met, even though they absolutely are.

I felt frustrated that Arafat is viewed as a martyr throughout Ramallah, when he turned his back on the last real chance everyone had at peace.

I felt frustrated that despite my trying to understand the Palestinians I met and their opinions, they didn’t seem to understand mine.

I felt frustrated that they believe one narrative about the conflict and I believe another.

I felt frustrated that they don’t think Israel takes responsibility but I don’t think they always do either.

I felt frustrated that they hear extremely different things on the media than I do.

I felt frustrated that whenever I spoke politics, which I did the whole time, people felt I represented an enemy, something evil. Whilst I know Israel, like anywhere, is imperfect, I truly believe that at its core it is a good place.

I felt frustrated that I didn’t know what to say to make things better, that I didn’t and still don’t have any solutions for these problems.

Without a doubt my visit to Ramallah was frustrating, but it was also eye-opening, and it happened it be a lot of fun. I discovered a narrative so completely different to the one I have grown up hearing; a narrative that has forced me to think and question things. I believe in Israel’s narrative, and if only in a small way have experienced it, but I don’t believe that the Palestinian narrative is entirely without validity. So, if I have one resolute feeling after a trip that ultimately confused me, it’s that as a hopeless optimist, I must remain hopeful. Hopeful that one-day these two narratives won’t oppose one another so aggressively, and that a just but realistic resolution will eventually come to pass.

About the Author
Ronit is a British/South African college student in America with a serious case of wanderlust. She has interest in all things Israel and the Middle East, that almost borders on obsessive. After living there last year she can always be caught scheming on how to go back. A chatterbox by nature, she wants to talk about the ups and downs of having a long-distance relationship with Israel.
Related Topics
Related Posts
Comments