The Blogs
Elise Ronan
Justice, justice, you shall pursue....
Apply for a Blog
Advertisement
Please note that the posts on The Blogs are contributed by third parties. The opinions, facts and any media content in them are presented solely by the authors, and neither The Times of Israel nor its partners assume any responsibility for them. Please contact us in case of abuse. In case of abuse,
Report this post. 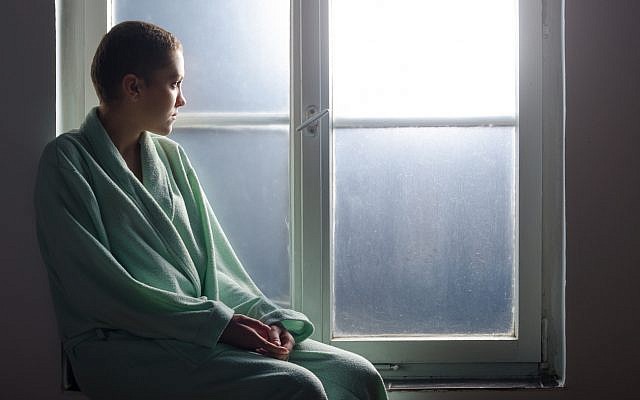 Three years ago, this December, my surgeon called to let me know the original biopsy was wrong. Yes, indeed, I had breast cancer. She said it quickly. Matter-of-factly. Let me know that it was only Level 1 and that it had not migrated from the original site. So all I needed was radiation. No chemo.

You know the funniest part? 2015 was such a horrible year for my family, that the fact that my cancer was only “mild” cancer, was actually the best thing that happened to us at that time. I kid you not.

Now, of course, it did dawn on me about a year later, that I had had cancer. That I had gone through treatment. That I was on medication, Anastrozole, that was considered a preventative, to try to keep the cancer from returning.

It hit me one day as I was driving along the highway. I suddenly got palpitations, sweat starting breaking out, and I felt not a little nauseous. Of course, that could also have been from the Anastrozole, but on the other hand, I figure it was a gift to finally get to the point that, hey, I was scared.

And yes, the fear lasted for awhile. It would wake me up at night, leaving me so overwhelmed that I could not get back to sleep. Except, that could have been because of the Anastrozole.

And yes, I finally became  sad, but not angry, or someone full of self-pity. Perhaps, as the psychologist would tell me, it was the right psychological reaction to having cancer, or, maybe, it was the Anastrozole.

And yes, my muscles hurt when I walked, and my joints felt old. Now, that could be me nearing 60, or it was the Anastrozole.

And yes, I had shortness of breath when I tried to exercise, either on my crosstrainer or indoor bike. Again, it could be age, or it could be the Anastrozole.

And yes, there were lines in my face, and my skin looked sallow. Could be that I spent too much time indoors, or it could be the Anastrozole.

And yes, my hair became very thin, and started falling out of my head. Could be anxiety and female pattern baldness, as the dermatologist said, or it could be the Anastrozole.

And yes, I have this pot belly, and my hands are swollen. Could be my diet, or it could be the Anastrozole.

I was just so abjectly physically unhappy.

But then one day, the hubby found a forum online, that talked about medical side effects of these drugs, that indeed they are cumulative, and how some women took a medicine vacation.

So finally, after almost three years of the Anastrozole and feeling as if I were 20 years older than I really am, my doctor said I could take a hiatus and we would try something else. (Meanwhile, I had already tried Exemestane and tamoxifen). This would be the fourth med, the only one left. Letrozole.

Interestingly, during this “spring break” month, my muscles no longer hurt, my joints don’t creak, I can exercise like a champ, my hands are not swollen, my pot belly has disappeared, my friends say my skin is glowing and the lines in my face are disappearing, my hair and nails are back to normal strength and fullness, and while I am not happy-go-lucky, I no longer feel an overwhelming sadness or anxiety every waking moment. At times, when I wake at night, I am actually even able to get back to sleep.

After all, you are one of the lucky ones.

But I think we need to stop feeling that we are cheating fate, or tempting the evil eye. If only we talked amongst ourselves, us — the breast cancer survivors — and acknowledged that the medicine that we take everyday for over five years, is making us miserable. It is okay. We are allowed. This does not mean we do not know how fortunate we are to live in a time when these drugs are available to us.

I don’t know if this because it’s a woman thing, that we are supposed to be compliant, happy girls when something goes our way. Don’t be  snobby, don’t be rude, don’t be a “cow.” Just accept the reality without causing trouble.

Of course, there is being the “good girl,” the one who takes all the burdens on yourself,  and then there is not talking about reality too.

We should talk about what this medicine does to us.

Not that we don’t take it.

Not that we are not happy that it exists.

But it can make you miserable.

Sometimes it’s really okay to speak the truth, and it doesn’t make you a selfish bitch.

It gives you camaraderie, and makes you feel not so alone.

Meanwhile, my medicine vacation is coming to an end January 1. I am terrified of what will happen. I don’t want to go back to feeling so utterly inhuman. Hubby of course, said, try it and see what happens.

“It is still better than cancer.”

So I will take the pill as the New Year begins. Hopefully, I will be able to tolerate it better than the last. I have two years of treatment to go.

Meanwhile, my yearly mammogram is tomorrow. Odds are that it will be clear just like the last few.

But, as with all cancer survivors, I  also have Plan B, if anything comes back positive.

About the Author
#RenegadeJew ...Elise's specific background deals with the practical aspects of raising special needs children. She has over 20 years experience advocating for her sons and others. Her motto: Don't put off the important things. Stand up for what you believe in. Do what is right and honest. Have patience. Have self-respect. Be kind. And above all BE BRAVE. Elise is a graduate of Boston University Law School and a Certified College Transition Coach for Persons with Asperger's Syndrome. She blogs under a pen-name to protect her sons' privacy.
Related Topics
Related Posts
Comments