The Blogs
Aaron Jacob
Apply for a Blog
Advertisement
Please note that the posts on The Blogs are contributed by third parties. The opinions, facts and any media content in them are presented solely by the authors, and neither The Times of Israel nor its partners assume any responsibility for them. Please contact us in case of abuse. In case of abuse,
Report this post. 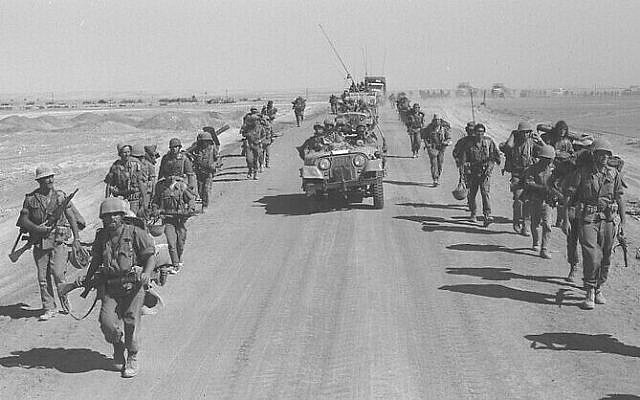 On October 6, 1973 — Yom Kippur by the Jewish calendar — Egypt and Syria launched a surprise attack against Israel along the Suez Canal and in the Golan Heights.

In the first 24 hours, the Egyptian army overwhelmed the thinly manned Israeli positions and occupied a 15-kilometer-(some 9 miles)-wide strip of land on the canal’s eastern bank. An attempted Israeli counterattack on October 8 failed with  heavy IDF casualties. Only after the IDF crossed the canal on October 16 did it seize the initiative, encircling the Egyptian Third Army and advancing to 101 kilometers (nearly 63 miles) from Cairo.

The Syrian army swept into the southern part of the Golan, nearly reaching the Sea of Galilee, before it was pushed back by an Israeli counterattack. By the war’s end, the IDF seized Syrian territory on the northern part of the front, reaching as far as 40 kilometers (about 25 miles) from Damascus.

Only six years earlier, Israel had achieved a far more decisive victory. Responding to an imminent strategic threat from Egypt, and unprovoked attacks by Jordan and Syria, Israel captured the Sinai Peninsula, Gaza Strip, West Bank, and Golan Heights — altogether an area more than three times larger than its own size — within six days.

What went wrong between 1967 and 1973? The answer lies in two false assumptions. Israeli leaders had believed that the next war would look the same as the previous one. But the gravest mistake was the embracement of a concept, promoted by then-defense minister Moshe Dayan, that Egypt would not attack unless it had first matched Israel in airpower.

The Egyptian surprise attack in 1973 shattered that concept. The basic Israeli premise was that Egypt faced a binary choice: total war or truce. As it happened, Egyptian president Anwar Sadat chose a third option, a limited war designed not to liberate the entire Sinai, but to end the status quo and set the stage for a political process that would lead to Israel’s total withdrawal from Sinai.

The Egyptian army nullified Israel’s air superiority by using anti-aircraft batteries. It also neutralized Israel’s advantage in open-field warfare by conducting, essentially, a static war: it conquered a narrow strip of land along the Suez Canal and dug in.

The war changed course after Israeli forces crossed the Suez Canal on October 16. From that point on, the Egyptian army was in retreat, and was saved from total defeat only by the ceasefire declared by the UN Security Council in resolutions adopted on October 22, 23, and 25.

Militarily, Israel had the upper hand. But the outcome of war is measured in political, not military terms. By this criterion, the 1973 war was an Egyptian success. It ended the territorial and political status quo and started a political process that resulted in the return of Sinai to Egypt. However, the conclusion of that process — an Egyptian-Israel peace treaty — has also hugely benefitted Israel. Syria, on the other hand, has persistently rejected Israel’s peace overtures.

Of the war’s various lessons that have been debated since 1973, four are most relevant. First, a military victory can be detrimental to the victorious party if it leads to complacency and stagnation. In the first phases of the 1973 war, the IDF fought the previous war. It relied heavily on the air force although the latter was severely constrained by the Egyptian anti-aircraft batteries, and it attempted to change the course of the war by using tank formations without adequate support from auxiliary forces.

Second, before the 1967 war, Israel’s national goals were clearly defined: defending Israel against its enemies, striving to achieve peace agreements with Arab neighbors based on the lines of the Armistice Agreements of 1949, and maintaining Israel as a Jewish and democratic state. Surely, Israelis continue to support the first goal, but there is no consensus on what Israel’s final borders should be, and, as a result, no consensus on how to preserve Israel as both Jewish and democratic. Before the 1973 war, Dayan famously said, “Better Sharm El Sheikh without peace than peace without Sharm El Sheikh.” After the war, he reversed his position. Lack of clarity about national goals obscures strategic thinking.

Third, Dayan’s theory that Egypt would not dare attack Israel unless it achieved parity with the Israeli air force led to a strategic miscalculation. In a democracy, every citizen has an obligation to think and form their own opinion, not to blindly follow charismatic leaders who, presumably, are never wrong.

Finally, the peace treaty between Egypt and Israel provides compelling proof that the Arab-Israeli conflict is not a zero-sum game. Losses for one side can result in losses for the other side, too, just as gains for one party can bring about gains for the other.

About the Author
Aaron Jacob is the American Jewish Committee (AJC) Director of Diplomatic Affairs. He served in the IDF during the Yom Kippur War as a combat officer in an armored division in the Egyptian front.
Related Topics
Related Posts
Comments