The Blogs
Glen Segell
Apply for a Blog
Advertisement
Please note that the posts on The Blogs are contributed by third parties. The opinions, facts and any media content in them are presented solely by the authors, and neither The Times of Israel nor its partners assume any responsibility for them. Please contact us in case of abuse. In case of abuse,
Report this post. 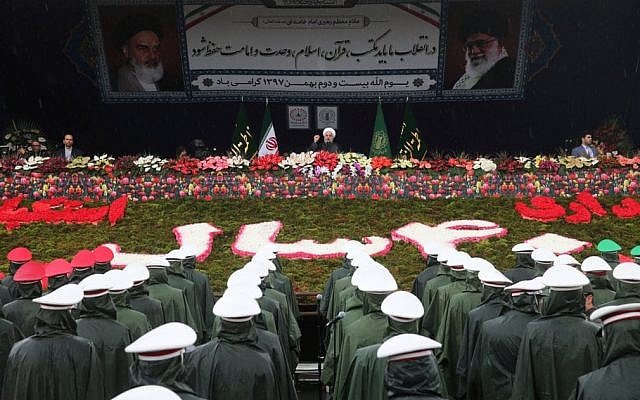 On February 1, 1979, Ayatollah Khomeni returned from exile to Iran and following 10 days of violent protests, annually commemorated as the “Ten-Day Dawn,” it was the official end of the 2,500 years of the Persian Empire. On February 11, 1979, the size of grassroots support for the revolution, replaced Shah Mohammad Reza Pahlavi’s government with an Islamic Republic under Supreme Leader Ayatollah Ruhollah Khomeini. It also marked the end of an amazing period of diplomatic and other relations between The State of Israel and Iran, that between Jews and Muslims.

On February 11 2019 some Iranians took to the streets across the country to mark the 40th anniversary of the 1979 revolution, renewing their allegiance to the country’s Islamic principles at a time of rising economic and political pressure amid the renewed punishing US sanctions aimed to force Iran to negotiate the development of its missiles as well as its military presence across the region. Banners held by marchers or hung in the streets bore slogans including Death to America, Death to Israel, and 40 years of challenge, 40 years of U.S. defeats. The response came in a tweet that was also sent out in Persian, by American President Trump who said: “40 years of corruption. 40 years of repression. 40 years of terror. The regime in Iran has produced only #40YearsofFailure.” Trump also said last week “Iran “chants death to America and threatens genocide against the Jewish people,” adding “We will not avert our eyes from the Islamic Republic.”

Other Iranians didn’t take to the streets. Since the revolution, which united the country against the Shah, the country appears today to be more divided between the hardliners, who believe in the strict implementation of laws from 40 years ago, and the reformists, who are pushing for more economic transparency and more freedoms among its population.

For Israel the issue is the belligerent intentions of the Iranian regime ever present as seen from the statement of Iranian President Hassan Rouhani to demonstrators gathered at Tehran’s Azadi (Freedom) Square to commemorate the Revolution. He dismissed US efforts to isolate Tehran, saying “The presence of people today on the streets all over Islamic Iran … means that the enemy will never reach its evil objectives… we will continue to pursue the missile program to defend the country from external threats. We have not asked, and will never ask for permission in developing our missile arsenal as we continue to pursue our path to military might.” Here I should emphasize that he said “military might” which is an aggressive and offense orientated statement and not defense orientated.

In my opinion on Wednesday February 13 2019, there will be an opportunity for those threatened by Iran to respond. There will be a US organized summit in Warsaw, Poland. Israeli Prime Minister Benjamin Netanyahu, as well as leaders from Iran’s regional rival Saudi Arabia will be there and can promote “a future of peace and security in the Middle East”. Even European Union states who would prefer to keep the 2015 deal alive have criticized Iran over its “destabilizing” ballistic-missile program, its “hostile activities” in several EU member states, and its meddling in countries in the Middle East.

Indicative of Iranian belligerence and refusal to promote cooperate and peace Iranian Foreign Mohammad Javad Zarif said: “The summit is doomed to failure from the start.” This was reinforced by Brigadier General Hossein Salami the deputy commander of Iran’s Islamic Revolutionary Guards Corps (IRGC) who dismissed calls that Iranian regional influence should be curbed, saying “the enemy cannot ask us to leave the region, they must leave the region.”

In my opinion there are two options for the future given Iranian threats. The first is regime change. The other is that Iran doesn’t have to experience a regime change. It can transition to the concept of rule of law from the the idea of expediency. An analogy and role model is the former USSR. It is an excellent example of a state that once experienced a revolution in 1917, threatened world peace and security for decades including by a missile and nuclear program, yet by 1989 had disintegrated. It left its core the current Russia to be accepted by the international community as a respected state while some of its other components gained independence and became members of the European Union and NATO. There is in my view therefore potential and hope that one day Israel and Iran will renew diplomatic relations and send an Ambassador to Teheran, following the excellent work once down by Israel’s Ambassador there, the late Meir Ezri z”l.