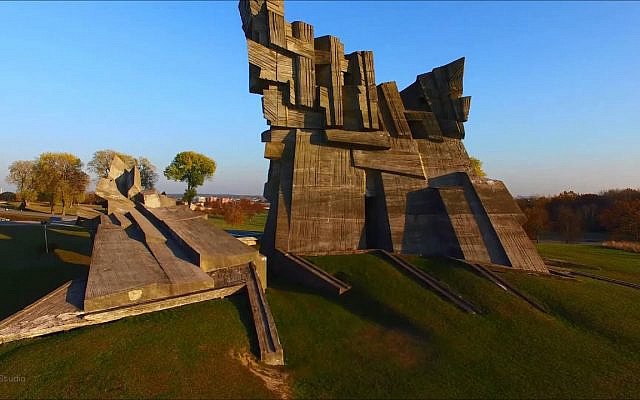 The Ninth Fort of Kaunas Fortress, the memorial to the victims of Nazism, designed by sculptor A. Ambraziunas, 1984. The mass burial place of the victims of the massacres carried out in the fort is a grass field, marked by a simple yet frankly worded memorial, reading: 'This is the place where Nazis and their assistants killed about 45,000 Jews from Lithuania and other European countries,' making no mention of Lithuanian collaboration. (screenshot, YouTube)

Several days ago, I was shocked to learn that five heads of state from Lithuania, Romania, Estonia, Latvia, and Poland, all post-Communist Eastern European countries, had recently beseeched the leaders of the European Union to step up efforts to “preserve historical memory.” It was addressed to the European Council president, European Commission president, and the Czech prime minister, whose country currently holds the rotating EU presidency.

For the past three decades since their transition to democracy, these countries have excelled in grossly distorting their own respective histories of the Holocaust. Yet the quintet of leaders now maintains that the Kremlin “is seeking to rewrite history and use it to justify its aggression against sovereign states.” Thus, they urge the bodies of the EU to take a leadership role in “preserving historical memory and preventing the Russian regime from manipulating historical facts.” They contend that this concern “is particularly relevant in light of Russia’s intensive use of history for propaganda purposes in the context of the war in Ukraine.”

These heads of state know how to deal with this problem of rewriting history. They recommend the following four steps as the means of taking corrective measures:

These steps constitute a renewed effort to establish a false historical narrative as the “accurate/universally accepted” narrative of World War II and the Holocaust. Particularly ironic, coming from these five countries, is their statement: “Without an accurate, honest, and comprehensive assessment of the past, we will not be able to effectively prevent future crimes on our continent or investigate the current ones in Ukraine.”

Each of these countries has produced its own false narrative of the events of the Shoah, either extremely minimizing or completely erasing the highly significant role played by their own local Nazi collaborators. It must be noted that only in Eastern Europe did collaboration with the Nazis include participation in the systematic mass murder of Jews. None of them is ready to admit the full scope and significance of their complicity and culpability.

There is, of course, no doubt that the Russians are manipulating history to justify the invasion of Ukraine. Nevertheless, a plea by these leaders to “preserve historical memory,” is the height of hypocrisy and chutzpah. Before making demands on the EU, let them begin to practice what they preach at home.

With the exception of one case in Poland, not a single Holocaust perpetrator has been convicted and punished in any of these countries since independence. They are reluctant to return Jewish property and compensate survivors. In short, they have totally failed to confront their crimes, and have failed in every aspect of dealing with the Shoah.

Indeed, in the Baltic countries, they have glorified anti-Communist fighters, even if they were Holocaust perpetrators. These figures include active participants in the murders of Jews, such as Lithuanians Jonas Noreika and Juozas Krikstaponis and Latvians Herberts Cukurs, Voldemar Veiss and Vilis Tunkelis, among numerous others. They continue to promote the canard of equivalence between Communist and Nazi crimes.

Brussels should therefore put pressure on these countries to begin telling and teaching the truth about the Holocaust and the role played by local collaborators in their own countries, instead of complying with the requests in the letter of the quintet.

The Jewish people have two foundational narratives about our history in the 20th century: the Zionist narrative of our return to Eretz Yisrael, the land of Israel, and the chronicle of the Holocaust. When the Palestinians deny the former, we respond strongly, but Israel has failed to respond forcefully to the Eastern European distortions regarding the Holocaust that have been on offer ever since these countries obtained independence. The letter of the quintet should be a wake-up call for Israel as well.

About the Author
Dr. Efraim Zuroff is the chief Nazi-hunter of the Simon Wiesenthal Center and the director of the Center's Israel Office and Eastern European Affairs.
Related Topics
Related Posts