The Blogs
Nathan Bigman
Apply for a Blog
Please note that the posts on The Blogs are contributed by third parties. The opinions, facts and any media content in them are presented solely by the authors, and neither The Times of Israel nor its partners assume any responsibility for them. Please contact us in case of abuse. In case of abuse,
Report this post.

Now that we learned from Yitzhak Pindrus that women who convert to Judaism through the IDF are not Jewish, here’s why the rest of us aren’t, either.

So none of us light-skinned, light-haired, or Persian people should cast the first stone. See, I’m already starting to quote Jesus – that’s what happens when Yitzi Pindrus opens his mouth without thinking.

The good news is, you are Jewish, cuz I say so. Here’s a letter that you can present to Yitzi or anyone else who doubts it. Problem solved. 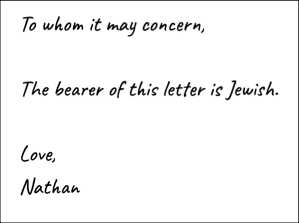