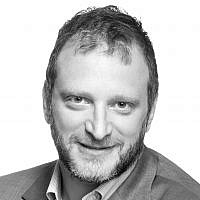 The Blogs
Adrian Daniels
Apply for a Blog
Please note that the posts on The Blogs are contributed by third parties. The opinions, facts and any media content in them are presented solely by the authors, and neither The Times of Israel nor its partners assume any responsibility for them. Please contact us in case of abuse. In case of abuse,
Report this post.

Israel is a remarkable country. Despite the challenges it faces, its credit rating is high, its high-tech brand remains untarnished, its scientists lead the world in Nobel laureates per capita, it retains a strong and well-trained army, it leads the world in vaccinations per head, and day to day life is generally good. Is it any wonder there is enormous inertia against replacing our Prime Minister at the ballot box? Even those who are concerned by Netanyahu’s divisiveness, his attacks on the justice system and attempts to evade his court case, are still concerned that any replacement will only be for the worse. In fact, Netanyahu’s “stickiness” is all the more impressive, given the current election is not being fought as a battle between Right and Left.

But despite all of that, I will not be voting for Bibi or any party that has committed to or is likely to enter into a coalition with him. If you are still thinking of voting Bibi or even Bennet, here are some additional factors you may want to consider before casting your vote.

Even if you believe that Bibi has been a world-class leader despite his flaws, a vote for Bibi or even Bennett could result in significant long term adverse consequences for this country. While no alternative may seem ideal, they will not be worse and will hopefully be better. Right now, as we emerge (hopefully) from the ravages of the past 12 months, we need a leader less fixated on short term personal goals, and a government focused on national and not sectoral issues. A Bibi victory will result in neither.