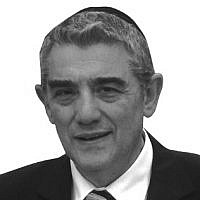 The Blogs
Eli Schussheim
Apply for a Blog
Advertisement
Please note that the posts on The Blogs are contributed by third parties. The opinions, facts and any media content in them are presented solely by the authors, and neither The Times of Israel nor its partners assume any responsibility for them. Please contact us in case of abuse. In case of abuse,
Report this post.

Israel has some of the most liberal laws on abortion in the western world. Around 40,000 abortions are carried out each year; that is about 110 abortions every single day. There is no protest or public outcry; there is no real debate in the public discourse. No pro-life or pro-choice movements.

Recent legislation is making it even easier by enabling women between the ages of 20-33 to receive free government funded abortions. The Israeli Ministry of Health will now pay $4.6 Million annually to abort thousands of healthy unborn babies in healthy wombs. Surely this money could be better spent on helping the sick, or even helping those that want to keep their baby but can’t afford it.

In a country where preservation of life is paramount, and citizens are encouraged to be fruitful and multiply, thousands of women each year feel financially pushed into a corner; reluctantly they abort their fetus, only to regret it for the rest of their lives.

After decades of working as a surgeon in some of Israel’s largest hospitals, I was disturbed to learn that the majority of abortions in Israel occur because of financial pressure. While it costs the government $750 to abort healthy babies, we discovered that for $1,200 we could provide the essentials needed to give women the peace of mind to keep thier baby. As the son of holocaust survivors, I could see no better mission in life than helping to fill the world with more Jewish babies.

It was for this reason that I joined forces with EFRAT-C.R.I.B, an organization that empowers and assists women that have become pregnant, want to give birth, but can’t afford to keep their baby.

In fact, since 1977, EFRAT-C.R.I.B has assisted over 56,000 mothers to give birth. In Israel, this is the equivalent of two cities full of people. We don’t protest, we don’t lobby the Knesset. We simply let people know that if they need us, we are here for them.

In a country where you have to pay for birth control but can receive free government funded abortions, we educate potential mothers about some of the basic facts of life. We let them know that within the first few weeks they are carrying a fully-fledged potential human being inside them. That it is the most wonderful gift they could ever wish for and a responsibility they should not take lightly.

EFRAT-C.R.I.B is not pro-life or pro-choice in the American sense. We simply believe that women should be able to choose to give birth without societal or financial pressure. Every woman that comes to us does so because they want to keep their baby. Our support comes in the form of care packages with all the essential items they need to comfortably relax and bring their bundle of joy into the world.

For up to two years we provide everything from cribs to baby baths, baby formula to food and clothing. Depending on their proven financial need, we also provide essential food packages for the rest of their family. It is a very simple solution to a very troubling problem. Through the generous donations of concerned individuals worldwide, we have discovered the cure to unnecessary abortions.

I can honestly say that in my 37 years at EFRAT-C.R.I.B, I have not met a single mother that regretted giving birth, with our assistance. Unlike elsewhere in the world, here in Israel, there are no violent protests or raging debates for or against abortion. However, a quiet revolution is taking place, one baby at a time, not because we are against abortion but because we love bringing Jewish babies into the world.

About the Author
Dr. Eli Schussheim is a highly regarded Israeli surgeon and the director of EFRAT-C.R.I.B, an organization that empowers and assists women that have become pregnant, want to give birth, but can't afford to keep their baby. In addition to moral support, EFRAT provides care packages with all the essentials needed for up to the first two years after the birth, including cribs, strollers, clothing, baby baths, diapers and food. Since its establishment in 1977, EFRAT-C.R.I.B has assisted over 56,000 Israeli mothers to give birth.
Related Topics
Related Posts
Comments