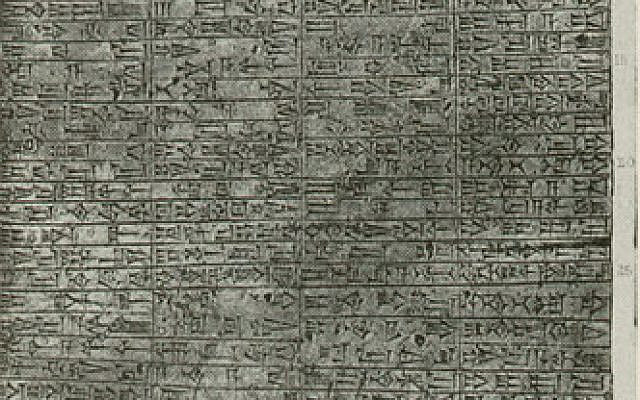 In last week’s and this week’s parashiot Moses begins receiving Laws from God to pass down to the Children of Israel. In parashat Mishpatim, our liberal, modernized norms, as educated Jews, are somewhat shocked and offended at the pshat interpretation, that we should have slaves (be they Hebrew slaves, set free in the seventh year of servitude—the ‘jubilee’—or “Canaanite” slaves, who are to be circumcised and fulfill other mitzvot), and serve their Hebrew masters forever. But since 1901 A.C.E., archeology and history can attest to the fact that Moses’ Laws, concerning slaves, could possibly have its roots in a slightly older, Babylonian society.

Hammurabi was the king of Babylon who reigned between 1795 to 1750 B.C.E. He, like Moses our Rabbi, was known for the legal code he introduced to his subjects. The Code of Hammurabi was found in 1901 A.C.E on a stele. It is divided into 12 sections and is made-up of 282 laws, (34 of which have proven impossible to translate from their cuneiform). To put things into chronological perspective, Moses’ giving over of the Law, in this week’s parasha, occurred circa 1440 B.C.E., on the Gregorian calendar. That means the laws of King Hammurabi of Babylon predate the 613 mitzvot by about 300 years.

While, there are plenty of similarities between Hammurabi’s and Moses’ Laws—in what the subject matter and the grounds which they introduce legislation over: property matters, financial matters, criminal matters, et cetera; there are an equal amount of differences. But one law in each code that I have been having fun comparing is the law concerning a slave’s freewill pertaining to their state of servitude. In the Hebrew Law, if a Hebrew slave does not want to be set free, he shall have a hole pierced in his ear, up against a doorpost. Whereas, if a Babylonian (Mesopotamian) slave does wish to go free, he shall have his ear removed by his master. These two cases stand opposite one another.

We also find a classic conundrum of much contradiction between the Torah and the Jewish liturgy concerning the institution of slavery. First, when Joseph is sold into slavery in Egypt, and subsequently the nation follows him there and endures 400 years of backbreaking servitude under Pharaoah (Ramses), it is clear that the Torah is admitting the misery and injustice of slavery as an institution. In both Sephardic as well as Ashkenazic prayer books, as part of the pre-Shacharit (morning) prayers, we recite the following blessing: ברוך אתה יי, אלהינו מלך העולם שלא עשני עבד This—as I’m sure my readers will recognize—translates to, in short: “Bless God, Who hasn’t made me a slave.” This reconciles our question about the justices and injustices of slavery, within modern liberal sentiment. It is important to note, the Babylonian civilization never had such an awakening. Today, international law seeks to protect citizens of all nations and societies from slavery: The United Nations’ Universal Declaration on Human Rights (1948) states in Article 4: “no one should be held in slavery or servitude, slavery in all of its forms should be eliminated.”