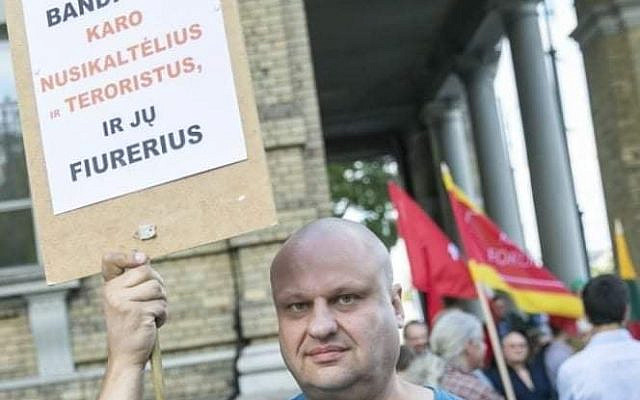 Political scientist and blogger Giedrius Šarkanas is already the 5th anti-Holocaust activist sentenced to prison by the Lithuanian regime. On 15 September 2020, the Vilnius City Court gave him 3 months of prison for his article “Lithuanian freedom fight: the end of another myth” where he criticizes Lithuanian Nazi criminals for murdering innocent and unarmed civilians from 1941 to 1952.

By the order of the court, the article has already been deleted, but one may still read its content in the very judgment on merits dated 25/04/2018. According to this judgment, the anti-Holocaust blogger made the following statements:

According to the judgment on merits, the article had a “negative emotional attitude towards” the Nazi terrorists.

The court concludes that the blogger failed to underline that not all members of the Lithuanian Nazi military forces were terrorists, and therefore the blogger is sentenced to 3 months of prison.

There is no surprise that the Lithuanian judicial system follows the general neo-Nazi line of the contemporary Lithuanian regime.

Neo-Nazi judge Egidijus Kūris sitting at the European Court of Human Rights describes the Lithuanian Nazi military forces active from 1941 to 1952 as “the body and the spirit of the Lithuanian ethnic nation.” How could a lower judge deviate from this ideological line?

Let’s keep in mind the full list of anti-Holocaust activists who got a prison sentence from the Lithuanian regime:

Unfortunately, there is also a list of murdered anti-Holocaust activists of Lithuania:

Those people were murdered by Neo-Nazi gangs ideologically supported by the Lithuanian regime, and allegedly by the State Security Department (former KGB).

These are the heroes of the contemporary Lithuania admired and glorified by President Gitanas Nauseda and Prime Minister Saulius Skvernelis. All those “heroes” were decorated with the Knight’s Cross, promoted to the ranks of “colonel”, “general” or “President of the Republic” after death within the last 30 years. They are “the body and the spirit of the Lithuanian ethnic nation” according to the European judge Egidijus Kūris. There are streets and schools named in their honor.