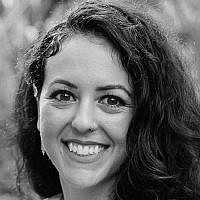 The Blogs
Andria Aylyarov
Apply for a Blog
Please note that the posts on The Blogs are contributed by third parties. The opinions, facts and any media content in them are presented solely by the authors, and neither The Times of Israel nor its partners assume any responsibility for them. Please contact us in case of abuse. In case of abuse,
Report this post.

If you are actively watching the violence in the Middle East unfold thanks to the terrorist group Hamas, you’re most likely also plugged into the blatant antisemitism and bias against Israel by the US media, celebrities, and influencers alike. As I take calls from my sister in Tel Aviv, who has spent the last few nights going from the stairway to bomb shelters and then hearing my relatives in Petaq Tikvah were only streets away from the rocket that took down a residential building, I sit here and feel helpless.

Most of all, I’m completely outraged by the one-sided opinions of media outlets such as NPR, The New York Times, and various celebrities, including Kelly Rowland, Dua Lipa, and Kylie Jenner, to name a few. It seems everyone with a Twitter or Instagram account has become an expert in the Israeli-Palestinian Conflict, and frankly, I’m over it.

I spent the last few nights thinking of ways to combat the blatant media bias, and I decided to put a list together of organizations that can help educate these outlets and people on their bias. If you find yourself struggling to find a meaningful way to help Israel from afar, I suggest learning more and giving to the following organizations. The Jewish people have a right to our indigenous homeland and, most of all, a right to defend Israel.

The organizations listed below all support Israel and work in different ways to educate others about Israel. I urge you to check out each one and look out for the betterment of Israelis and Palestinians impacted by Hamas.

Please note the organizations are listed in no particular order.

Honest Reporting’s sole focus is to expose media bias about Israel quickly and effectively. On a daily basis, the website analyzes the media’s coverage of Israel and responds to the inaccuracies. They have even been running trips to Israel for journalists to help them get the facts on the ground. You can even sign up to receive a daily newsletter that shows you how the media is covering Israel.

The Anti-Defamation League has been fighting hate in all forms, including antisemitism since 1913. The ADL supports a secure Jewish and democratic Israel and has worked for decades on this. One goal of the organization is to “educate and engage on how certain harsh expressions about the Jewish state and Zionism can be antisemitic.” ADL also raises awareness about efforts to delegitimize Israel’s existence.

You can learn more about ADL here and donate here.

The AJC works to impact the key policy issues impacting the Jewish people which include antisemitism, hate, strengthening Israel’s place in the world, and defending democratic values. Their priorities include countering the BDS movement and reversing the UN’s anti-Israel bias. The AJC also works worldwide to expand Israel’s ties with other countries.

AIPAC’s goal is to engage and educate decision-makers in the United States about the bonds that unite the two countries. AIPAC has worked tirelessly to educate and engage members of Congress and those in political offices from both the right and the left. They also lobby Congress on bipartisan legislation that strengthens the U.S.-Israel relationship, ensuring that our leaders understand the issues in advance of weeks like this.

American adolescents and young adults face anti-Israel hatred, bias, and antisemitism daily whether it’s on-campus or through social media. They can be some of the biggest spokespeople for Israel’s right to exist and its safety and security but the Israeli-Palestinian conflict can be hard to digest and most of all defend. Fuel For Truth operates Israel advocacy training and boot camps for young professionals, Jews and non-Jews in various cities across the US. The boot camps and Israel education give the next generation the tools they need to understand the conflict and have strategic conversations about it.

Learn more about Fuel For Truth here and donate here.

StandWithUs believes that education is the road to peace and one of the key ways people can stand up for Israel and Jews everywhere. The organization is non-partisan and focuses on Israel education for everyone from middle school to college students and communities across five continents. They even have a digital department dedicated to creating powerful educational content on social media.

Lastly, we need more people to visit Israel, meet Israelis and form their own opinions. The best way to do this is to travel to Israel. Organizations like Birthright Israel Foundation and Masa Israel Journey offer low-cost or free travel options for young Jews to experience Israel for themselves and form bonds with Israelis. Personally, I want other people to see where my family lives in Israel so when our homeland is under attack, they have a personal connection and are better able to put themselves in Israeli shoes and understand what is truly happening.

About the Author
Andria Kaplan Aylyarov is a marketing and social media professional whose career has focused on Israel education and Israel travel programs such as Masa Israel Journey and most recently Birthright Israel Foundation.
Related Topics
Related Posts
Comments