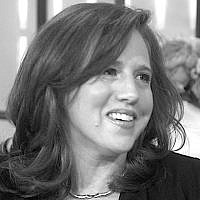 The Blogs
Jordana Horn
Apply for a Blog
Advertisement
Please note that the posts on The Blogs are contributed by third parties. The opinions, facts and any media content in them are presented solely by the authors, and neither The Times of Israel nor its partners assume any responsibility for them. Please contact us in case of abuse. In case of abuse,
Report this post.

Kveller via JTA — I’ve been married twice. Some might think if I failed at it once that means I’m not so good at marriage. Personally, I’d say, like Peppa Pig’s father, that “I’m a bit of an expert.”

I mean, two marriages means two weddings, right? I’m a pro. So let me give you some unsolicited advice as to how to have the best one – yes, ideally one — ever.

As a prerequisite to marriage, the Catholic faith requires a course of premarital counseling set by the church called pre cana. No equivalent really exists in Judaism, but I did appreciate it very much when our rabbi offered an opportunity to sit and meet with him a few times to discuss how we wanted our lives to look as a married couple. (I would also love to go back in time and see what we said, since I am sure we didn’t really think we would have six kids, but that’s another story.) Ask your rabbi if you can do the same. It’s a good way to talk about things you may not have already discussed, like how religious you want your life to be, how you want to raise any kids, how you want to handle money and so forth.

2. Get a genetic screening.

Here’s another one you may not have discussed: genetic screening. Before marrying, get tested for Jewish genetic diseases! Most people get reassuring results, but even if you both test positive as carriers, there are options to help you have healthy children. The national nonprofit JScreen offers those with Jewish lineage subsidized testing for more than 200 genetic diseases. Their testing is meant for anyone with Ashkenazi, Sephardic or Mizrahi backgrounds, as well as interfaith couples.

You can do the test at home. After registering online, you just spit in the container JScreen sends you and FedEx it away in their prepaid mailer. While genetic testing can be expensive, JScreen has a set fee of $149 for people with medical insurance. It’s super common to be a carrier for some kind of genetic disease: One in three Jews is a healthy carrier. The crazy part is you have no idea without testing. So be tested today and get peace of mind.

While I have a rabbi friend who refers to it somewhat pejoratively as an “Aramaic document of acquisition,” I see it as an opportunity to frame your marriage and mutual Jewish future. In the secular world, you may be considering a prenup. As a Conservative Jew, I am a tremendous advocate of the Lieberman clause, in which both parties to the marriage agree not to withhold a “get” — the Jewish instrument of divorce — should the marriage not hold. Including this clause in your ketubah is a statement on behalf of women’s rights. There are many websites with ketubah options. Personally, I like the great array of options and artists on the surreally named thisisnotaketubah.com.

This often gets lost in all the meetings with the florist, the band, etc. No one is actually going to recall what card stock you used for the thank you notes or how big your centerpieces were. Take time every day to talk about something not wedding-related. You know, like why you like each other, or a movie you saw. If you can, write a letter to your partner (offer them the chance to do the same for you, but this is optional, not mandatory) to be opened on your first, or 10th, anniversary.

On the flip side, if there are warning spots of trouble between you, don’t sweep them under the rug. Talk about the problem. Do you differ on fundamental issues, like whether to send kids to Hebrew school or what you believe, spiritually and politically? If you’ve got concerns, it’s not “just jitters” — and even if it were, this is a litmus test for how you deal with stress (and this is just the good kind of stress). You are going to need to spend the rest of your lives talking to each other when problems arise, so set a good precedent for how you handle things now. If you don’t like the answers, you may need to have a more serious discussion that yes, could include postponing or calling off the wedding. Don’t compromise your future because you already paid for the caterer.

The core of the wedding is the ceremony, not the party (I know — shocking!), so take time to focus on that element. What would make the ceremony more meaningful to you and your partner? When I asked the cantor at our synagogue for traditional wedding music, he gave us a CD of music performed by our synagogue’s band, and I chose a song and sang it with them as I circled my groom. I will never be able to think about that without simultaneously smiling and crying.

Use the kiddush cup your partner’s great-grandfather brought over from Russia, even though you think it’s hideous. Use the tallis the entire family has been married under rather than the floral huppah of your dreams. At the end of the day, you’re not making a wedding for Pinterest — you are making it for your family, past and future. Honor those people.

And, for that matter, honor your guests by making the registry easy to navigate (and easily refundable), the seating comfortable and the food plentiful. Today’s bridal magazines would have you believe “It’s All About You!” It isn’t. And newsflash: It won’t, and shouldn’t, be.

Figure out ways to pay your happiness forward. Write thank yous not only to those who gave you gifts, but to those who are giving their time: your officiant, the photographer. Be kind to everyone. Give your centerpieces to a nursing home or hospital. Donate a portion of your gifts, if they are monetary. Make sure you tell people how thrilled you are that they took the time to come and be with you to celebrate this milestone in your life, and how you hope they will be there for every special day to come.

Wishing you transcendent happiness that will shine more light into the world!

This article was sponsored by and produced in partnership with JScreen, whose goal of making genetic screening as simple, accessible, and affordable as possible has helped couples across the country have healthy babies. To access testing 24/7, request a kit at JScreen.org or gift a JScreen test as a wedding present.