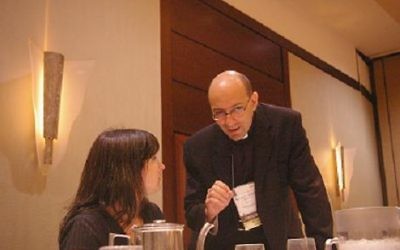 Mitri Raheb is well-known for his tendency to demonize the Jewish state from his position as a Lutheran Pastor in the West Bank.

His 2004 book Bethlehem Besieged is a one-sided account of the early months of the Second Intifada. He talks about the tanks, armored personnel carriers, and helicopters that Israel sent into the West Bank but fails to mention the suicide bombing at the Park Hotel in Netanya that killed thirty Israelis and injured 140 more during a Passover celebration prior to Israel’s decision to enter the West Bank.

Raheb also failed to tell his readers that more than eighty Israelis (mostly civilians) were killed by Palestinian suicide attacks and more than thirty-five civilians were killed by gunfire in the weeks before Operation Defensive Shield. Israel’s decision to go into the West Bank with tanks and armored personnel carriers was a consequence of these attacks that Raheb ignored.

In 2017 Raheb visited Al Aqsa Mosque on the Temple Mount, the scene of regular anti-Israel and anti-Jewish incitement. He told people that his visit was an “unforgettable night … demonstrating faith in the space of Empire and Christian-Muslim unity as a tool of creative resistance.”

This is all pretty irresponsible stuff, but it gets worse. In 2012, Raheb edited and published The Biblical Text in the Context of Occupation: Towards a new hermeneutics of liberation through the nonprofit he runs, the Diyar Institute.

In this book, Raheb writes that his readers “should be careful when talking about the ‘return’ of the Jews, as if they are experiencing something of a homecoming to their original land.”

To buttress his portrayal of Jews as interlopers who really have no connection to the land of Israel, Raheb writes that “many of the Jewish emmigrants (sic) to Palestine were actually not the descendants of those native people who were exiled but mainly the descendants of North African Berber tribes or Eastern European ‘Khasar’ tribes who converted to Judaism. For them, Jerusalem was like Rome to the Catholics.”

You read that right.

Rev. Dr. Mitri Raheb, who received the “Deutscher Medienpreis” (“German Media Award”) in 2012, trafficked in that old lie that modern Jews have no connection to the Jews written about in the Bible by invoking the “Khazar” myth.

Raheb traffics in this thoroughly discredited libel in the name of “peace” as if discrediting the Jewish connection to the land of Israel is going to make life better for the Palestinians. (It isn’t.)

Given Raheb’s history, it should come as no surprise that he trafficked in such an ugly and dishonest lie. What is surprising is that the book in which he promoted this trope was published with the help of Protestants in Germany. The reverse title page of the book states explicitly that it is supported by “The Association of Protestant Churches and Missions in Germany.”

Why did an association of churches working in Germany (of all places!) support the publication of a book that includes such a patently antisemitic libel — that the Jews living in Israel today aren’t connected to the Jews of the Bible and therefore have no legitimate place in the land of Israel?