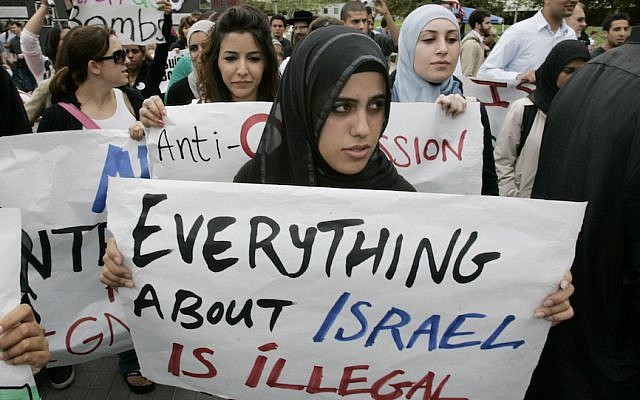 Illustrative: Students protest at an anti-Israel demonstration at the University of California, Irvine. (Mark Boster/Los Angeles Times via Getty Images/JTA)

How can we, Israelis and Jews around the world, learn from other nations’ mistakes, and avoid regressing into militant hostility or civil war. For those who think it hyperbole or overstatement, we need not travel to Ireland or South America or look too far in the past. It was only in the 1940s that Jews attacked each other, a travesty that reached its peak with the Altalena, the ship that almost sank Israel. The question remains, are we heading towards a similar debacle?

Having lived in the US for the past 36 years, I’ve had the chance to follow the rapid breakdown of political consensus in the Jewish community and observe the drift in its support of the State of Israel. I don’t say that Israel doesn’t deserve criticism. Only delusional deadheads believe their State does no wrong, but how far can a Jew go in demonizing Israel before we realize it to be a suicide pact?

Being an Israeli, having fought in its wars, I know its struggle for safe borders and being an American Jew for as long as I have, I am aware of the critical role Israel plays in the well-being of Jews in the diaspora. Yet, with increasing assimilation, we’ve seen our community develop a growing ‘progressive’ ideology, where ideas take hold of people’s hearts and derail imperative commitment to our continued existence. It started with ‘J Street’ and ended with ‘If not now’ — each organization pushing the envelope in pressuring the President, the Congress and Senate, as well as the media to condemn Israel and condition support of the Jewish State to the changing of its policies.

When ‘J Street’ started in 2007, I was not surprised, since the division in our community had reached a critical point. But when ‘If not Now’ took to the streets in 2014, I was shocked by its enmity toward the State. Its protests appeared no different than any hateful antisemitic demonstration, calling for BDS (Boycott, divestment & sanctions against Israel), comparing Israelis to Nazis, calling it an Apartheid racist State and demanding a ‘one State’ solution – which is inevitably going to be Muslim.

These were my people … and I wasn’t sure where my loyalty lay anymore. I live in the US now, but if I were still a soldier in the IDF today, sworn to defend my country and protect it from enemies — what would I do if I were to confront this bunch of diehards, whose slogans and agenda is similar to terrorists who want to destroy my homeland?

There is a legitimate debate about the future of the Jewish State and its relationship to the Palestinian population. We’re strong enough to survive disagreement if we remember that we’re a small nation and still a persecuted people. That without Israel being our backbone, we’ll regress back to the Dark Ages of open antisemitic persecution, which keeps increasing around us. I accept that individual soldiers have the right to voice their frustrations, testifying about hard truths they’d experienced serving in the military. But it’s on the organizational level that we crossed the line.

If ‘J Street’ includes some Modern Orthodox affiliates, ‘If Not Now’ is composed of mostly unaffiliated Jews. Yet, within our own ranks, there are observant Jews who want to bring Israel to its knees.

It was a couple of years ago that I wrote in this very paper critical of some members who extended their criticism of Israel to quote B’Tselem, an Israeli leftist, ultra-secularist NGO, in their condemnation of Israel. (The piece was published in the online edition of the paper.) Their repeated siding with this organization sent a chill down my spine. Besides what some people may believe, B’Tselem is not committed to Israel’s Jewish character or its nationality. It even includes some holocaust deniers (B’Tselem employee, Atef Abu Roub, denied the reality of the Holocaust). What many don’t know is that they supply injurious information directly to Israel’s enemies, some of which has been obtained illegally and, much of which, includes plain propaganda material. Pictures & videos, often cooked in Palestinian studios, are sent to media outlets that attack Israel daily; B’Tselem head executive, Hagai El-Ad, speaks at the UN, calling Israel an Apartheid State, and they confer with Palestinian Authority officials, trying to find ways to weaken the Jewish State.

Some friends thought I went too far: ‘C’mon, these are Jews who just disagree with Israel’s policy.’ I saw no point in arguing, but last week the truth finally came out.

The headline in Israel Hayom, the Algemeiner’s and other news outlets read: “B’Tselem is Helping the ICC (International Criminal Court) Target Israel.” The New York Times printed: ‘Hague Prosecutor Ready to Investigate Israel,’ and quotes B’Tselem executive: “Israel’s attempt to whitewash its crimes must not be allowed to stop international legal efforts to, at long last, hold it to account.” To make it clear, we’re talking about singling out Israel to investigate it for Human Rights violations. A process that could cripple Israel, which remains in a state of ongoing war.

These stories uncover frightening facts: “In 2019, B’Tselem received a grant from the Swedish Diakonia organization, earmarked for an ‘examination of (Israel’s) court’s rulings about violations of Palestinian human rights.’” Other grants for similar work were given to B’tselem by the Government of the Netherlands, Switzerland and other world players who try to weaken Israel. According to a probe by the watchdog NGO Monitor, some of the grants were specifically issued for activity involving the International Criminal Court in The Hague. Along B’Tselem, similar grants were given to terrorist organizations such as ‘Adamir,’ two of whose employees were involved in the murder of seventeen-year-old Israeli teen, Rina Shnerb.

These findings place B’tselem outside our political consensus, and they should be grouped with other anti-Israeli factions such as Neturei Karta and the Satmar Chasidim sect, whose members meet regularly with Iran’s Supreme Leaders and other enemies of Israel.

The question is, why? Why do Jews and Israelis go outside the political system and try to impose their views on the democratic state of Israel? The answer lies in their refusal to accept political and democratic institutions. This phenomenon precedes Netanyahu, who many blame for these ills. Their political wing, Meretz, having decreased to four seats, from the twelve they had a few years ago, decided that their political fight to affect the Jewish State’s character was not sufficient, thus they crossed the line and tried to turn Israel into a pariah state in hopes that it will capitulate to their views. This is not acceptable.

I remember when life in Israel was crippled by boycotts. The Arab league used its oil influence to deter countries and companies from doing business with Israel. We’ve gained a lot of ground since, but if we let these organization harm Israel, it’ll be only matter of time before we return to those sad days, while Iran, its satellite terrorist organizations and other players try to destroy the Jewish State.

My goal is not to attack progressive liberalism or to justify Israel’s policies. Each of us bears the responsibility to examine policies and develop responsible political views. I believe in debate and in democratic institutions, even if they take time to cut through corruption and political manipulations. I want my children to grow and trust our democracy as well. If we still call ourselves Zionists; if we see Israel as the center of our Jewish identity and if we wish to pass along this legacy to our kids, so they stand a chance to defend such views in hostile colleges across the nation, we must draw a line. As a community we cannot let anti-democratic, anti-Israel destructive forces exist within our walls.

I often wondered if there is a marker to identify when a society breaks down, its faction no longer able to work together and ends up in growing, often militant, conflict. If we want to avoid such escalation, I believe we must set limits on how far people can go in self-destructive behavior.

It may be a long struggle, it may sound extreme, difficult and unpopular, but we should point to the danger. This is the first step.