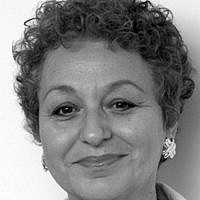 The Blogs
Judith Gottdiener Gabor
Apply for a Blog
Please note that the posts on The Blogs are contributed by third parties. The opinions, facts and any media content in them are presented solely by the authors, and neither The Times of Israel nor its partners assume any responsibility for them. Please contact us in case of abuse. In case of abuse,
Report this post.

The meeting was scheduled for noon on the third day of Hanukkah in the year of the Covid pandemic. It had been a very hard year and the outlook was not promising as the second wave of the virus was causing even more devastation than the first. But, like the story I’m about to tell, there was hope, a vaccine was being shipped around the world as I was anxiously awaiting the magic hour of 12 noon.

I had scheduled another meeting before the noon meeting to see our local family as Zoom and other technology was the only way we would be gathering this year. With kids away at school in various cities and our tiny family spread across the world, technology was key.

Our family was devastated by the 1940s and we had always assumed that a large circle of cousins and aunts and uncles were people others had, never us. When I was very young, people would ask me about my grandparents as most of the kids in my class talked lovingly about theirs. I had no idea what that would be like and had a ready answer. “I don’t miss something I’ve never had”. To me, missing grandparents seemed like missing a third arm.

As I grew older and met kids with large extended families, I understood what an intact family would mean and I began to wish I too had a large network of family. I married into a  family who took the existence of their massive network of relations as natural. I was amazed at how having a big family could be taken for granted, not understanding the dynamics. In our tight little group, we each treasured the others and supported and celebrated each other as brothers and sisters.

When I was in grad school, the internet became a part of daily life along with the many websites that now had an international reach. Jewish Gen was one of them. In 1995, while trying not to be working on my masters’ thesis, Jewish Gen appeared in my searches. I put all of the family names in and then promptly forgot about it, expecting nothing to happen.

The next day, as I went to my email, there was an unknown name. Now, this was pre-spam, so I was intrigued. It was late in the evening and I still had lots to do, so I was anxious to take a glance and go. It was likely a new contact who wanted something to do with my research at school.

I opened the email and there it was, the note that would change the rest of my life.

I could not believe what I was seeing. Someone in New York City had my grandmother’s name on a chart with all of her family and my grandfather’s name along with innumerable other relatives. If I had not been sitting securely, I might have fallen, I was shocked. My husband came running to see what the shouting was about. He, of the large family, understood and celebrated the unknown researcher’s work. I was speechless. Suddenly I had roots, I had names and I had someone else who cared enough to research this.

That email opened a new time in my family’s life. We have met and become close to a small portion of our new-found family and as each one arrived, they instantly felt like family. I see physical traits and values in them that I recognize as part of my late dad. I hear life philosophy that was exactly my dad’s and I see patterns in them that are very familiar from our tiny original family. Of course, many of these are ancient values and are part of our common heritage, but some characteristics are particular to our family history.

But let’s get back to Hanukkah’s third day in 2020. During Covid, Zoom and Zooming have entered the common understanding of the world and are routinely used for meetings with business and private groups. No need for anything other than an internet connection and a phone or computer to meet with people in diverse locations for basically no cost at all. This one application is likely responsible for the mental health of untold millions while we are unable to travel to meet with clients, associates, friends, or family.

Promptly, just before 12, I opened Zoom and saw my son, our local Zoom whiz online, making sure all was working. I felt like I was about to sit an exam. My dream has always been to fill a good-sized room with family. Would the long list of emails that our researcher cousin had sent out bring anyone online?

If they came, who would these people be? Would they be people I’d want to know? Would they accept us as family although our roots come from our great grandfathers? And what are their stories, how had they come to live the lives they were living? We were all simply names on a very complex family tree. Being naturally a fan of simplicity, I personally found the research fascinating but could not imagine who the actual people might be.

Suddenly a stranger appeared onscreen.  I introduced myself and Jim from California began to speak. As he was speaking, many other faces began to appear. My laptop screen was full and I clicked on the arrow indicating a second page, it too was full. One by one, we introduced ourselves and our families and discovered that we were from every corner of America, Sweden, Israel, and Canada. No one interrupted anyone, no one left early, but new faces continued to appear. There was a gentleness, a caring, and interest in each other than I had not anticipated. A group of strangers who had been spread by the winds of history throughout the world, sat together at our virtual table, celebrating being family. After an hour, we said our goodbyes. My heart was full and happy tears flowed.

Since then, there have been many more requests for family trees, Facebook, and LinkedIn connections and calls between those of us who knew each other initially. For an hour, there was no pandemic and no outside world to distract us. For an hour we were not strangers but long -lost family, for an hour, time stood still and we reconstituted a family that had not been together since 1880. In an hour, our lives were forever changed by our 2020 Hanukah miracle.

About the Author
Judith is a resilience expert who lectures and coaches people to live their best lives. She is a mom and stepmom of 5 and has taught children and adults of all ages. Her interest in resilience was the catalyst for her PhD work on work life resilience.
Related Topics
Related Posts
Comments