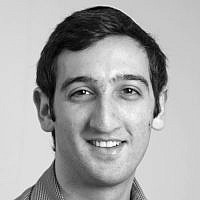 The Blogs
Gavriel Novick
Apply for a Blog
Advertisement
Please note that the posts on The Blogs are contributed by third parties. The opinions, facts and any media content in them are presented solely by the authors, and neither The Times of Israel nor its partners assume any responsibility for them. Please contact us in case of abuse. In case of abuse,
Report this post.

As we began preparing our quarterly report, I felt the need to reflect on my first 3three months working with NCSY Israel. I started the position in September and since then I have been meeting with teens, parents, board members and staff to learn more about the organization and our accomplishments. I have experienced both regional and local chapter events firsthand. And from it all, I have been utterly amazed.

NCSY is an international youth movement dedicated to connecting and inspiring Jewish teens towards passionate religious Judaism. The movement was not foreign to me when I began with NCSY Israel. In fact, it was a significant part of my high school years. I was a member of my local chapter board and remember the strong inspiration and motivation I received from my experiences there. I made my first siyum (completion) of a book of gemara in my senior year at an NCSY Shabbat oneg and credit a large part of my Torah learning towards NCSY. I made Aliyah after college and never thought that NCSY would re-enter my life in Israel. But after finishing a master’s degree, I was offered a job at the relatively new NCSY Israel region. As a “young” region, now in its fifth year, there is a lot of room for growth and development. Yet it has also been incredible to see what has been accomplished so far.

I would like to share some of the amazing experiences I have witnessed in just the past 3 months. I recently attended NCSY Israel’s regional shabbaton in Ein Gedi. On the bus to the shabbaton, I sat quietly in my seat (with my 11 month old) with energetic Israeli teens surrounding me. Some had brought their own Bluetooth speakers and were blasting their favorite songs while singing along. One had brought a (American) football which he was throwing around. All this commotion taking place while driving the winding mountain road to Ein Gedi might have made someone a bit uneasy, to say the least. I want to contrast that rowdy bus scene to a second scene just one day later on the shabbaton. The setting is now an outdoor plaza overlooking the Dead Sea. The sun is slowly descending as Shabbat is coming to a close and those same teens are gathered in concentric circles singing “shirei neshama” and listening to messages of empowerment. There was a sense of calm and meaning. It was powerful to see how the same teenagers who were so rambunctious on the bus were now tuned in to the powerful and serious moment encouraging them to think more deeply about their lives.

It is amazing to witness the Jewish connection and passion that grows within teens at NCSY, and those scenes were just a glimpse into that reality. But there is an added dimension to NCSY in Israel. Beyond helping teens find their Jewish identity and inspiration, NCSY Israel helps teen Olim find their place, when they may often feel out of place. NCSY Israel helps Anglo teenagers in Israel integrate into a new society, culture and language. It is incredible to hear the stories of parents who credit their sons’ choice to attend a hesder yeshiva (which combines Torah learning and army service) to NCSY Israel. Or to hear of the teenage girl who came to NCSY barely speaking Hebrew and is now completing her national service in an Israeli gan on a kibbutz in the North. NCSY Israel doesn’t just create passionate religious Jews, they create passionate religious and committed Israeli citizens who are proud to serve their country.

I invite you to learn more about NCSY Israel and be inspired the same way I have been. Join us at an event and see for yourself. Partner with us by supporting our programs which connect teen Olim to meaningful passionate Judaism and Zionism. Help inspire the Jewish future in the land of our future.