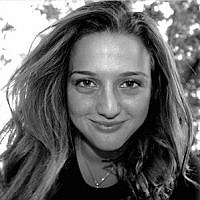 The Blogs
Tiffany Monastyrsky
Apply for a Blog
Advertisement
Please note that the posts on The Blogs are contributed by third parties. The opinions, facts and any media content in them are presented solely by the authors, and neither The Times of Israel nor its partners assume any responsibility for them. Please contact us in case of abuse. In case of abuse,
Report this post.

On Sunday morning as the sun slowly came up two souls became one for the first time in 35 years under a chuppah. The chuppah that was denied to them in Soviet Russia in 1980 – they willingly chose to have in 2015.

The socialist Russia my parents grew up in was a world that tried to suck the Jews of anything Jewish left in them, even after surviving the evils of the Holocaust. The only thing that remained Jewish was the five letter word on every Russians passport that reminded them of who they were after all – еврей (jew). Twenty-six years ago, my parents packed up their bags and embarked on a journey they only heard dreams about. Jews began to flee to the land of golden opportunity.

There were clothes, pots, pans, blankets, fur coats, jewelry and life that they brought from their Motherland — a massive Russian identity they desperately and courageously carried with them. They brought their deepest ideals with them of always to keep pushing, to keep fighting, that life could always be better. They knew that whatever sacrifices and struggles were going to come their way, it would all be worth it in the end.

Asking my parents now, they only had one goal in mind: a better life for their children. What many parents including my own didn’t realize is that among these Russian roots that they carried over with them into the New York streets, were even deeper roots – deeper then they could ever imagine and they were Jewish. Four thousand years deep and eternal. The latter identity although small and subtle – completely defined their future generations without realizing.

They raised their children in a foreign land making sure we knew that we were not only Russian, but Jewish too. Knowing did not come with pride. Jewish was just something that was always stuck with them and their ancestors for as long as they could remember. With all the struggles they had to face of not knowing the language or culture in this enormous melting pot, the tables began to turn. With or without their liking my Russian identity began to shrink and my Jewish one grew larger and larger. The more I discovered what my Jewish identity had in store, I started to resent where my family came from, a place that seemed to strip them of the deepest secrets of their legacy. I was frustrated that my parents had no idea what the holidays were, the holy language, Shabbat, koshrut or the generations that kept this birthright before them. They didn’t know about this world, so I began to push the world they brought with them away. There was a massive rift in the lineage of Torah keeping Jews to where they stood today and it didn’t seem fair to me. It wasn’t fair to them either.

Fast forward 26 years: something no parent could predict – having both children travel not back to Odessa, not back to their motherland, but their homeland – called Israel. A homeland they had no idea they had. Their own children coming back and explaining to them they have found the Jews’ true home. Conversation after conversation explaining to them how this has been the home of the Jews for over 2,000 years and that they still have the right of return if they ever choose to.

Being the firstborn in my family in America, I existed to bring all their dreams into fruition. The dreams of endless opportunity they dreamt for my sister and I — strengthening our Jewish identity had never been on that list. After spending a year and a half learning in Israel, diving deep into the Jewish identity they never sang or danced about, I fell in love with a foreign world that felt deeply familiar. My sister embraced her Jewish roots before I was old enough to, then I followed in her footsteps and took them further by becoming Torah observant.

As time went on, I realized my Russian roots are not the burden I thought they were. They bring me home to a place that reminds me where my parents fought to come from. It is a culture that seems to be rough on the outside – but deep down it is a culture filled with so much laughter, love, and joy. Now, I realize I am a little bit of everything and it’s okay. My native tongue is Russian, my jokes are English, and my soul is Hebrew.

My future children will not have to face this incredible dichotomy – but they should be proud of the courage my parents had. To embrace life with all they’ve got and go. Following the most ancient words that G-d said to our forefather – Lech Lecha (Go). Avraham, the first monotheist, was an ivri, on the other side of the river. He was different from the world he was brought up in and the world that surrounded him. Secretly, this is what the Jew remained, no matter what, in Soviet Russia, always on the other side of that river – never being able to blend in completely. I was told story after story of how they were always countlessly reminded of who they really were. When they were dreaming of a better life for their children I know they weren’t dreaming for us to become more “Jewish.” They definitely weren’t dreaming it for themselves either.

This Sunday, my parents became a little bit more Jewish. They signed up for the chuppah, ketubah, and sheva brachot, rewriting the history of the wandering Jew who had come running from the Red Iron Curtain. The ketubah proclaimed “according to the law of Moses and Israel.” These words relinking them to the laws that came from G-d, who was ever so hidden in Soviet life. Our sages tell us that deceased parents, grandparents and ancestors of the chatan (groom) and kallah (bride) come from their heavenly abode to watch the ceremony. All those generations of souls that seem to have unlinked somewhere from Torah observance find their mending as they come down and attend a chuppah of the past that so beautifully recreates the future. My parents have chosen to rewrite themselves in the legacy of the Jewish people. In the same light, I embrace the culture my parents brought with them.

Today, these two identities dance a fine cha-cha together – sometimes my Jewish foot comes first, sometimes my Russian. Embracing both in the fine dance through life. Maybe this is not the better life they had in mind, but their souls did. A better life is a proud Jewish life. This is what we will carry on forever. The Jew is proven to be redefined yet again, not surviving — but thriving.

Their chuppah, happening between the highest and holiest holidays, resonates deep with the theme of this month. Teshuva — the returning to G-d. Deeper than returning to G-d is to return to the G-dliness within yourself. This chuppah returns my parents back to their souls — their parts of G-d inside themselves individually uniting as one. Thirty-five years later and its still not too late.

Here’s to beginnings being rewritten. For the right of all Jews to return to their heritage that is so uniquely theirs. Mazal tov to the two most important people in my life.

About the Author
Tiffany is a baalat teshuva trying to live the delicate balance between the ancient words of Torah and life in the concrete jungle as a masters student at Yeshiva University. She has a deep love for Israel, for the Jewish people, and for the complexity and beauty of words.
Related Topics
Related Posts
Tiffany Monastyrsky
Comments