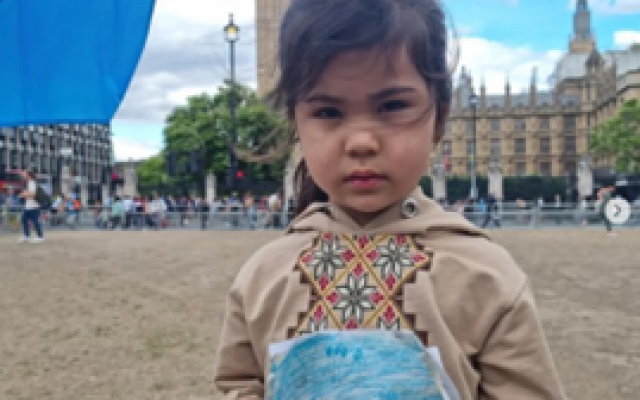 Girl with her drawing she made for the protest (see instagram uyghurs_uk) UK Uyghur Association https://www.instagram.com/p/Cfq09q8MPAB/?igshid=MDJmNzVkMjY=

“Allah, can you please help us to get away China from us.”

She was only little.

I thought the picture she had drawn was the sky.

It was, however, the symbol of the ancestral homeland she’d never seen.

As the peer, Lord David Alton, left Parliament Square Gardens, he asked her, “How old are you?”

Below the picture, she had written (sic), “Allah, can you please help us to get away China from us.”

‘Mi Pi Olalim ve Yonkim’ (Out of the mouths of babes and sucklings) (Psalm 8;3).

We were at a demonstration, commemorating the 2009 massacre of peaceful Uygur demonstrators, in their capital city, Urumqi, who had been protesting 60 years of racial discrimination in housing, employment and education, during which they had endured periodic religious suppression. No one knows how many thousands died, nor how many boys and men, uploaded onto trucks, ‘disappeared’. From then on, discrimination by the Chinese Government, began to morph into the Genocide we were now protesting.

I reflected that I had stood two and a half years ago, in front of the Chinese Embassy, telling a crowd that the Jewish community stood with them.

Now, it was even truer, for since then the late and current Chief Rabbis, Lord Jonathan Sacks and Ephraim Mirvis, the Board of Deputies of British Jews, the “Jewish News”, and in particular, the UN accredited human rights organization, Renee Cassin (the “Jewish voice for human rights”) had campaigned strongly for the Uyghurs. Not only because of the echoes of our own Holocaust, but because of our ethical mandate requiring us not to be by-standers (Do not stand by the blood of your neighbor; Leviticus 19.16), as others were bystanders when we faced Genocide.

We Jews understand Memorial Days. Starting this weekend, we will our own memorial days relating to the destruction of our Temple, which proved to be a staging post on our way to Exile, the Crusades, the Pogroms and eventually the Shoah. So, we understand the commemoration of the massacre at Urumqui as a staging post on the way to the Uyghurs’ own Genocide.

The late Chief Rabbi Sacks (1), quoting Rav Soloveitchik, talked of how the Jews were a people in two ways, a ‘Machane’ and an ‘Edah’. ‘Machane’ is an encampment, a defensive formation, people coming together in the face of external threat. ‘Edah’, (from the word ‘Ed’, ‘witness’) is a community, people coming together to fulfill a shared vision, bearing witness to their truth.

I think that is now true of the Uyghurs. Those in the Uyghur diaspora have come together in the face of the threat from China as a ‘Machane’, whilst continuing to bear witness, as an ‘Edah’, to their traditional Muslim faith, fundamental to their culture and way of life.

All they want is that China restores to them

their constitutionally guaranteed freedoms of

So, over the last two and a half years, what have we achieved in the UK, under the leadership of exiled singer and translator, Rahima Mahmut? The battle is incessant. It’s tiring. Spirits can flag.

Well, we can take heart from a ‘baker’s dozen’ (or should I say bar mitzvah?) of 13 achievements.

As I write, the list begins to look a bit like ‘Dayenu’ (‘It was enough for us”) from the Pesach Haggadah! Except it has not been enough, because China has not yet changed its behavior.

This is campaign is clearly marathon, not a sprint.

However, it has had an effect. Sales of Chinese cotton are down 41% due to companies concerns about Uyghur Slave Labour. You dear reader, can make it fall further, by not buying Chinese cotton.

You can do the same for China’s hi-tech industry by not buying from HUAWEI, Dahua, Hikvision and Megvii, because of their critical roles in developing surveillance of Uyghurs. If you want to be really machmir (strict), you can use Jewish World Watch’s Uyghur Forced Labour Database to avoid all products made by Uyghur Slave Labour.

Judaism teaches us to be optimistic and patient. Remember Jacobs’ dream, where angels ascend then descend a ladder between heaven and earth? Ramban (2) (13th Century Spain) summarizes traditional interpretations as referring to the rise and fall of the world’s powers, Media, Persia, Greece and Babylon. Rome rises, but does not fall, whereupon Jacob says, “You too will be brought down.” The Holy One (God) then says, “Though you make your nest as high as the eagle.”

By extrapolation, so will China, “however high they make their nest.” Is it just linguistic co-incidence that the 2008 Beijing Olympic Stadium was called “the bird’s nest”?

Not only the Roman Empire, but the Nazi, Japanese and Soviet Empires came to an end, as did the Apartheid regime. However, if all that happens is that our campaigning causes China to change how it treats the Uyghurs, it will answer the little girl’s prayer to Allah, “please help us to get away China from us,” then………“Dayenu!”

Based on a speech given by the author outside the Chinese Embassy, London, Tuesday July 5, 2022, 12 days before shivah-esar b’tammuz