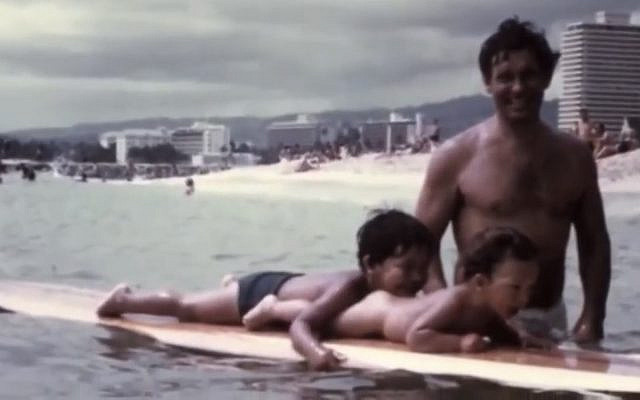 I first stood up on a board in Cape May, New Jersey on a family vacation when I was 13 years old. It was like my entire life had led up to that moment. Thanks to both of my parents, I had been swimming since I was a fetus. I quickly became interested in scuba diving and was certified by age 12. In addition to all my water experience, I would try anything that involved a board. I was a skateboarder, snowboarder, wakeboarder (skurfer, as it was called in those days), and even a water skier. So, when my parents suggested renting a surfboard that summer day, I immediately jumped at the chance.

As I mentioned, I don’t remember my actual first wave, but I know how I felt. It was like everything finally came together. It was like something that had always been calling to me in my subconscious was answered. I got the bug.

The next day I rented the board first thing in the morning and I didn’t touch land until my parents pried me out of the water at sunset. I was so hungry, I proceeded to down more hotdogs than Kobayashi.

Like all beginners, I started in the whitewater, heading straight towards the beach. Everyone who learns to surf must first master how the board works in the water, as it planes along a dynamically changing surface. It’s quite different from riding on land.

The next step is finding the part of the wave that hasn’t yet broken, known as the ‘open face’. The majority of good surfing comes from timing — catching the wave before it breaks, and anticipating its next move, so you can turn on the smooth open canvas. My first open face wave is the one I remember best and I caught it at the only ‘Jewish’ surfing camp of its day. Well, it was a Jewishly owned surf camp, at least.

In my teen years, I was far from an observant Jew. My family and I were regulars at a liberal Conservative synagogue in the suburbs of Philadelphia but all I could think about was getting to California. I saw an ad in Surfer Magazine for the Paskowitz Surf Camp in San Onofre beach. The sales pitch, for me, was you surfed every day, all day. That’s all I needed. I saved as much of my allowance as I could and was able to pay for one week at the camp. Thankfully my parents surprised me with a matching program, and I was able to go for two weeks.

At that time, I had no idea how bad a surfer I was. It wasn’t really my fault. Since I was landlocked all but a few days in the summer, my three years of surfing only amounted to about two weeks of actual water time, accompanied by endless viewings of the feature film Point Break. But I knew the basics. I could paddle, catch a wave, stand up, and ride to the beach.

When I finally arrived at the camp, I grabbed a board and paddled to the outside, past where the waves were breaking. When a good wave came my way, I did what I always had done, started paddling towards the beach. But as luck would have it, for the first time in my life, I caught the wave in the perfect spot. When I stood up, I looked to my right, only to see a sight that I would constantly search for for the next 30 years. The wave was perfect. There wasn’t a drop of water out of place. And I was right where I was supposed to be. I stood up and started tracking along the wave’s open face. The sun lit up the surface of the water, giving it a golden tint. It felt like I was flying. I immediately knew that this is what surfing was all about.

When I stepped on to the beach, I was still beaming from my first real wave. The owner of the camp, and grandfather of the family, Dorian “Doc” Paskowitz, casually remarked to me, “That was a good ride you had.” I was over the moon. The only thing that makes a great ride better is when someone sees it. It felt like the best moment of my life, to date.

One evening, as my first week in California was coming to a close, one of the councilors came to my tent and said that Doc wanted to see me in his caravan. This seemed highly unusual, since it hadn’t happened any other night, but I was a good camper, so I compiled without hesitation. I couldn’t figure out why the Doc wanted to see me. Could it be that ride he saw? Did he want to give me a trophy? I felt like I deserved it.

There were a number of us crowded in Doc’s camper when someone smacked a kippah on my head. I was lost. Without explanation, Doc launched into the blessing over the candles and then the Kiddush. It was Friday night.

Although he wouldn’t have described himself as an observant Jew, Doc, due to his sentiments on the Holocaust, both performed these rituals on Shabbat and donned Teffilin daily.

I didn’t realize it at the time, but that first wave, matched with my first independent ritual observance, planted a seed which would later blossom to be the Jew I am today — the one who is both committed to his Judaism and life in the ocean. On that Shabbat, with those simple acts, Doc taught me that my life as a surfer and my life as a Jew did not have to be separate. This perceived duality is false. I am not a Jew and a surfer, but rather a Jewish surfer.

As it turns out, Doc’s fourth Yahrtzeit is about a month away, yet the memories of my time spent with him and his family often come to mind. Amazingly, I’m far from the only person who owes him a debt of gratitude. He gave this gift to both his Jewish campers and to the Israel surfing community as a whole. Doc is not only known as the grandfather of his family but also the grandfather of surfing in Israel. He was the first person to bring a surfboard here in the 1950s in the hopes of creating a team that would represent Israel in the world championships. And as Anat Lelior just advanced through her heat as the first Israeli on the World Championship Tour, I can’t help but think that Doc must be smiling down on us as only a proud Zayde would.