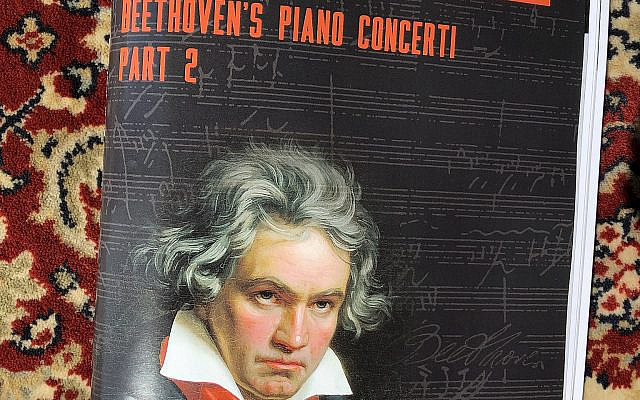 Portrait of Beethoven from program of concert.

Being able to hear all five Beethoven piano concerti played on two successive evenings was a rare treat. This was provided by the Jerusalem Symphony Orchestra, conducted by maestro Steven Sloane, and brought Beethoven’s immense oeuvre in this realm into sharp and impressive perspective.

On the first evening we heard concerti nos. 1, 3 and 4. Each one was played by a different young Israeli soloist, all of whom were amazingly talented and assured, playing with aplomb and grace. On the second, shorter, evening we heard nos. 2 and 5, thus ending with the magnificent last concerto, known as the Emperor. My unprofessional but accustomed ear did not pick up a single false note or tone in any of the performances and, as ever, I went away full of admiration for the amazing and talented young pianists Israel seems able to produce, including one young man who is Palestinian. Those two events were truly inspiring, providing nourishment for the soul and the mind.

Another admirable feature was the fact that two of the soloists were women, and their performances were in no way overshadowed by those of their male colleagues. To play a Beethoven piano concerto requires stamina and fortitude as well as talent, technical ability and application, and all five of the soloists displayed all the requisite characteristics in abundance. To hear Beethoven’s enormous range of power, expressive ability, sensitivity and musicality played with prodigious verve, precision and bravura is an experience not to be forgotten.

Was there a fly in the ointment? Yes, of course there was. This was represented by certain members of the audience. In these Corona times the audience is usually spread out in such a way as to leave an empty seat between people from different households. Although it isn’t always possible to keep to this rule, my husband and I certainly try to do so. Even so, there are always people sitting in the rows in front of us (we usually sit in the last row) and further along in the same row, and it is virtually impossible to avoid seeing what they are doing. Thus, people who insist on bobbing their head around or moving hand or arms to demonstrate their familiarity with the music (and after all, who isn’t acquainted with it?), constitute a constant nuisance and irritation to people like us, who are accustomed to the custom of sitting still in a concert. After all, the conductor does enough head-bobbing and hand-waving to keep the music going without assistance from the audience. Maybe someone should point out to them that the kind of behaviour that is customary in a rock or pop concert is not appropriate for one of classical music.

The latest addition to the litany of disturbances impairing our enjoyment of concerts is the ubiquitous mobile phone. I’m not talking about the people who forget to turn their phone off, so that its sudden ring constitutes a brutal intrusion into the music, disturbing the whole audience, and probably the musicians as well. What I’m referring to are people sitting near us who cannot bear to be parted from the screen of their phone for a single second. Why must one check one’s phone for messages while in a concert? To my mind, the beauty of a live concert lies in the opportunity it provides to focus solely and entirely on the experience of the moment, the live performance of great music, instead of listening to recorded music or even a live performance at home, where there are a million and one distractions.

All the same, the various trivial annoyances are never going to prevent me from benefiting from the pleasure I derive from attending a concert.