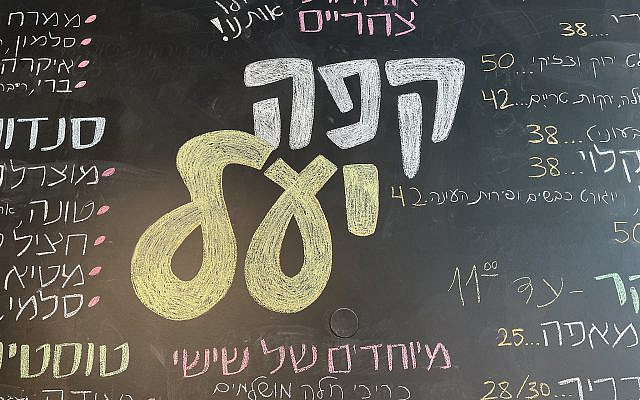 Café Yael is among the last places in Tel Aviv I wish to be writing about.

Don’t mistake my reluctance as disinterest. Fresh enthusiasms are either a) eagerly shared with everyone (in order to augment our joy), or b) jealously kept from anyone (so as not to diffuse it). One’s new favorite tune, now whistled by everyone else, can ebb and pall with fantastic rapidity.

You see, I have found an idyllic afternoon eatery where I can happily carve out a dish and an hour in relative serenity, and one hesitates to disturb the delicate synergy which upholds an all too fragile contentment. Quite naturally I am reluctant to share with the world (you, in other words) the secrets of the fount wherefrom I sip and sup. I really (really, increased by some inordinate quotient) don’t like waiting on lines, and I don’t much enjoy the noises and odors and time-taking and space-filling and air-converting habits of other would-be customers (you, again), either. Few and proud are the places that can claim me as a habitué; I can scarcely afford to make them fewer still (the coronavirus despotism has already made ghosts of too many haunts).

Yael’s has, by now, obtained a certain local renown; Yet the note of that fame echoes, for now, within the breadth of the neighborhood. Not quite the “tranquil haven,” “overlooked gem,” or “quiet nook” — but no bustling boîte, either.

Though there are some portentous stirrings. Fashionable people insist on making a public workspace out of every good café with WiFi (which I suppose makes them online while, as it were, on line). This tends to cramp the atmosphere for his antiquated cousin, the public space book reader. When, therefore, the Web generation makes an entangling gossamer out of the corner café, I Chekov and check out.

The prime and the hale heel over to other vexations. Whenever a space fills with leashes and strollers and canes — the barking, the whining, and the groaning —  it as swiftly empties of 72 grumbling kilograms. Those on four legs, those almost on two legs, and those already on wheels, are perceptibly afoot. I, in consequence, am fleet-footed.

So far, two Yael branches have sprung from the concrete soil, and both bloom fruitfully year-round. Fridays, the restaurants become jammed like preserves. And the abovementioned trends in popularity don’t portend brilliantly for the coming weekdays, either. But you’ll find me hanging at one of the two locations, thrice weekly, for a while yet.

Here follows a list of quick impressions, taking the triple alliance — or kosher trinity — of atmosphere, service, and product as its mark:

Atmosphere. Surfaces clean and lickable. Chairs constructed with the skeletal frame in mind — just not the human one. Tables distanced enough between, with or without nasty pandemic. Most unfortunately located beside a kindergarten (and we know what sort of horrible pygmies romp in those gartens).

Staff. Exhibiting before the indecisive, the persnickety, and the demanding an imperturbable yogic patience. Into their mug of nice is mixed the right number of sugar packets. Sweetened, though not with aspartame. Sunshiny, without the sunburn.

Product. So fresh it rots. Prepped while the sun is rising and meant to be consumed before the end of the solar cycle. If it grows, it’s seasonal.

Not the fruits alone, but the spawn of Gaia’s womb to reap: Not dimmest among the menu’s highlights is the fresh fact of it remaining unchecked by the nutritional constraints of first-world urban Hindus, which is what those whose veganism, having its roots (pun) neither in religion, poverty, or ineluctable circumstance — for instance, a sudden countryside sweep of dire murrain — are. (“Vegan” may denote the exclusion of animal products, but it is undoubtedly the mark of the beast.) If, however, you happen to fashionably follow the flock by not consuming the herd, the menu incorporates dishes “vegan friendly” — one might even say vegan genial, vegan affable, vegan cordial, vegan amiable, and vegan convivial. I remain vegan offstandish. (As it happens, I always took “vegan friendly” to mean that in the event any vegans are found on the premises, they will, considering the circumstances, be civilly treated.)

No burnt chavita for you, but egg salad with caramelized onion and fennel. Not tuna-speckled mayonnaise bisque, but Ortiz on artisan bread with house schug. Not what Israelis describe as “white” or “yellow cheese” (as colorful a description as one needs, thank you), but cheese classed under a proper name, namely Camembert or Brie, between sourdough toast and splodges of homemade marmalade (yellow tomato and thyme; rhubarb and spice; apricot and lavender; pear, vanilla, and brandy). Not ubiquitous “Israeli Salad” (which is, really, just a word shorter than saying “cucumbers and tomatoes”), but an alps of rough-hewn vegetables snow-capped with feta. “Overnite oats” — because over such time will you still be thinking about it. Iced tea is admirably unsweetened. “Specials” always live up to that descriptive. Frittatas, quiches, lasagnas. Lima masabacha. Saniyeh. One such special occasion, having returned to Tel Aviv (the secular dome) from Jerusalem (Holy City of the Dome), I was most surprised to find on the menu Shishbarak, a very old, very traditional, very local, very occasional, very special, and not very kosher Arabic dish.

You want pictures. You need pictures. 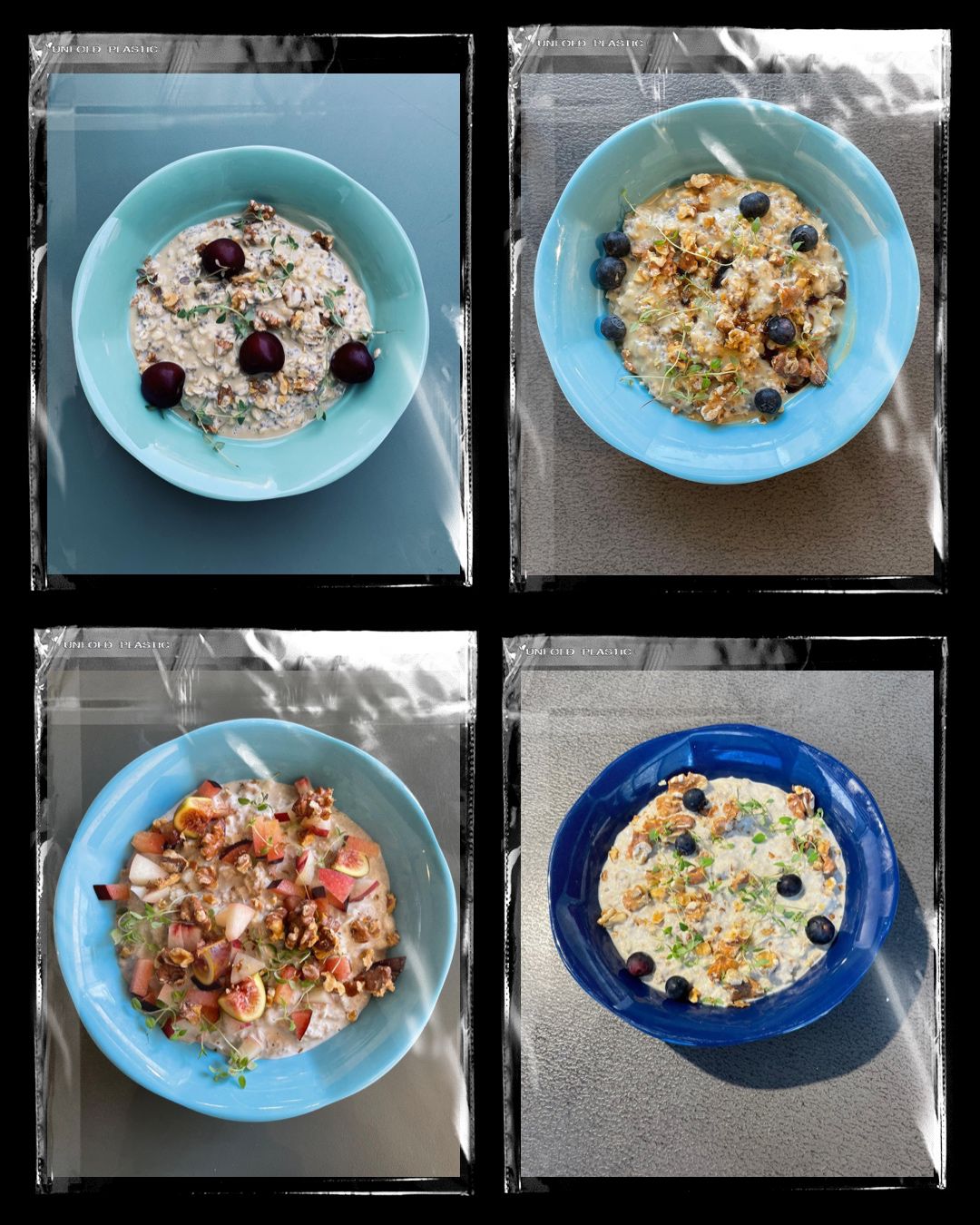 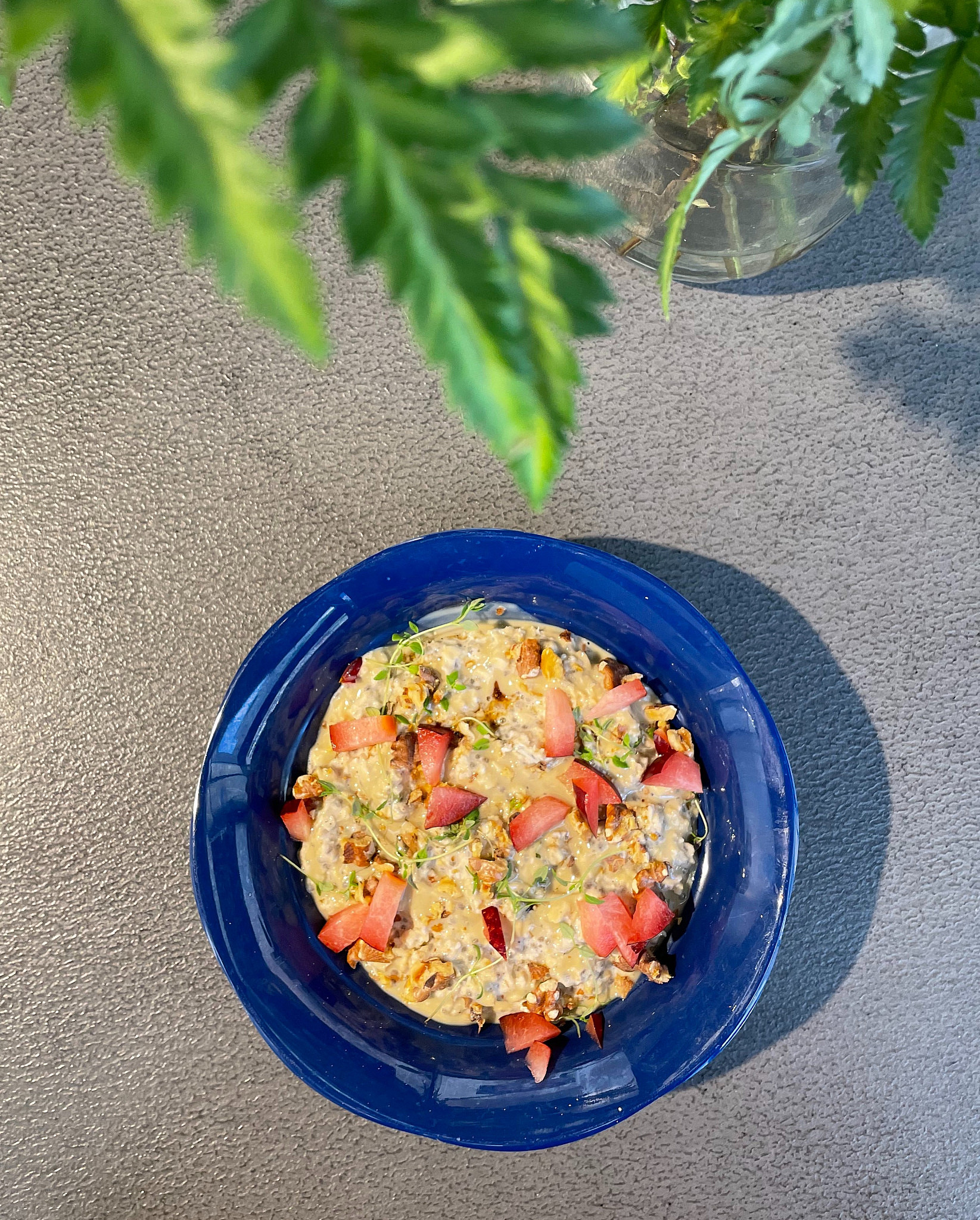 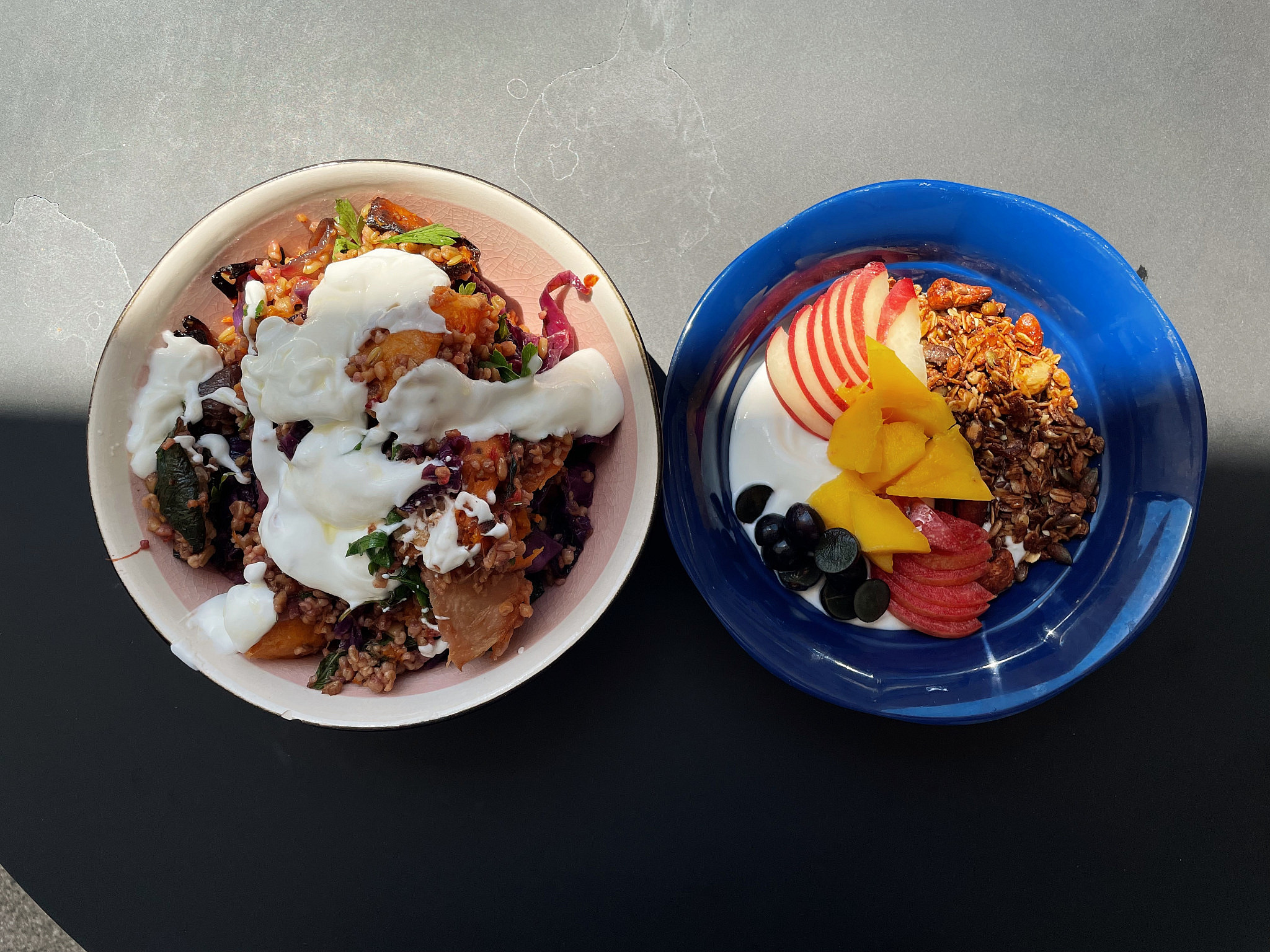 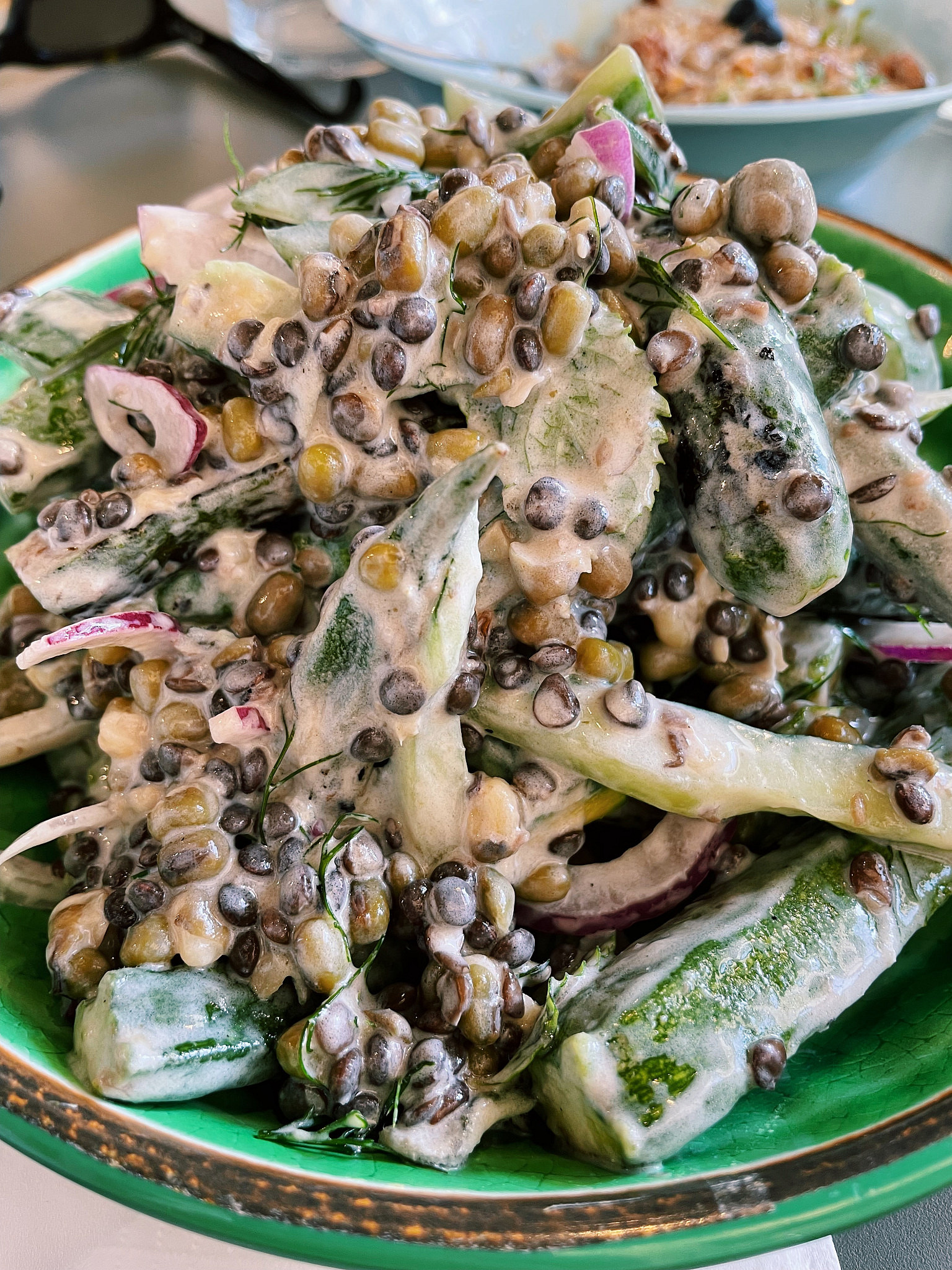 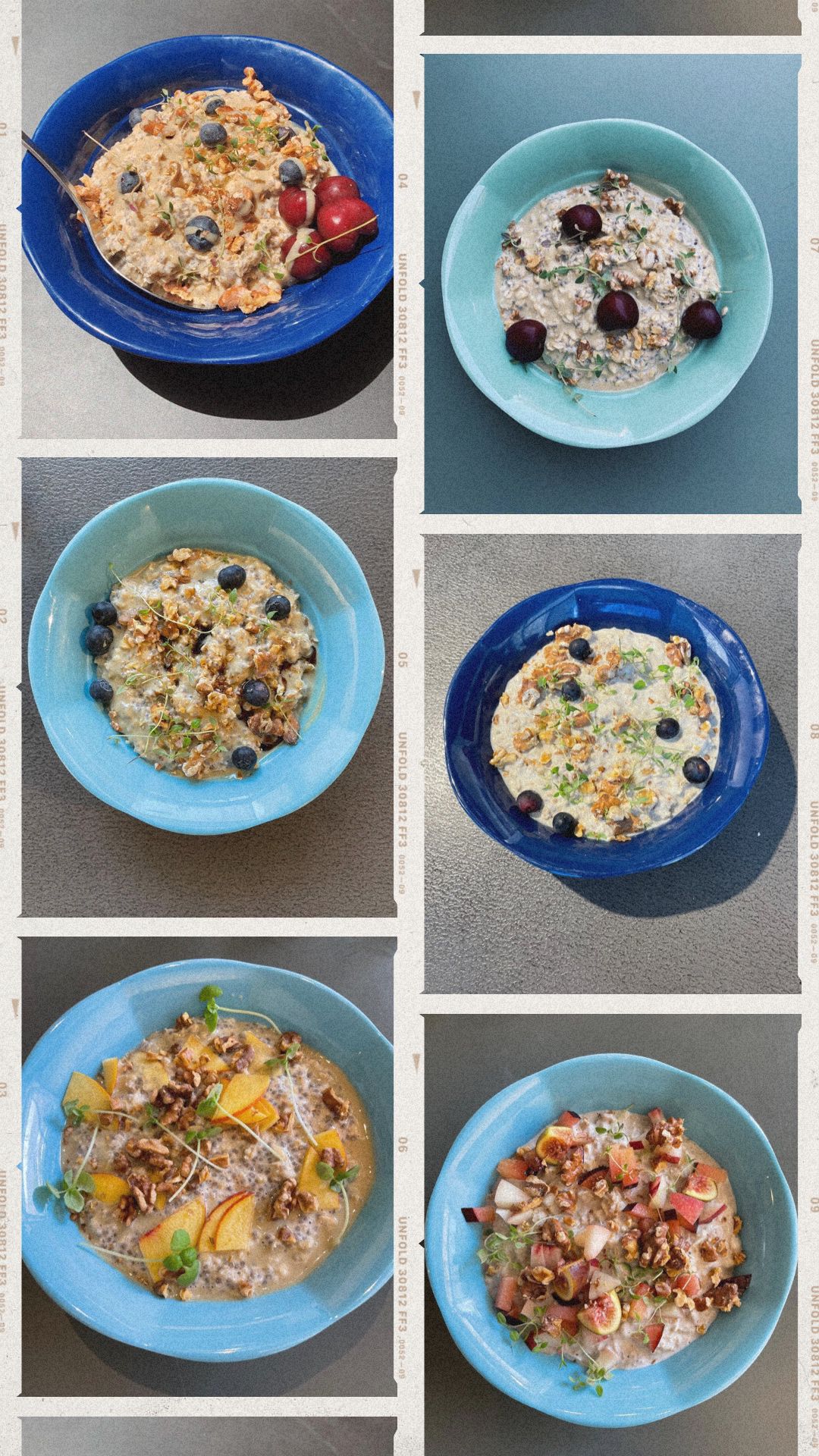 An Ode to Oats. 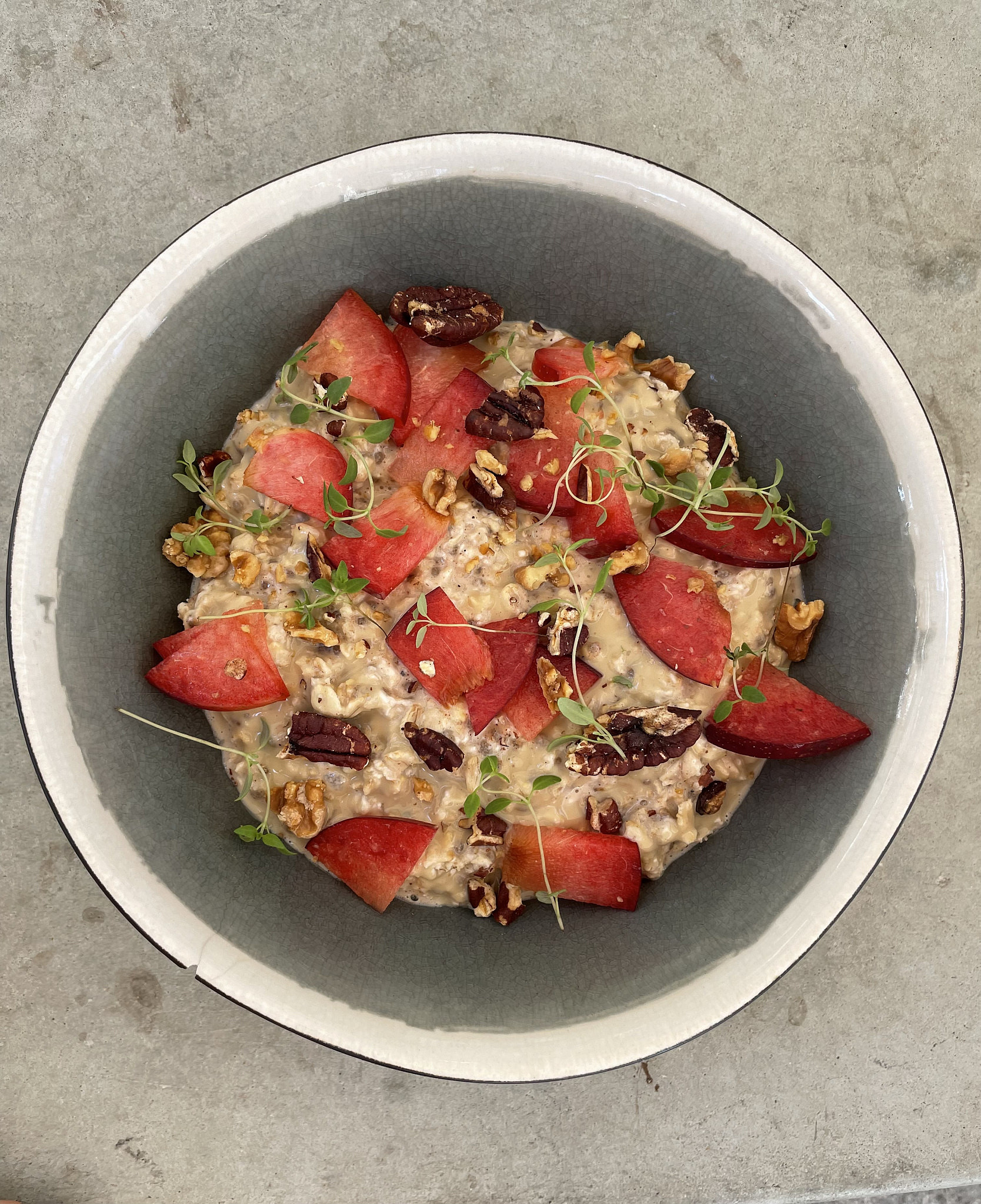 Pardon, or rather thank me, if most of the above are photogenic versions of the same overnight oats. I can’t very well not order this. It has an overwhelming authority over the menu which can’t be denied, and that not only by me. I have for an intimate acquaintance a certain sassy Siberian, a tigress from the Taiga, a Tundra melter, and a fellow sybaritic soul. Knowing not much of American gastronomic approaches, she was initially leery. Introduced to the notion of cold oatmeal, she said, “Cold porridge?” and then emitted some Russian equivalent of the vocable, eww. Today, same as I, she verges on a heart-wholesome, artery-approved addiction.

The one lagging component of this café is the cafe, which is only somewhat ironic. Yael’s is a “café” in the sense of a daytime eatery, its congener more the bistro than the espresso bar. There is all the real difference in the verbal distinction between the café and the beit café, or coffeehouse. I’ve never ordered, nor thought it sensible to do so, a coffee anywhere but from the proud fistful of boutique TLV roasteries (HOC deserves parenthetical mention). A cursory look at the coffee bag with the generic Italian name and I was at once confirmed in this view, understanding that the postprandial ceremony would have to be held elsewhere (i.e., HOC). 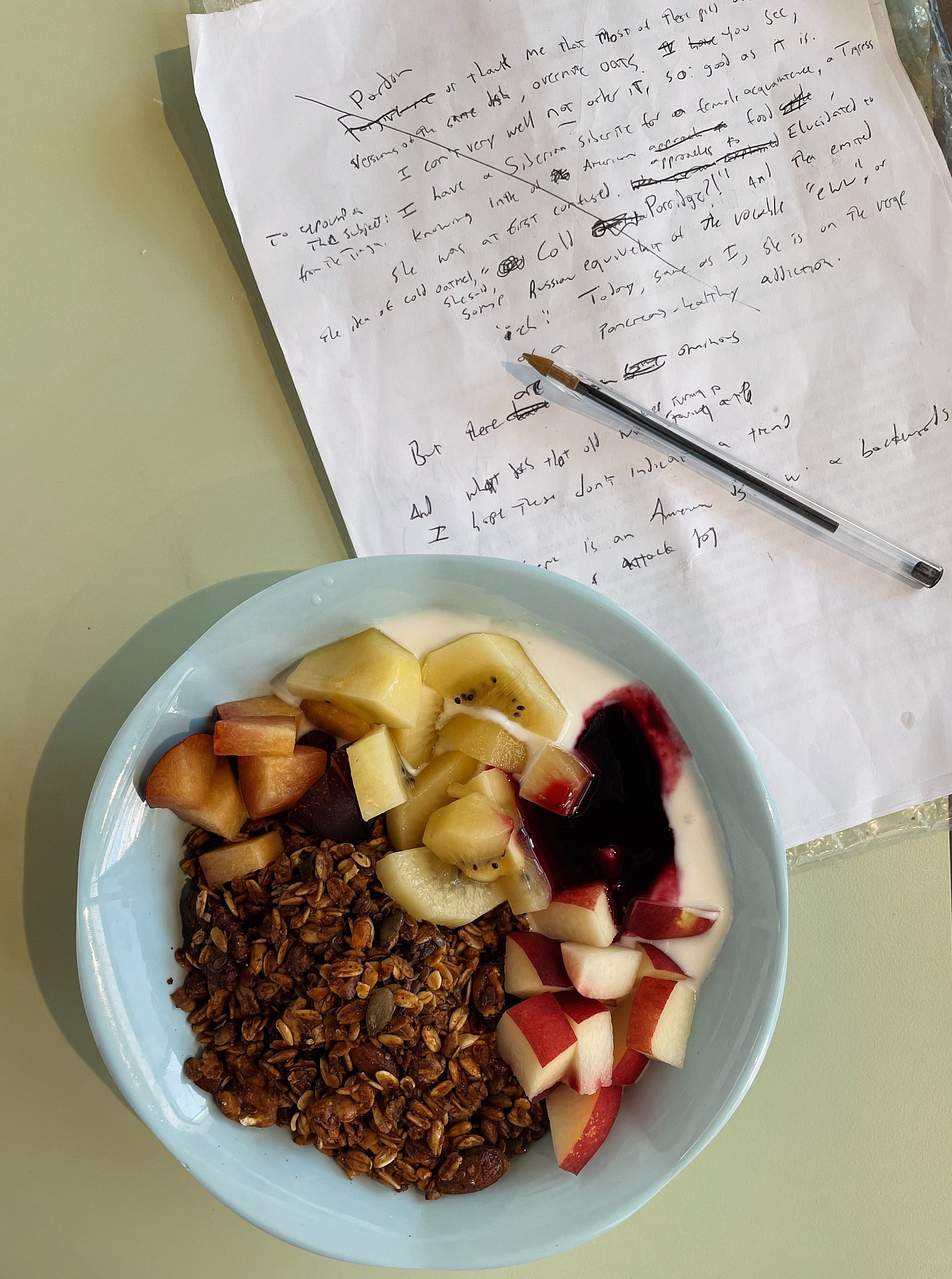 Thyme — don’t we all wish we had more of it.

The small, unexpected addition — a soupçon of saffron, a morceau of marjoram — can add that underlying, numinous element to a dish. It’s the cardamom in the coffee, the hawaij in the qahwe; the salt in the caramel; the St. Germain in the Gin & Tonic. It is, that is, the cause for pause. The tongue stops mid-twirl, and gestates, saying hmm as it says mmm. It’s what causes one to ruminate as he ruminates — the mouth, so to speak, chews it over.

Thyme and oatmeal is, at first, rather like the startling appearance of a familiar guest in the wrong wing of the house. But right things in wrong places, or vice versa, can work to happy effect, and, expelling our traditional or accustomed notions of “right” make us realize they were never wrong to begin with. Vide the deviant application of the most familiar salt (see how a bit of it on your fruit can highlight the sweetness). One eventually comes to see in the visitor a family member, one who was always a part, if an eclectic part, of the family.

Dressing the oats is fashionably in season. As a surprise, the use of non-frozen berries is always, so to speak, fresh. The luxurious addition is especially appreciated by Americans in Israel, where berries are legal tender. (I can tell how much I’m liked that day by counting the blueberries, like so many sapphires, atop my bowl.)

Still, I’m left wishing I had more thyme before I get berried.

A man, a table, a Thonet chair, a newspaper, an espresso; the man at, on, before, and over each of these, respectively.

If “café” once garnered the image of a grandee in the rooster hours taking recurrent nips at a demitasse as he glanced the daily, the word now rallies a range of clashing images to its four-letter banner. Perhaps the term had never had so “strictly speaking” a sense.

Hemingway had his “good café on the place St.-Michel,” where, following a relished rum St. James, succulent oysters were sucked and cut with crisp cold wine, while he endeavored, between affectionate glances toward pretty mondaines, to extort from himself the “one good sentence.” Voltaire chased his 40 cups with chocolate at Le Procope, the surrealists and existentialists were real and recurrent manifestations at Les Deux Magots, and Peter Altenberg had his mail, and his laundry as well, forwarded to the Café Central.

The charm of Tel Aviv is not so Parisian, this feast not so moveable. “Café,” on these fusty streets, conveys nothing so gilded or grandly Venetian.

But to whatever species of café Yael belongs, it represents a progressed step in the Israeli palate’s evolutionary inching toward culinary maturity. Yael’s needn’t be the best, (though it is occasionally great), but it shows Israel what is better. And this is good.

Cherished and beloved figures and objects have, in the tattered phrasing of maudlin romantiques and those who make terrible poets, a “place in the heart.” Yet Yael tenants that true life-organ of man — his gut. Which, as goes the aphorism, is the fastest way to his heart, anyway. Who Yael is, (if such a one exists), I have yet to discover. But (s/)he has my thanks.

If you find a sprig of time in the field of your afternoon, there are few better Tel Aviv cafés in which to root oneself. Evenings are for the liver. But afternoons — passed at Yael’s with a salutary bowl of oats — are, in more than one sense, for the heart. 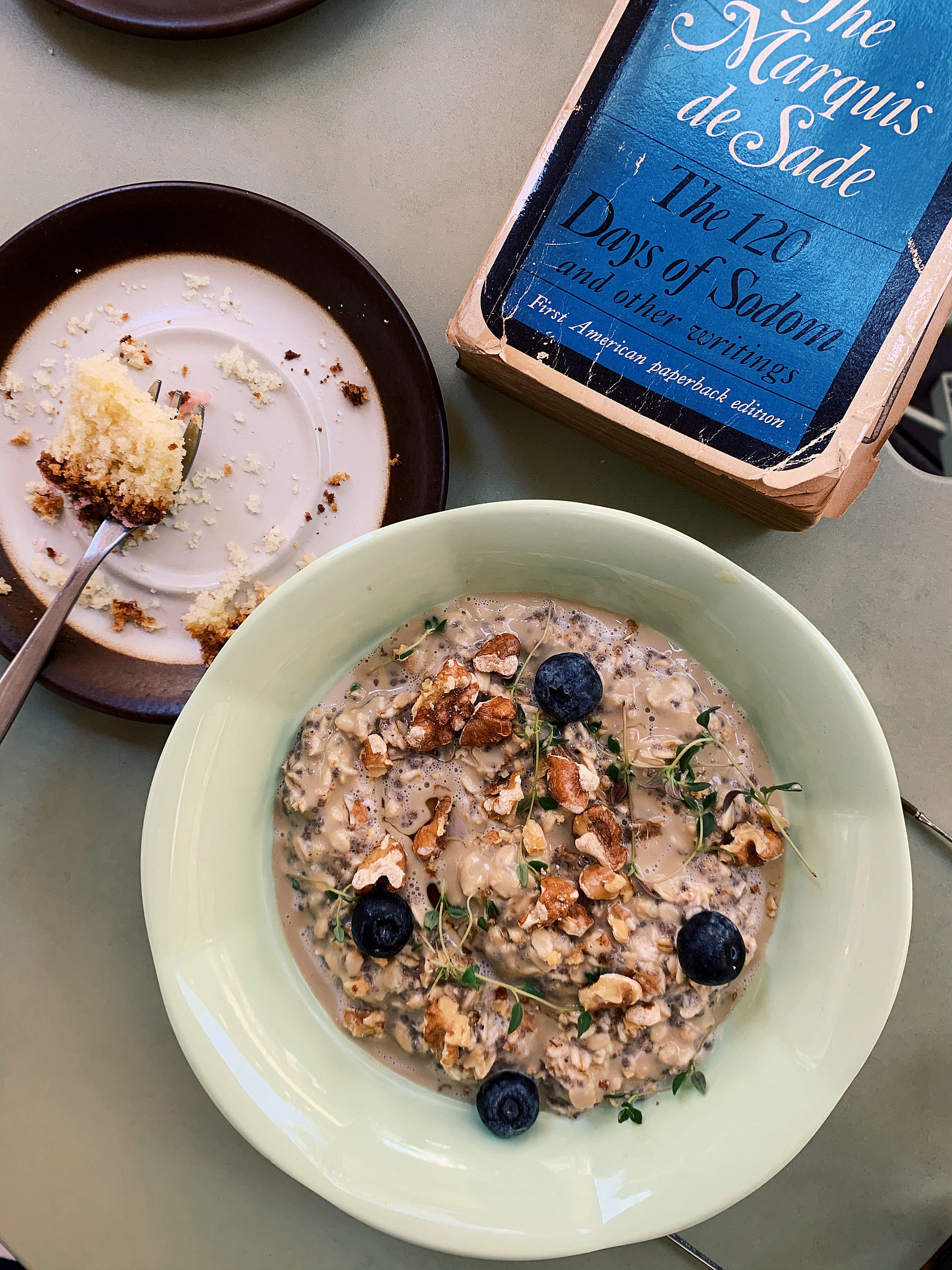