Sukkot is Chag Simchateinu, “the festival of our joy”. But like all Italian Jews, I cannot but think of the horrendous attack at the Rome synagogue, tens of seriously wounded and the murder of a two years old toddler. It was on Shemini Atzeret, the day of the family blessing (when the synagogue is always packed with children – the goal of the Palestinian commando was to kill children). It was 40 years ago today. 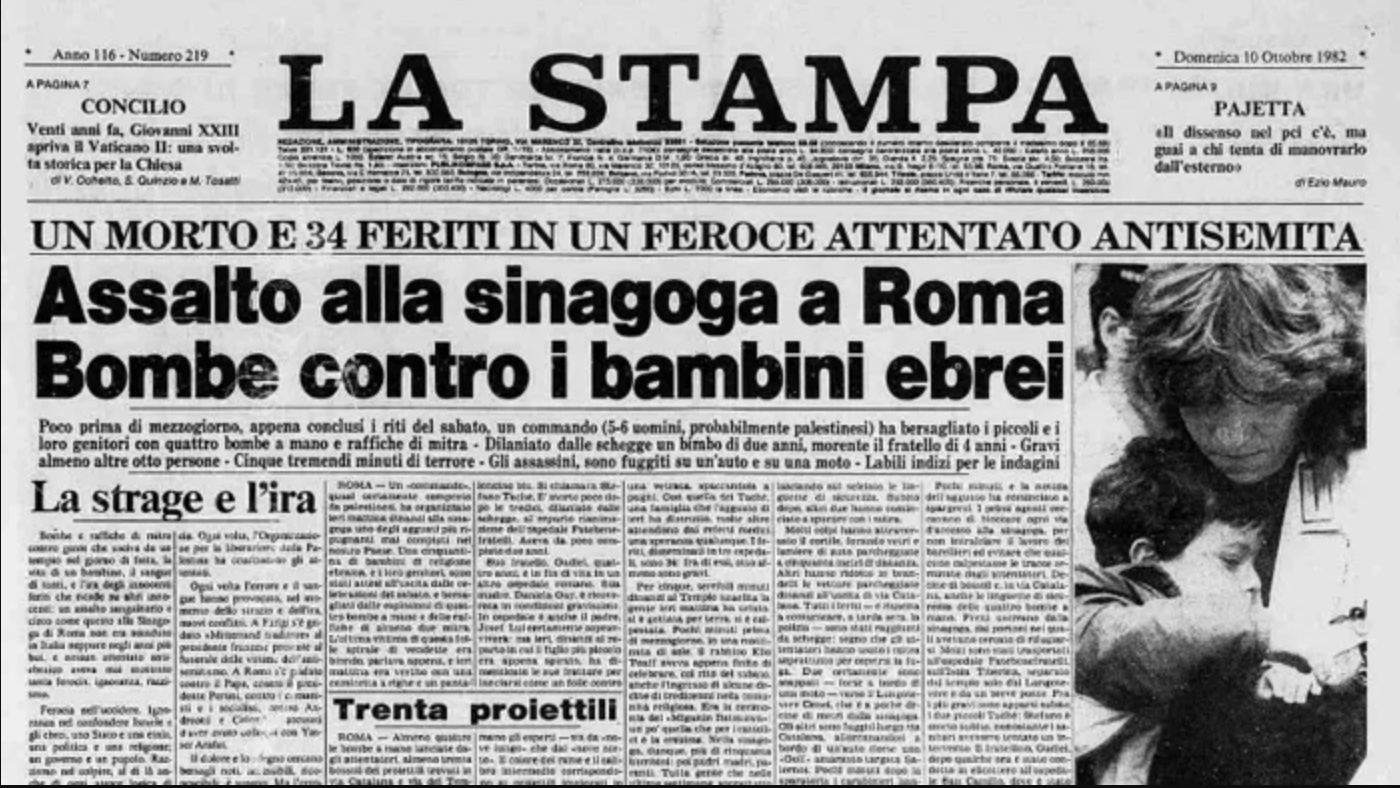 I don’t feel I can judge the terrorists. I was not born in a refugee camp; who knows, perhaps I could have been one of them. We know nothing about them because they escaped.

But I have nothing but contempt for those politicians who shielded the terrorists, who allowed them to walk free around Italy on condition that non-Jewish Italians were not hurt (and called this horror “diplomacy”). Those who sold the Jews and allowed Palestinian terrorist organisations to purchase weapons in exchange for oil. Those who welcomed Yasser Arafat as a Head of State and allowed him to address the Parliament with his gun in full sight (yes, a weapon in a Parliament). The attack was a message to us Jews: condemn Israel, or worse. We were blessed to have great leaders, and nobody obliged.

I have nothing but contempt for those who insinuate, on social media and elsewhere, that the Palestinian murderers were lone wolves (who managed to escape after a terror attack in the centre of Rome); or that they were enemies of the ever-peace-loving Arafat (and no Arab regimes handed them to the police); or even that they were Mossad agents (those evil Jews, they are so addicted to war against the peaceful Palestinians, they kill one of their children to maintain the state of war…)

I extend my contempt to those so-called Progressives who rolled their academic eyes every time I tried to say Kaddish for these victims and then defended those who said Kaddish for Gaza. For those who called me gangster, a sex addict and tweeted about pizza (and worse, all from the anti-Italian repertoire…) because I dare to talk about that terror attack. For those who casually ask, “but everybody in the Jewish community in Rome agreed with their leaders?”. Even there, even in front of the corpse of a toddler, they feel the need to tell the world that antizionism is not antisemitism, to suggest that Palestinian murderers may have the reason on their side, “because-you-know-the-Occupation”. Truly they are horrible human beings.

At this very moment, some Far Left militants are busy with a campaign to inform the world that not all UK Jews are in favour of the move of the UK Embassy to Jerusalem. It’s easy to imagine where those horrible human beings stand.

I am proud to be different.

May the memory of Stefano Taché be a blessing.  Am Israel Chai and Chag Sameach.

About the Author
Italian by birth, Israeli by choice, Rabbi of the largest synagogue in Sussex (UK). Uncompromising Zionist.
Related Topics
Related Posts