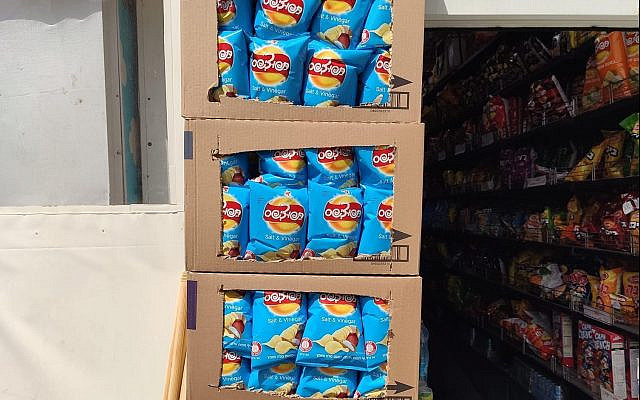 Something amazing happened this week.

Something which only a Brit living in Israel with a passion for salt and vinegar crisps could appreciate. They’re here! Finally! And not the fancy handmade type.

Proper bags of salt and vinegar crisps have appeared on the shelves in various supermarkets and us Brits are going WILD!

When I lived in Manchester, salt and vinegar was my crisp flavour of choice, naturally, closely followed by prawn cocktail (it’s OK… the Walkers ones are vegetarian) and then ready salted, at a push.

No way would I ever touch cheese and onion. I’d rather go without, frankly, even if it meant jettisoning the crisp arm of the Boots meal deal.

Since making aliyah, however, I’ve been denied this wonderful snack, which it seems so many of us here hanker after.

For years now, this longed for snack has been the subject of many a discussion amongst Brits.

For those of us living in Israel, salt and vinegar crisps are the stuff of dreams, as you just can’t get them here for love nor money.

Granted, you can buy normal crisps here, but the flavours range from bland to disgusting.

Sadly, we’ve all had to make do with the miserable flavours on offer here for years now.

Some hopefuls have tried to transport the odd bag in their cases when they’ve returned home from Blighty, but frankly this never turns out well. What’s left when you unpack is a bag of flavoured crumbs, totally useless, especially when making a crisp buttie.

That all changed this week when someone spotted regular bags of salt and vinegar crisps sitting, bold as brass on a supermarket shelf.

At first, she couldn’t believe her eyes.

She took a picture and promptly posted it on a group called Brits Living in Israel.

Long discussions followed, as the post was shared to another other group called Mancs in Israel.

Initially everyone agreed that the photo was a hoax. It had clearly been photoshopped as the writing on the packet was in English not Hebrew.

We all calmed down.

Then things started to hot up again as someone managed to find out where this prized possession had been made. A link to the manufacturer’s website set the whole thing off again as the Facebook servers went into meltdown.

I’m now pleased to report that, as of earlier today, all Brits living in Israel have unanimously agreed that bog standard salt and vinegar crisps do actually exist here.

In a supermarket in Beit Shemesh of all places.

Not much use when you live in Netanya!