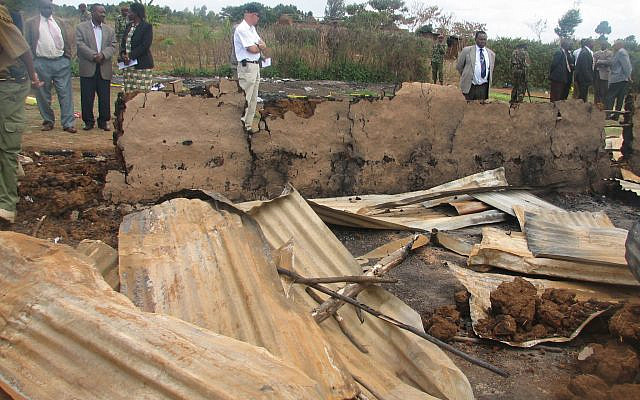 Church remains in Kenya (2007) where innocents perished after it was torched during the civil unrest. Credit: Shahar Azani

This week we commemorate Tisha B’Av, the annual day of fasting when we mourn the calamities which had befallen the Jewish people over the generations. One major catastrophe we lament for, deeply seared into our collective psyche, is the destruction of the Second Jewish Temple in Jerusalem in the year 70 C.E. by legions of the Roman Empire. The smoke billowing off the Temple marked the beginning of two thousand years of exile, out of which we only recently emerged, with the re-establishment of the Jewish State in 1948.

Tisha B’Av provides us with an opportunity to revisit one of the most famous stories in the Jewish tradition, attached to the destruction of the Temple, that of Kamtza and Bar-Kamtza, told in the Babylonian Talmud, Tractate Gittin (pages 55b-56a).

“Because of Kamtza and Bar Kamtza, Jerusalem was destroyed,” the Talmud tells us and continues: A certain man in Jerusalem had a friend named Kamtza and an enemy called Bar-Kamtza. He once made a party and said to his servant, “Go and bring Kamtza.” However, instead of inviting Kamtza, the man went and brought the host’s arch-rival, Bar-Kamtza. When the host noticed his arch-rival at the event, he turned to him and exclaimed: “what are you doing here? Get out!”. Bar-Kamtza looked around and, fearing the immense embarrassment of his banishment from the party, implored the host and offered to pay. First, he offered to pay for whatever he consumed at the party, then he offered to pay for half the cost of the party, and eventually even proposed to cover the host’s ENTIRE expense. Yet, the host adamantly refused, grabbed him by the arm and threw Bar-Kamtza out, in front of everyone. According to tradition, Bar-Kamtza was so upset with the sages, who sat at the event, noticed the entire affair and did nothing, that he went and incited the Romans against Jerusalem, thus bringing about its destruction.

Like anything Jewish, and especially Talmudic, there are so many interpretations and directions to this story. However, what remains with me is the simplest of outlooks and most important of lessons – the notion of personal responsibility to national catastrophes. What we do as individuals in our personal lives has a direct impact on us as a whole. The way we behave towards one another counts, how we carry ourselves on social media counts. This lesson is so fundamental, so basic, it too often goes unnoticed, almost taken for granted. Year in and year out, it seems we are in constant need of being reminded of it. Hatred barricades us with walls, surrounds us with shadows and fears, prevents us from looking at one another in the eye. It guarantees “others” are forever remote, distant, “not like us.” It is the engine of estrangement, in an age when positive proximity is what’s needed if we are ever to progress, evolve and develop.

This is a lesson that is not unique to the Jewish people, whose power and value are universal, hence its strength. In July 2007, I stood on stage at the center of a Nairobi megachurch. The topic was ISRAEL, but the lesson was personal. A few months before, Kenya experienced a horrible wave of internal struggle following controversial elections. The violence that killed and displaced many in that peaceful country was mainly between Kenyans of different tribes. It was an inferno of incitement and hatred, out of which the country emerged slowly, painstakingly, yet successfully, carrying with it severe wounds both physical and mental. Standing before the crowd on that sunny Sunday noon, dust filled the air as thousands of hopeful eyes were eager to hear a message from Israel. With a translator by my side on stage, I chose to read them the Talmudic story above, of Kamtza and Bar-Kamtza (Hebrew translated to English translated to Kiswahili if you’re curious) and implored: be kind to one another, for you alone hold the key for a better future. The message resonated. It sunk, and so did the understanding that we are all one. We are all human, in our faults and merits, and a Jewish lesson of old resonated with Kenyan Christians in the heart of Nairobi thousands of years later.

We don’t have to agree to understand we are one and the same, and our future is in our hands. No matter our views, heed the smoke and flames and remember the universal truth spelled in the Book of Genesis:

“By the sweat of your brow, you will eat bread, until you return to the ground, since from it you were taken; for dust you are, and to dust, you will return.”