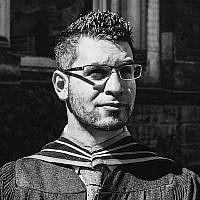 The Blogs
David Harary
Apply for a Blog
Advertisement
Please note that the posts on The Blogs are contributed by third parties. The opinions, facts and any media content in them are presented solely by the authors, and neither The Times of Israel nor its partners assume any responsibility for them. Please contact us in case of abuse. In case of abuse,
Report this post.

Speaking to a Palo Alto Jewish Community Center in 2015, Jeffrey Goldberg of The Atlantic opened a talk on the American-Israeli alliance by describing the U.S. shifting its focus away from the Middle East and towards Asia. Goldberg argues that American interests in the Middle East have been in sharp decline as the region’s instability becomes uncontainable. He then makes a prophecy that when the U.S. decides to finally move away from the Middle East, the relationship between the U.S. and Israel will only remain healthy if the two countries resemble one another. “If Americans look at Israel and see it as another dysfunctional, Middle Eastern state, then that relationship will come to a gradual end.”

Goldberg couldn’t have predicted the mass plate shifting that has taken place since this talk three years ago. However, his forecast of a growing rift between America and Israel is turning out to be true. Despite President Trump’s boasting of a strong, robust alliance, the American Jewish community, in particular, is more split than ever on supporting Israel.

Let’s be clear: most American Jews don’t like Trump. The 2016 election saw 71 percent of American Jewish voters swing towards Clinton, while Trump received only 24 percent of the vote. The left-leaning, liberal values of the majority of Jewish Americans don’t align whatsoever with Trump’s ideology and brand. Which is why Trump’s decision to move the U.S. embassy to Jerusalem made for conflicting thoughts and emotions among the American Jewish community.

The jubilation over America’s new embassy in Jerusalem juxtaposed with chaos in Gaza made for a perfect storm of mixed emotions across the Jewish diaspora. On the one hand, Jews deserve to feel joyful over finally obtaining the recognition of a capital they have been attached to for millennia. On the other is the sympathy Jews have for the pain and suffering Palestinians have endured over the last 70 years. These emotions have only been further befuddled as Israeli leaders embrace Trump as a kind of savior of the Jewish State

This unique concoction of emotions has resulted in an outpouring of confusion and anxiety now seen across social media. Discussions, debates, disagreements, and agreements among American Jews are currently raging across the worlds of Facebook, Twitter, and Instagram. To this, my message is clear: continue speaking up about Israel and Palestine.

Don’t abandon these emotions after the fire has dissipated. Instead, this moment is a call to action for learning more about the history and complexity of this conflict. It’s a call to action for getting more involved and speaking up about what you believe in. The discourse being generated by these recent events can help support an Israel that is more vibrant, more open, and more democratic. If American Jews turn their backs on Israel, however, there will only be further chaos and conflict to come.

About the Author
David is the Executive Director of the Center for Development and Strategy. He holds an M.Sc. in Sustainability Management from the University of Toronto and a B.A. in Economics and Geography and International Trade from the State University of New York at Buffalo. Originally from outside Boston, MA, David is interested in the nexus of sustainability and security in the Middle East.
Related Topics
Related Posts
Comments