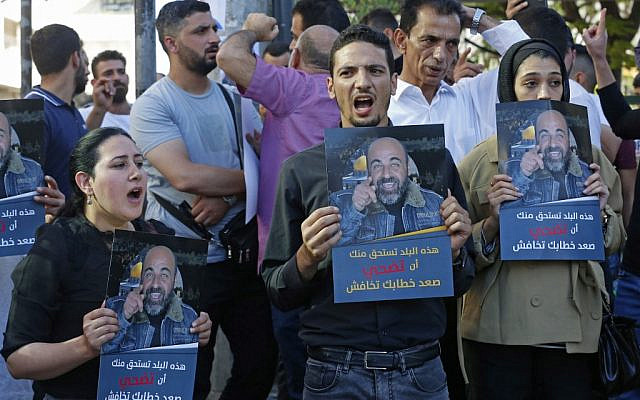 Palestinians hold posters depicting human rights activist Nizar Banat during a protest triggered by the violent arrest and death in custody of Banat, in his hometown of Hebron in the occupied West Bank, on June 27, 2021. (MOSAB SHAWER / AFP)

Never in my life did I think I would publicly and emphatically call upon other nations to help save the Palestinian people from their own leaders. But today, I must. Gone are the days of Yasser Arafat, who was adored by Palestinians from all walks of life and diverse political affiliations.

Today, Palestinians are involuntarily wedded to self-appointed Palestinian leaders both in the West Bank and Gaza. Those leaders have proven to be corrupt and ineffectual. Woefully, they are even despotic toward their own people and flagrantly violating their people’s basic human and political rights, including the right to peacefully assemble in protest.

On June 24, Nizar Banat, a critic of the Palestinian leaders who leveled fierce criticism at the PA in Facebook videos, was severely beaten when Palestinian security personnel raided his relative’s home and beat him to death. Banat was in a home in an area that is under Israel’s security control – in other words, the security forces barged into the home with Israel’s permission.

Palestinians erupted in protest, calling for the “overthrow of the regime,” and the resignation of Mahmoud Abbas. The US State Department said in a statement that it has “serious concerns about Palestinian Authority’s restrictions on the exercise of freedom of expression…and harassment of civil society activists and organizations.”

An exhaustive report issued by Human Rights Watch in October 2018 states that “the torture as practiced by both the PA and Hamas may amount to a crime against humanity, given its systematic practice over many years.”

Unlike Hamas, which is viewed by most Western countries and Israel as a “terrorist organization,” the PA is widely recognized as the legitimate representative of the Palestinian people and is accorded the diplomatic privileges of a government representing the Palestinians. What the Oslo Accords produced is the replacement of Israeli military occupation and its brutality in some areas of the West Bank and all of Gaza, with the PA and Hamas’ brutality!

It is crucial to point out that current Palestinian leaders in the West Bank and Gaza hold their political positions without legal legitimacy. A public opinion poll conducted last month, between 9-12 June, by the Palestinian Center for Policy and Survey Research reveals that two-thirds of Palestinians oppose Abbas’s decision to call off the national elections that were presumably going to be held at the end of May. A similar number of people believe that Abbas canceled the elections out of fear that he would lose to Hamas both the legislative council (parliament) and the presidency.

There are both legal and political reasons that would support the removal of the current PA and Gaza leaderships. The Palestinian “constitution” is a document called the Basic Law. It was drafted over two decades beginning in 1993. It came into force in 2002 and was amended twice since then, once in 2003 and once in 2005. Afterwards, any changes to the Basic Law were issued by presidential decrees which Abbas liberally used to tighten his grip.

According to the Basic Law, the president does have the “provisional” authority to issue decrees with the force of law in emergency situations only and when the parliament is not in session. However, presidential decree-laws that are not approved in the next parliamentary session become invalid.

Since the Basic Law was intended to cover the interim period specified in the Oslo Accords, which was supposed to end in 1999, there was no provision for re-election of the president or the legislative council. In 2005, there was a set of amendments introduced to make it possible for new parliamentary elections. These amendments fixed the term of the parliament for four years, while another provision stated that the “term of the presidency of the National Authority shall be four years.”

Mahmoud Abbas was voted as president of the PA in January 2005 while the parliamentary elections were held in January 2006. Both mandates have expired, and, without elections, Abbas has been conveniently ruling using the Basic Law and, when needed, issuing presidential decrees that none of which have been annulled because the elections for a new parliament were never held.

I appeal to the friends of the Palestinian people for help in the removal of this corrupt and morally bankrupt leadership. The Palestinians recognize that Abbas, his henchmen, and the security forces under their command are nothing but sub-contractors in the service of Israel’s security needs. For that purpose, both Israel and the Biden administration have been looking for ways to shore up and bolster their man in Ramallah.

If anything, spend your money, aid and expertise on building political and administrative institutions that respect human and political rights. Help organize free and fair elections without the intimidation of the current leaders’ henchmen. Help train and guide Palestinians to create negotiating teams to move on from the Oslo Accords.

Sending money now to pave another road in the West Bank is not necessary, and yes, Gaza needs just about everything from the ground up. And remember, the Palestinians worldwide are resourceful, possess the intellect and the professional expertise to run a state based on a solid constitution that respects human and political rights and that seeks a just peace with its neighbor, Israel, without being its security contractor.

About the Author
Professor Bahbah taught at Harvard University, where he was the associate director of its Middle East Institute. He was the editor-in-chief of the Jerusalem-based al-Fajr newspaper, and served as a member of the Palestinian delegation on arms control and regional security.
Related Topics
Related Posts
Comments
Advertisement