Last Friday afternoon at the hushed time before Shabbat as I stood amid the grassy quietude and silent hills of Israel’s national military cemetery on Mt Herzl a gentle autumn wind was blowing over the final resting place of Michael Levin, the only Israeli American Lone Soldier killed in the Second Lebanon War in 2006, a freshly lit candle flickering in a small glass box adjacent to the headstone caught my attention.

Over the many years I have been visiting the holy site of Mt. Herzl, either as a guide for groups or by myself, to pay my respects at Michael’s final resting place, together with my fallen brothers-in-arms, who will remain nineteen forever, and to all those heroic men and women who paid the ultimate price so we may live in a free and independent Jewish homeland I have rarely been moved to such profound emotion. Part of this is due to the very close friendship I am honoured to have with Michael’s parents, Harriet and Mark Levin.

In a conversation with Harriet she recalled how “Mikey” did what she always wanted to do and never did. He made Aliyah to Israel and enlisted in the IDF. Harriet said, “I always dreamed of doing more for my country, of coming and volunteering. After all, it’s the easiest thing live in a big, beautiful house in the United States and to write a check for a pro-Israel organisation every once in a while,” she explained. “I wanted to give a lot more, but I didn’t think I’d give so much, that I’d give my son.”

She mentioned that on the first anniversary of Michael’s death she and Mark were at the grave of their only son on Mt. Herzl and an Israeli woman was lighting a candle at the grave of her son who was buried four plots away from Michael. The woman heard them speaking English and approached them. The woman introduced both herself and her husband, Rabbi Eitan and Leah Eisemann. After hearing that they only get to visit their son’s final resting place once or twice a year Leah volunteered to light a candle at his grave every Friday, together with the candle she lights for her son Tzvi. Harriet told me that since that moment the same righteous woman has been lighting a candle by Michael’s grave every Friday and phoning the Levin family in the States. This is true kindness. Sometimes it is the small things in life that make a huge impact, such as lighting a candle on a grave. 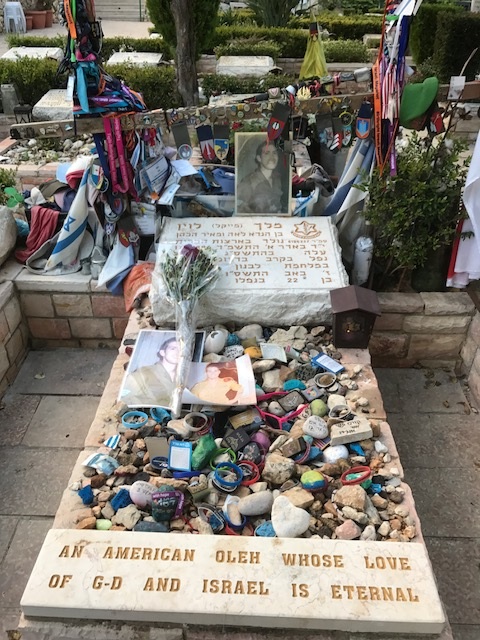 Michael Levin’s final resting place on Mt Herzl with the lit candle. Photo (C) T. Book, 2017
About the Author
Dr. Tuvia Book was born in London and raised in both the UK and South Africa. After making Aliya at the age of 17 and studying in Yeshiva he volunteered for the IDF, where he served in an elite combat unit. Upon his discharge he completed his BA at Bar-Ilan University, as well as certification in graphic design. He then served as the Information Officer at the Israeli Consulate of Philadelphia, while earning a graduate degree in Jewish Studies. Upon his return to Israel, Dr. Book graduated from a course of study with the Israeli Ministry of Tourism, and is a licensed tour guide. Tuvia has been working in the field of Jewish Education, both formal and informal, for many years. He has guided and taught Jewish students and educators from around the English-speaking world for some of Israel’s premier educational institutions and programs. Tuvia has been guiding groups for Birthright Israel since its inception and, in addition, has lectured throughout North America, Australia, Europe and South Africa. Tuvia served as a Shaliach (emissary) for the Jewish Agency for Israel as the Director of Israel and Zionist Education at the Board of Jewish Education of Greater New York (Jewish Education Project). He was a lecturer/educational guide at the Alexander Muss Institute for Israel Education (AMIIE) in Israel for a decade. Tuvia has lectured at both Bar Ilan University and Hebrew University. He is a Senior Editor and Teaching Fellow at the Tikvah Fund. Tuvia is the author and illustrator the internationally acclaimed Israel education curriculum; "For the Sake of Zion; A Curriculum of Israel Studies" (Fifth edition, Koren 2017), and "Moral Dilemmas of the Modern Israeli Soldier" (Rama, 2011) and has a doctorate in Israel Education. His latest book, "Jewish Journeys, The Second Temple Period to the Bar Kokhba Revolt – 536 BCE-136 CE," will be published by Koren this year.
Related Topics
Related Posts
Comments
Advertisement