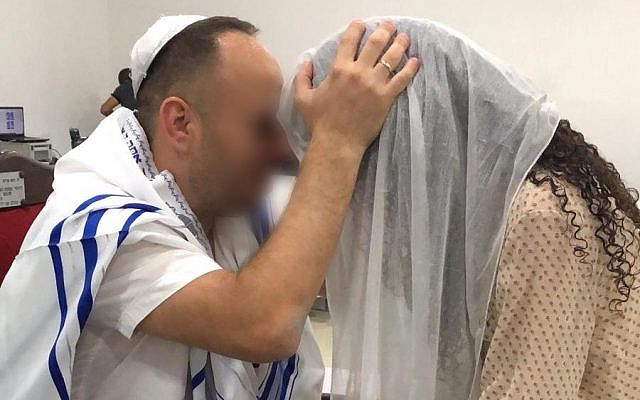 I always answer my phone even if it’s an unlisted number. In my line of work, every call could be a future client, and many of them are. But my insistence on doing so can lead to some unintended consequences. I definitely speak to more solicitors than I’d prefer. But I also get a consistent amount of Brit Milah-related shaylot (questions).

All rabbis get questions and often the caller launches into the inquiry without identifying himself. It can be about any topic under the Jewish sun. Still, my questions tend to be more circumcision-related. Some ask if the healing process is going according to plan, others ask if there should have been bleeding when the bandage was taken off, and still others if things are aesthetically the way they should be.

Keep in mind, these questions are not from my clients. The callers find my information online and want a second opinion. I’m used to this regular occurrence and since I have no personal connection to the caller, the interactions are fleeting, quickly resolved and forgotten. But that was not the case with my last ‘cold call’.

The individual asked me a question I had never received before. He didn’t inquire about how best to deal with post-care for his newborn. In fact, he wasn’t a father at all. He explained, “My sister just had a baby boy and wants me to be the Sandak.” I responded, “Mazal Tov.” The caller continued: “My wife and I have been married for five years and we have no children. A rebbetzin we know and respect told us that I can’t be the Sandak because if Eliyahu HaNavi sees me sitting in his chair, he’d think I was the baby’s father and then we wouldn’t conceive.” I assured him that I’d get back to him quickly with a response, but I wanted to look up the answer first.

There was no doubt that the rebbitzin’s statement was of kabbalistic origin and that halachically he was permitted to be the Sandak; but I could hear the stress in his voice and I wanted to give this query its due diligence.

When studying to be a rabbi, one inevitably learns a certain parable about a woman who comes to her rabbi, disheveled and despondent on Friday afternoon. She tells the rabbi that she has no chicken soup for Shabbat and concernedly asks if this is halachically acceptable. The rabbi proceeds to pull down the Shulchan Aruch and feverishly flips through, until he lands on a page, saying, “Here it is! Yes, it is fine not to have chicken soup on Shabbat.” The woman, relieved, thanks the rabbi and heads home.

Of course, it doesn’t say that anywhere in the Shulchan Aruch, so what was the rabbi’s intention? He did this because you treat every question with honor and respect. If you belittle a question like this, there’s a good chance when he or she has a more serious shaylah, they’ll be too embarrassed to ask. In addition, one should always look up questions to make sure they are remembering correctly and to keep the texts fresh in one’s mind. So, for these reasons, I took the time to look up the answer.

Britei Shalom, is a modern work on Brit Milah that even deals with such questions as: should a Shabbat Bris, where the baby was conceived through IVF, be done on Shabbat? (FYI, according to the Britei Shalom, it should be.) It’s an impressive work. In the chapter dealing with who can be a Sandak he writes:

It’s possible to give a non-married man [the honor] of being the Sandak. However, it’s preferable whenever possible, that it be a married man. However, if someone gives [the honor] to a child who is younger than age 13, it’s fitting to prevent something like this.

Once I found the answer, I promptly called the gentleman back and told him that he is halachally permitted to be the Sandak. I explained that if someone who is single is allowed to hold the baby during the Bris, then all the more so he should. It’s clear from the wording that the Britei Shalom is not concerned with a single man’s future progeny. The caller thanked me for the help and we parted ways. And as usual, I soon forgot about the interaction.

About a week later I received a picture via text of a man sitting in a Kisei Eliyahu. At first, I was confused. I didn’t recognize the man. Every now and again, parents send me pictures of the Britot I’ve performed. But I was not in any of these pictures.

Then it dawned on me –– it was the Sandak.

No anonymous questioner had ever reported back. I took the opportunity to ask the million-dollar question (which was actually something posed by my wife). Just after the Bris, the Sandak can put his hands on someone’s head and give the person a blessing for such things as health, happiness, financial security. So, I inquired, “Did you bless your wife with a child?” He just sent back the above image.

May they be blessed with a child soon.