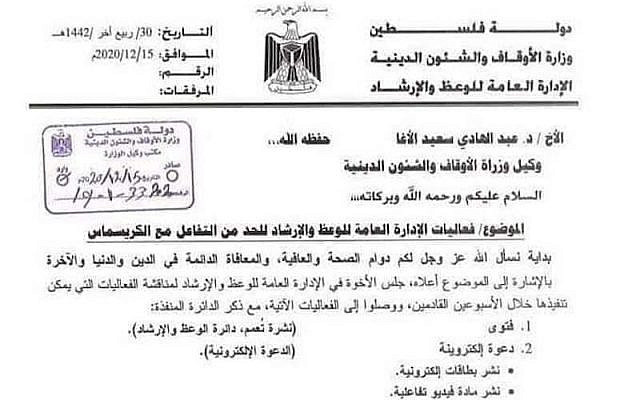 Detail of 'The Activities of the General Authority of Preaching and Guidance to Limit Interaction with Christmas,' directive dated 15 December 2020 and issued in the Gaza Strip

Say what you will about the Palestinian Authority, Palestinian Christians in the West Bank are treated as equal to Muslim Palestinians. In fact, if you look at the composition of the PA government, five ministers are Christian.

When I served as Yasser Arafat’s advisor on international affairs, while I was teaching and working at Harvard University, I asked him why he decided to designate a fixed number of seats in the Legislative Council for Christians and one seat for a Jew to represent the Samaritans in the Nablus area. I also asked him why the government decreed that several municipalities including Bethlehem, Ramallah, Beit Sahour, and Beit Jala, should always have Christian mayors irrespective of the number of Christians in Palestine or in those towns.

He answered me: “Don’t be naïve. When I am gone and I am not here to protect you [Christians], one day there could be a [Palestinian] government that, if it could, would eat you alive.”

And it appears, Arafat was right.

An official advisory issued from a Hamas ministry last week smacks of racism and spite against Christians in general, and, more specifically, against the tiny and dwindling Palestinian Christian community in the Gaza Strip. Addressing the upcoming Christmas holiday, the document recommends a series of measures to “limit interaction” with Christmas celebrations in Gaza, implying that Christianity and Christians should be shunned.

While some have tried to suggest the instructions are motivated by concerns about crowds and Coronavirus, the document itself makes no mention of the spread of the pandemic. It is, in fact, a religious directive from Hamas’s Director-General of the General Authority of Preaching and Guidance in the Hamas-controlled Ministry of Wakf and Religious Affairs. 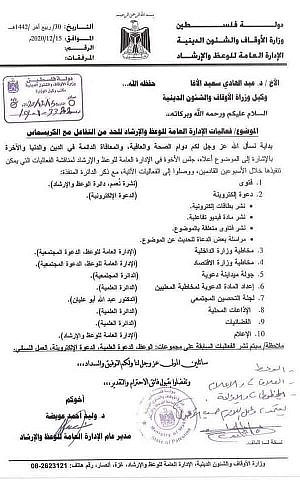 ‘The Activities of the General Authority of Preaching and Guidance to Limit Interaction with Christmas,’ directive dated 15 December 2020 and issued in the Gaza Strip

“The Activities of the General Authority of Preaching and Guidance to Limit Interaction with Christmas,” dated 15 December 2020, calls for the issuance of a fatwa, a religious edict, and instructs various ministries including the ministries of interior and economy, as well the media to ensure its implementation. As a Palestinian Christian, I abhor the document and those who drafted it.

On Saturday, after the document had made it to social media and sparked denunciations from Muslims and Christians, Hamas’s Ministry of Wakf and Religious Affairs issued a clarification insisting their policy reflected “the tolerance rooted in Islam, which sanctions freedom of worship.” It added that the Hamas government “secures [Palestinian Christians’] religious rituals and protects their churches and places of celebration.”

As the direct descendants of Jesus Christ’s followers – descendants of Jews and non-Jews who converted to Christianity — we were present in the land of Palestine before Islam arrived in the seventh century. Since then, relations between Muslims and Non-Muslims were regulated by an agreement known as The Pact of Umar that guaranteed rights and spelled out obligations. In today’s Palestine, the pact primarily represents the commitment of Muslims to respect and protect the religious and property rights of Christians and Jews.

I recall when I was growing up in the Old City of Jerusalem, Ramadan was one of our favorite holidays. We shared food with our Muslim neighbors; we watched the best Arabic soap operas together; and we loved to hear the voice of the Mussaher, the person who goes around before sunrise to wake people up to have their meal before the fast begins. And I remember the good wishes of our Muslim friends and neighbors when we celebrated Christmas.

Hamas, to you I say, we Palestinian Christians have always been an integral part of Palestinian society. We are part and parcel of the fabric of the country. We love our land and nation more than you ever will. You serve a foreign power, Iran, smuggling in useless arms and firing them at your masters’ command.

Your bigoted attitude toward Palestinian Christians disqualifies you as a legitimate political party in Palestinian politics. Your zealotry brought intolerance and animosity among our people. Come what may, we will liberate the people of Gaza – both Muslims and Christians – from your despotic clutches. Those who supported you shall be cast out as traitors and racist collaborators. You have lost all semblance of legitimacy in the eyes of the Palestinian people and the world. You represent no one but your pitiful selves.

It is a shame there is no land bridge between the West Bank and Gaza that would allow Palestinian security forces to march into Gaza and forcibly rid it of the cancer called Hamas. And those who support and finance you and those who train you and harbor your leaders are as guilty as you are.

Let it be a lesson to anyone who tries to insult, marginalize or belittle Palestinian Christians, whether from within or from outside: The day will come when Palestinians – Muslims and Christians and many people around the world – will rid Gaza from you and your tyranny.