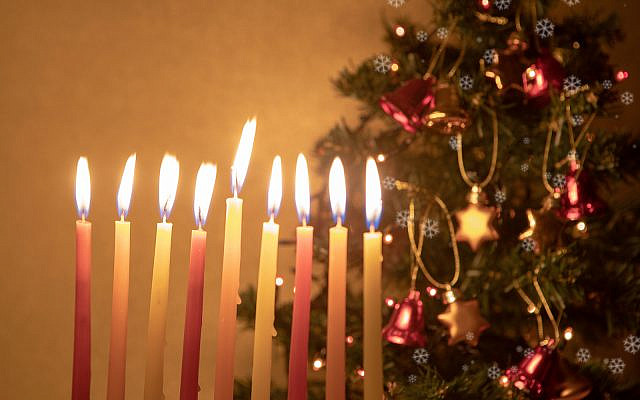 Hanukkah is not Judaism’s most important holiday. But it has become the most representative, as it were – the Jewish answer to Christmas.  On most years there is some overlap in dates, and this has led to various expressions of commonality or sharing. Some Israeli public spaces, not to mention spaces in the United States or elsewhere,  are being gradually crafted in light of a joint celebration. At the same time, Christmas has become a focal point in an ongoing battle of identity in other public spaces. More than anywhere else, so-called interfaith families have found ways of celebrating the two in tandem. For some, coming to terms or making sense of Christmas in Jewish terms has itself become a need of Jewish survival.

Is the Hanukkah-Christmas juxtaposition only a matter for people with weak religious identity? Does it only serve the cause of the assimilated, intermarried, religiously-compromised? Is there a vision of the two festivals that could speak also to religiously committed individuals on both sides, in whatever situation they may be? And could we provide a deeper meaning for those who already bring together the two festivals, even if they do so only for personal, familial or cultural reasons?

Here is an attempt to provide such a teaching.

Typically, both festivals are understood as celebrating something of the past. Hanukkah celebrates the victory over the Hellenists, and the ensuing purification of the Temple. Christmas celebrates the birth of Jesus. On the face of it, there is absolutely no commonality between the two, and tying them together is a case of religious kila’yim, an inappropriate crossover of species.

There is, however, another way of looking at Hanukkah, one that is future-oriented, rather than past-oriented. There is a celebrated Hasidic teaching that the lights of Hanukkah carry in them the hidden light, or haganuz, or in a parallel formulation, the light of Messiah. The teaching is attributed to R. Pinchas of Koritz (d.1791), a contemporary and disciple of the founder of Hasidism, the Ba’al Shem Tov. It is echoed in numerous Hasidic works. Some develop the matter even further. For example, this leads to the analogy between two types of candles and two types of messiahs. The light of Hanukkah corresponds to the preparatory light of Messiah son of Joseph. The light of Shabbat corresponds to the light of Elijah the prophet, who paves the way in peace to the coming of Messiah (Shem Mishemuel, Miketz – Hanukkah). The Imeri Emet (parashat Vayeshev), authored by the head of the Gur dynasty who passed away in Jerusalem in 1948, makes the point that in essence Hanukkah performs a messianic task. What Hanukkah lights do is to turn the public space, reshut harabim, into private space, reshut hayahid, in other words, to elevate all public, commercial, outgoing concerns to concerns of the singular divine, raising all life to holiness. This, he claims, is also the work of Messiah.

The association of Hanukkah and messianic light or messianic work opens the door to a new appreciation of the festival. We are not simply recalling the past. We are laying foundations for the future. We actualize a future reality of the transformation of the world, of our public space, by bringing the light of God, the singular light, carried by Messiah, into today’s world.

Such an understanding, I would like to suggest, allows us to revisit the relationship of Christmas and Hanukkah. In this light, both festivals celebrate the same ideal, that of messianic light coming into the world and transforming it. With the increasing commercialization of Christmas, as well as Hanukkah, the festival(s) has become a commercial-cultural expression, devoid of true spiritual significance. There is no difficulty in creating a crossover between two festivals of two religions, both of which have been flattened out in terms of their spiritual significance. This is what most of Christmas-Hanukkah is about. There is, however, another way of going about relating the two, by seeking their deeper common spiritual message. Such an approach speaks to the religiously committed on both sides, and could provide deeper meaning to those who already find themselves in crossover situations.

For this approach to work, must Jews accept Christian claims regarding the identity of the Messiah? Not at all. Today we face a global battle between the “public space” and “private space,” between a world that is defined by commercialization, materiality, and a culture of acquisition, and the private space of genuine faith and belief of a higher reality that has the power to transform the exterior world. The battle lines are not between Jews and Christians. They are between those who uphold a vision of a transformed future in light of spiritual ideals held for millennia by religious traditions and the various societal forces that lead to the erosion of memory, identity and spirituality.

Let us then consider Hanukkah and Christmas as times of aspiration for that higher ideal to which both traditions aspire, to the truly transformative light of Messiah that the world awaits. That aspiration can lend deeper meaning to the existing reality of the parallel or joint celebration. It invites all to consider how these festivals can be transformative, an alternative to prevailing cultural norms, much as Hanukkah itself was a battle for a higher vision in the face of contemporary cultural norms. The light of Messiah, celebrated in diverse ways in both traditions, can then be recognized as a light of peace that is shone into the world by people of faith.