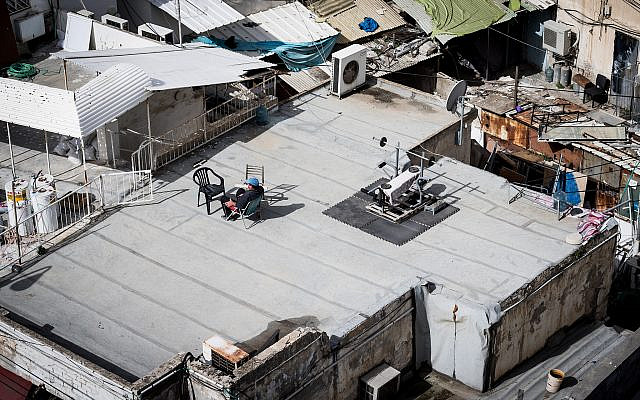 A man sits on a roof in Tel Aviv (source: Daniel Lerman, Unsplash)

During the past twelve months, I interviewed people in Shapira to see how they wound up there and what they think of the things happening in the neighbourhood. Here’s what one shopkeeper had to say.

I was born in Turkey, in Istanbul. I left Turkey because in that time there was a lot of anti-semitism. I was studying there in a school and there would be a lot of problems if they knew that you were Jewish. So I came to Israel because I was 17 and I was at the age when I would have had to go to the army in Turkey. I came here alone. My parents still lived in Turkey, they had no life here, but then after seven or eight years they also moved here to Israel.

We had a good life in Istanbul but I was born in another city, Edirne. Do you know Turkey? After Istanbul, there’s another city, called Edirne. It’s to the west. After Edirne, there’s Bulgaria – it’s on the border. We grew up speaking Turkish but also Ladino, you know, like Spanish.

When I moved to Israel, I went to Haifa – I wanted to go to a kibbutz. But they said, ‘there’s no kibbutz, you’re a soldier.’ So I did this and that and ended up in the military. I did two years in the navy.

A lot of people moved here to Shapira. From Greece, from Turkey. It was a Sephardi neighbourhood. I lived here in Shapira by the time my parents moved to Israel from Turkey and they lived here too. I left the area because I got married…..I got married and then we had children and all those sorts of things, so we moved to Bat Yam. Shapira was a really good neighbourhood then. It was like [central Tel Aviv]. Now, ten or eight years ago, all of the Sudanese came and destroyed the neighbourhood. That’s why people say that it’s not a good area now.

It was a good place before they came….there was a shortage of housing though. I got married here but I didn’t have a house. You had to look for a place with a room or a couple of rooms. But apart from that it was a good life. Today, you have to pay so much money to live here. And all the people from Eritrea and Sudan. They throw rubbish in the street, from their windows. I want to leave. This building is supposed to be demolished but I paid money for it. If the owner of the building gives me money back then I can leave. It was a better life before, with the Sudanese and Eritreans, we don’t know their language.

I’m not afraid of them. Listen, a lot of people don’t want to live here in this neighbourhood now. First of all, there are no houses. Someone with money, he can buy a house or build one.  In the past, everyone knew each other. Someone from Bulgaria, from Turkey, from Greece – even people from the US and Spain. But as the neighbourhood became worse, everyone left.

In the past, four girls used to work here with me. They were Iranians, good people. There used to be a lot of work but now because of the internet, there’s not so much. I try to sell books to people like you or buy and sell old ones from other people. I also sell to people with kids, I have children’s books.

Of course I have good memories of Shapira. There were more young people, I was younger too. I had friends here….some of them there, some of them here. It was a different world. There was work as well. Everyone worked. Then the people from Sudan and Eritrea came. They have a different mentality, you understand? But I understand it. They came from a bad situation.

Do I feel Turkish or Israeli? What a question! Of course, I feel Israeli. I’m a Jew from Turkey. I wanted to come here. Israel is our country. Everyone who is Jewish has to live here – even people that aren’t Jewish should live here! If there was peace in this country, it would be better than America.