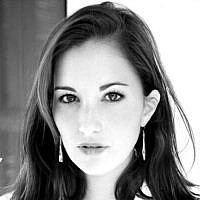 The Blogs
Carolina Rodríguez Hernández
Apply for a Blog
Please note that the posts on The Blogs are contributed by third parties. The opinions, facts and any media content in them are presented solely by the authors, and neither The Times of Israel nor its partners assume any responsibility for them. Please contact us in case of abuse. In case of abuse,
Report this post. 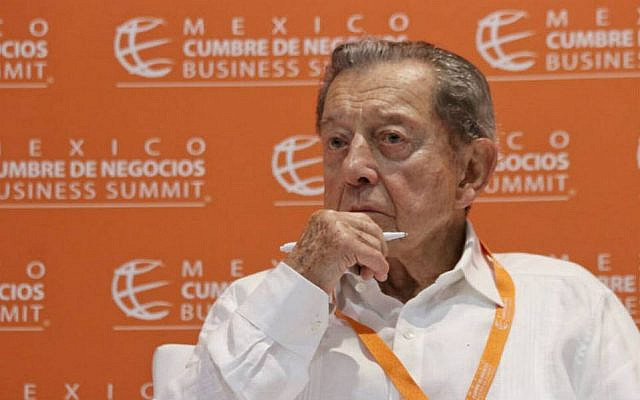 We had a conversation with Miguel Alemán Velasco, a Mexican politician, businessman and philanthropist. He is a former senator and governor of Veracruz and the son of Mexican president Miguel Alemán Valdés (1946–52), the first candidate to run for the presidency from the Institutional Revolutionary Party and first civilian president in the modern era. Currently Aleman is on the board of directors of Interjet airline, Miguel Alemán Valdés Foundation, President of the Mexico Business Summit, Alemán Velasco y Asociados and the San Carlos Museum.

Carolina Rodríguez Hernández (CRH): What does Mexico in the 21st Century mean to you?

Miguel Alemán Velasco (MAV): Mexico in the 21st Century is a country that is decided to innovate and transform into opportunity. The global pandemic strongly affected Mexico, the tourism sector, that is vital for our country was severely affected. Hotels, restaurants, airlines, are having a very difficult moment, however, Mexico has a privilege in North America. We need to take advantage at a maximum scale of the new commercial agreement to innovate in technology that helps boost our growth. In order to take advantage those opportunities, we need to increase the security of the population, decrease the uncertainty as an obstacle to the business and the Mexican people, reinvest in Mexico and restore the confidence of the foreign investors, Mexico will be among the countries that will have a growth in 2021.

In this new normality and for the current government, innovation is a must example, one of the most successful programs driven by the authorities during the pandemic has been “Learn at Home”. Through television and free internet education will reach every child and young people in Mexico, from kindergarten to high school. Training teachers, as well as parents to use these tools represents a great challenge. Communications will be a fundamental factor in order to make education and innovation a reality. We really have a lot of faith in the work and talent of Mexican people, but we know, we need to do better.

CRH: How should businesspeople work with the current Mexican President, Andrés Manuel López Obrador to stop the deterioration of the social and economic situation in the country?

MAV: There are different ways in which businesspeople could work with the Mexican government, but it requires a new thinking for the companies to ensure a sustainable growth in the country. The fourth transformation promise to do away with the abuses from a privileged group that have plagued Mexico in recent years. López Obrador defined the first three transformations as the Mexican War of Independence (1810-1821), the Reform War (1858-1861) and the Mexican Revolution (1910-1917). Businesspeople, as well as citizens, must cope with a tax reform and we have to find a way to create incentives to achieve the goals that the current government and the private sector propose. On the other hand, government must create a good environment in order for the private sector to grow invest in innovation and technology. Also, the federal government will need to work closely with the states governments and municipalities.

CRH: Did the Mexican Business Summit 2020 meet your expectations?

MAV: Because COVID-19 pandemic, from November 8th to 10th was with the support of the Mazatlán, Sinaloa government as host, it was a great success. As expected, we had a dialogue on a better pathway the private sector and the government to work in a friendly way. The current challenges which Mexico and the world faces require of a new thinking that allows to take advantage of opportunities that are emerging, those that could secure a sustainable growth for our country.

The goal of this meeting is to solve doubts, overcome divisions and to generate innovative proposals to face the new challenges. This way, we will have strong and stable companies, adapted to new circumstances that could guarantee the future jobs for the Mexican people, in such a way that together, businesspeople and the country we will come forward. 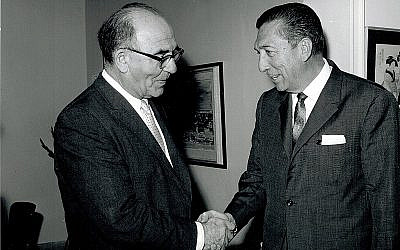 Prime Minister of Israel Levi Eshkol and former President of Mexico Miguel Alemán Valdés on his visit to Israel, November 18, ’63.
Source https://eshkol.localtimeline.com
About the Author
Carolina Rodríguez Hernández is Mexican born, Costa Rican recognized impact journalist, photographer and leader in the social sector for advancing social entrepreneurship as a model for tackling the world’s most pressing problems. She´s also the founder and creative force behind RSChicLux, a Spanish language subscription-based digital media company on social responsibility and impact investing issues around the world. RSChicLux will publish daily articles and will not have any ads on its site. Carolina currently is doing her undergraduate studies on social responsibility at the Jewish ORT University and previously take courses in photography.
Related Topics
Related Posts
Comments